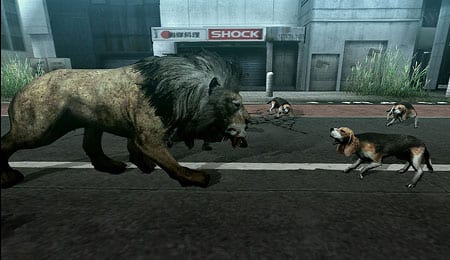 Alright, I’m going to try to make it through the opening without a Guns N’ Roses reference, but I’ll be honest with you, it’s going to be an uphill climb. Originally released this past June in Japan, Sony’s Tokyo Jungle is the kind of quirky title that rarely makes it stateside. It’s survival action with a twist — you’re not a person, you’re a Pomeranian (or a cat, a hippo, a dinosaur, etc.). Welcome to Darwinism at its most primal. Welcome… to the jungle. Ugh, see!? I knew I couldn’t do it!

In the “kill or be killed” world of post-humanity Tokyo, being able to deftly control your animal of choice is critical to your very survival. For the most part, the game holds up well in that regard. The most basic actions, such as jumping and attacking, are mapped to the face button while the shoulders house the hunting functions: creep and clean kill. Flicking the right stick executes a quick dodging move, though you can also use it to gain ground while pursuing would-be prey.

For all carnivorous classes, the hunting serves as the most important aspect of the game. Sneaking up on animals will cause a pair of red jaws to appear over them, and once they turn solid red pressing the right bumper strikes a fatal blow. If the jaws are purple, that means you are being targeted and must move the right analog stick when they turn solid lest you incur major damage.

It’s a system that generally functions well, but one that is held back by the inability to manipulate the camera at all, which limits the scope of your vision. A mini map will show dots to indicate other animals in the area, which is fine except that it provides no additional information. Plus, since you can’t pan around, you’re never sure if you’re walking toward a handful of bunnies or a pack of deadly hyenas. And even if you know what’s over there from a previous chase, there’s no way to ascertain whether or not your prospective meal is facing you and ready to bolt as soon as you get close to them.

With modest detailing in the environments and some muddy looking textures on the animals, Tokyo Jungle is hardly a graphical powerhouse — to the point that it would’ve felt at home on the PS2. Things animate smoothly, though, and the pouncing “clean kills” are always satisfying, particularly when you use stealth to take down a larger critter. For a game built around animal-on-animal violence, the developers do an admirable job of producing something visceral yet not excessive.

There isn’t much emphasis placed on the music, which is probably a good thing as the up-tempo beats feel completely out of whack with the game’s theme. Animal sounds aren’t as effectively used as they could’ve been, either; instead of serving as warnings of what lies ahead (or behind) they’re simply there because, well, animals make them.

Humanity has mysteriously vanished — the causes of which unravel as you progress — and now the streets of Tokyo are walked by animals of all kinds. The ultimate goal of Tokyo Jungle is simple to classify (survive at all costs) but much harder to implement with obstacles such as a limited food supply, presence of predators, toxicity of the environment and even a finite life cycle all standing between you and your goal.

A fairly short tutorial introduces the basics, but beyond that you’re unceremoniously dropped into the game and left to figure out what works and what doesn’t via trial and error. The screen is adorned with three meters: one for health, one for hunger and the last for stamina. You’ve got to eat (or drink) to keep your hunger meter full because if it goes to zero you’ll lose health and starve to death. Predators can also drain points from your health by attacking. Stamina depletes when using your dodge, though it was never really an issue in all the hours I played.

There are two modes of play: Survival and Story. In a somewhat counter-intuitive decision, you’ll need to start in the open-ended Survival mode to unlock sections of the structured Story. This is done by collecting archives that are scattered about the streets of Tokyo. From there you’re able to play a section of the story that is focused around a specific activity or objective.

Although Tokyo Jungle is wholly unique, the gameplay is repetitive by design. Each time you load up a game you start at Year 1 and must set out to stay alive. There is a list of goals to attain, divided up based on the number of years you’ve survived, that can differ, but ultimately you’re racing against the clock to stay fed, mark your territory and attract a mate — in that specific order.

Areas will have a set number of points that must be marked to claim that zone, which allows you access to a nest and also causes females to appear. As in the real world, not all females are created equal, however, and to attract better breeding stock you’ll need to level up your male to alpha status by consuming enough calories. How much of your attribute growth carries forward depends on your partner’s genes, as does the number of offspring you produce.

The game pushes forward, generation after generation, allowing you to travel in packs and take on bigger animals. Each creature also has a specific goal that unlocks a new animal for Survival mode, meaning to unlock them all will take a very long time indeed. It’s here that the repetitive nature of the game becomes a detriment since ascending the food chain is such a lengthy process.

For better or worse there is also a level of randomness to it. On the plus side it keeps every life cycle from being identical. Negatively, though, there are times when things just go wrong and there’s nothing you can do to fix them. For example, you might run the streets for minutes at a time without finding a possible food source; yes, it creates tension and desperation, but it can also undermine a lot of hard work without you doing anything wrong.

It’s probably safe to say you haven’t played another game quite like Tokyo Jungle; it has some issues with unimpressive graphics and repetitive gameplay, but the freshness of the concept is enough to make it a solid purchase.

By Herija Green
This entry was posted on Friday, September 28th, 2012 at 1:40 pm and is filed under Herija Green, Video Game Reviews. You can follow any responses to this entry through the RSS 2.0 feed. Both comments and pings are currently closed.