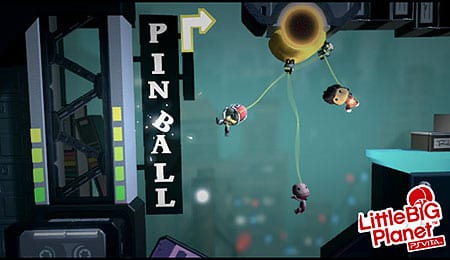 Nothing worse than getting kicked in the ball.

Sony has done an admirable job in bringing many of its signature exclusives to the Vita, but while those ventures have met with varying degrees of success it’s safe to say that none of them have truly matched the depth found in the company’s console counterparts. Developer Tarsier Studios looks to change all that with the release of LittleBigPlanet Vita, a creative platformer that truly emulates, and in some ways even surpasses, the lineage of its PlayStation 3 predecessors.

If you’ve played LittleBigPlanet before you know the fundamentals of gameplay… that means the slightly floaty platforming elements and sometimes wonky swinging physics have returned. Viewed from the perspective of maximizing the Vita’s control capabilities, however, LittleBigPlanet Vita represents the high water mark for the system.

Manipulating objects and switches using the front and/or rear touch screen just feels right in the whimsical world of Sackboy. You’ll also utilize the tilt function to roll objects and go back to the front screen to guide projectiles around obstacles to their destination. There are occasional hiccups, such as your finger obscuring said projectiles or movements being too fast to recognize, but overall the game does a great job of keeping your fingers active.

There are also a number of mini games that have you turn the Vita at a 90-degree angle to even allow you to go head-to-head in local two-player action. It comes across as a natural fit, and the development team deserves serious kudos for its ingenuity.

In a world built upon imagination the sky is the limit, and in the tradition of previous games in the series, Sackboy’s inaugural Vita adventure is cleverly done. Each of the story’s levels has a unique yet still consistent style with bright colours that hold up well on the OLED screen — it’s not as crisp as what we’ve seen on the PS3, but the reduced size seems to suit the source material better.

Narration is once again provided by Stephen Fry, whose calming voice sets the tone. Cinematic scenes are also well acted with lively characters punctuating each level. There’s a solid, albeit familiar, soundtrack in place to accompany the action as well. My lone complaint here is the sometimes annoying gibberish characters speak during in-game sequences that accompany word bubbles.

Light-hearted fare is expected with LittleBigPlanet, and that is certainly the case with this installment as you must rescue the residents of Carnivalia from an evil Puppeteer. As with previous LBP games, the true purpose of the campaign is really to provide you with a breakdown of how all the various bells and whistles function so that when it comes time for you to create content you’ll have a grasp of how these divergent elements can be combined.

Even as a glorified tutorial, the story mode here is the most enjoyable in the series. The availability of the touch screens and tilt function really let the developers get creative, and though the difficulty level of a LittleBigPlanet game is never going to get too high it felt like there was just a lot more going on during the campaign this time. Plus, as has been noted in reviews of other Vita games, small levels translate very well to the handheld — something LBP excels at.

All told there are 40 levels spread across five unique locations, though a number of those are mini games, which are unlocked by finding keys in the story levels. Many locations also have areas that can only be accessed when playing with another person. High scores are once again achieved by collecting as many item and score bubbles as you can with multipliers available if you move quickly enough. It should take a few hours to clear the campaign, but if you want to get 100 per cent of the items and ace all the stages (read: don’t die) that number can balloon.

Beyond those primary stages, LittleBigPlanet Vita also includes an arcade area that features five more mini games. This may not sound like something significant given how many mini games can already be found during the story mode, but these are completely different. They don’t have anything to do with Sackboy or any connection to the LBP universe. Instead, they’re there to serve as yet another example of what can be done independent of the series’ signature platforming.

Of course, where LBP has always gotten its nearly endless replay value is from community creations, and once again that is a huge part of the game. An in-depth level editor is at your disposal; even if after watching all 60-plus tutorial videos the process still isn’t an easy one. That’s OK, though, because you don’t need to create a single thing to reap the benefits.

Even with the game available to the public for a very short time, the community section is already filling up with clever user-generated content. Some test your platforming mettle, some are meant to spark nostalgia by recreating other games within LittleBigPlanet Vita, and others are simply intended to lighten the mood with a laugh or two. Sorting through and rating levels is easy with the best ones featured in the “Cool Levels” area. As with the user content, online multiplayer is easy to jump into and functions extremely well.

While it may not be a game that sells hardware, LittleBigPlanet Vita is arguably the definitive game on the system thus far. It’s well designed, utilizes the Vita’s capabilities smartly and has a format that’s ideal for abbreviated play sessions. Plus, it’s the first of Sony’s heavy hitters to have a portable version that’s better than the console one it’s based on.

By Herija Green
This entry was posted on Saturday, September 22nd, 2012 at 12:13 pm and is filed under Herija Green, Video Game Reviews. You can follow any responses to this entry through the RSS 2.0 feed. Both comments and pings are currently closed.