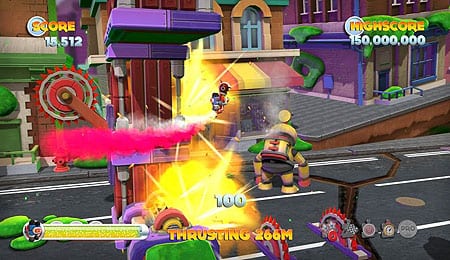 Jetpacks, a saw blade’s only weakness.

Go check out any action flick and you’ll see the work of stuntmen. Whether it’s behind the wheel doing 180 burnouts on a highway at dangerous speeds, punching out bad guys for no good reason, or just simply being that guy who catches on fire, stuntmen work behind the scenes doing the hard jobs actors can’t; and modern cinema just wouldn’t be what it is today without their tireless efforts. Enter Joe Danger 2: The Movie by Hello Games, which puts you in the shoes of the greatest stuntman in the business, Joe Danger. Blockbuster movie stunts are his game, and from the look of things, this one’s going to be an instant classic.

A stuntman’s repertoire would be useless without a handle on how to use it, and as luck would have it, Joe Danger 2 delivers in the best way imaginable. You’ll drive a menagerie of vehicles, each accelerated and slowed like any racing game out there. Jumping, boosting, stomping and the like are tackled with the face buttons, so you’ll never have to worry about button hunting when things on screen start getting pretty speedy.

Of course, what would a stuntman be without tricks? Flips, manuals and endos are handled easily with the left stick, while all manner of other showboating oddities are pegged to the left and right bumpers. Tricking isn’t just for show either, as big stunts reward the player with boost and, honestly, who doesn’t want more of that? With so much at his disposal, you’d think Joe might stumble, but the setup is handled expertly, letting anyone get in on the action at a moment’s notice.

The first thing you’ll notice about Joe Danger 2: The Movie is that it’s full of life. It doesn’t matter if you’re speeding down ancient tunnels in a mine cart or flipping down the street on a motorcycle, the world is alive and vibrant. Joe Danger takes classic movie themes that you’ve seen a hundred times and puts a whimsical, almost childish charm to every single one, making each experience warm and inviting. Missile silos, rival Team Nasty and even bank robbers will cross your path but none of it is off putting, far from it; you won’t want to stop playing because you’ll just need to see what pops up next.

Lovingly heaped upon the visual greatness is a soundtrack straight from the drive-in. You’ve watched the movies before, you know what to expect, and Joe Danger delivers the perfect feel and tone for each of the genres it tackles in its stunt-filled adventure. From the main theme’s hopping ’80s groove to the futuristic styling of the robot levels, nothing feels out of place, and everything delivers more than what you could hope for.

Joe’s been in the biz for a while. He knows what he’s getting into, but this’ll be no picnic. The greatest action movie ever made doesn’t film itself, nor does it do its own stunts. That’s where you come in, controlling Joe at his best; you’ll throw him through Movie Mode, playing out big screen action scenes in front of the camera across six acts, with genres ranging from the classic spy flick to Indiana Jones’ adventure, with Joe doing everything from jet packing across city streets crowded with robot invaders to careening down rickety rails in nothing but a mine cart.

Levels play out like a mad mix of Trials HDand Mario, with collectables and objectives strewn about an obstacle course of explosive movie magic. You’ll rocket across movie sets on numerous vehicles, jumping and ducking all manner of explosives, blockades and other hazards in levels crafted like cinema’s greatest actions scenes. Playing within their genres, levels task you with special objectives like stopping missile silos from launching or smashing dinosaur eggs on the way to the finish line.

Others go deeper than that, challenging you to complete the scene in one long continuous stunt combo, or hunt for hidden collectables off the beaten path. Completing levels perfectly while still collecting everything grants you pro medals, which unlock new costumes to deck Joe out in throughout the mad cap action the game dishes out. Don’t let its apparent difficulty fool you though; this isn’t as complicated a game as you think.

New players will have no trouble progressing by just moving through levels with haphazard disregard for collectables due to the game’s ability to downplay the intricacies of itself with the simplicity of the controls, letting anyone jump in and have a good time without being overwhelmed while still allowing returning players to go at it with all they’ve got for the high score list.

If Movie Mode isn’t enough, there’s also Deleted Scenes, which puts the craziest and hardest challenges of the game in one easy-to-find spot for diehards. Grab a few friends and jump in multiplayer for a couple head-to-head races on select tracks, offering pick-up-and-play action at a moment’s notice. As if that weren’t enough, there’s also Movie Maker mode, letting you make action scenes of your own and share them across Xbox Live with others, promising tons of user content down the line.

Joe Danger 2: The Movie’s over-the-top atmosphere of stunts and ridiculousness will keep you hooked from beginning to end. Isn’t it about time you treated yourself to a good movie?

By Justin Redmon
This entry was posted on Tuesday, September 18th, 2012 at 10:46 am and is filed under Justin Redmon, Video Game Reviews. You can follow any responses to this entry through the RSS 2.0 feed. Both comments and pings are currently closed.