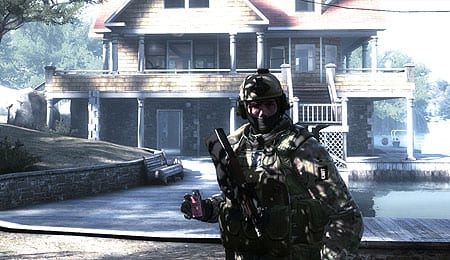 Mods, gotta love ’em, right? From the HD texture upgrade for your ’80s PC titles, to the total conversion mods that completely change the game, Modders go to show that what you have isn’t necessarily what you’re stuck with. Take Half-Life for instance. It’s got shooting, story, platforming, all kinds of good stuff, but somewhere a stern look was cast at the overall package, the entire experience all at once, and slowly it was changed into something completely different.

How different? Try counter-terrorist bomb defusal different. From Half-Life came Counter Strike, perhaps the most popular mod ever created. If you’re one of the five people left who hasn’t played the game, chances are you’ve at least heard of it. Fast-forward multiple releases and we arrive at Counter Strike: Global Offensive, the newest offering from the folks at Valve.

With Counter Strike originally being on PC, the controls were mapped to a full keyboard. Seeing as that kind of setup isn’t exactly possible on an Xbox 360, translating those slick controls are a necessity before anything else. Movement and aiming are par for the course here, and anyone that’s had experience with console shooters should have no problem.

Everything else though, is something of a tossup, as mapping every other necessary function CS offers onto a controller couldn’t have been easy. The game gives the option to map controls however you want, but don’t be surprised if it still takes a while for the console gamer to catch up with the PC one.

Although it’s perhaps the last thing on your mind when it comes to CS, graphics definitely make the difference between getting a headshot and blasting apart a wall. Luckily, Global Offensive scratches that itch with a complete graphical overhaul of the game. Everything from the hands on your gun to paper on the ground has been given a fresh coat of paint to make the experience more enjoyable. Revisiting classic maps like Aztec and Dust2 is like seeing them for the first time all over again, in part due to small tweaks and fixes to their original designs. An updated UI and Radar make CS even more accessible.

Looking pretty is one thing, but the sounds of battle are just as important, as hearing that player slinking up behind you is the difference between getting the bomb defusal and a knife in the back. As with the graphics, CS:GO comes with a refined sound system, making noise more direction based for surround sound or headset users, and a slew of new weapon sounds for junkies of that nature. Everything sounds and looks great — a welcome addition to such a classic game.

Modern first-person shooters have given gamers a lot, changing things up, adding new features, trying to make the experience as complete as possible. Conversely, Counter Strike proves that you don’t need fancy new features to bring people back to the game they love, as the tried-and-true formula remains practically untouched since the first mod release, with minor gameplay tweaks and enhancements making up the bulk of each game’s update.

As for gameplay, this is classic CS. Five-on-five terrorist vs. counter-terrorist matches giving you exactly what you want; bomb plants, ninja defuses and a whole lot of wall bangs. Rounds start out with weapon and gear purchases, but don’t be surprised if money is scarce. Playing objective and getting kills adds money to the bank, letting players get bigger and better weapons as the rounds drag on. Winning the round or surviving lets you keep your gear, saving money. Die, and lose it all. Teamwork and guesswork go hand in hand during matches, with map knowledge, rush routes and down to the wire gunfights often being the deciding factors in matches.

Eight updated classic maps make up half the roster, while another eight new ones round out the stable of offerings. You’ll also blast enemies with a collection of returning weapons, as well as a few new offerings to add to the strategy. Things like incendiary grenades and Molotov cocktails allow you to completely shut off rush routes with walls of fire, while decoy grenades offer distractions and impromptu ambush opportunities on a moment’s notice.

And that’s not even getting into the gameplay modes, with Classic and Casual Competitive giving you the staple CS gameplay, and Arms Race or Demolition offering up a few different choices for players to get into. Arms Race is basically Gun Game, but Demolition is a new spin on Competitive. Offering up smaller maps with one bomb point and no weapon buying, Demo pits teams in lightning-fast skirmishes where kills earn different weapons for the next round. It’s a refreshing change of pace and a nice addition to the overall package.

Counter Strike: Global Offensive is a great game to be sure, but it’s not a perfect package. The controls are the most glaring problem as with so many functions to handle simultaneously it takes a while to get used to all the button locations, most notably weapon switching. The on-screen reticule also becomes a problem, as it obscures a sizable portion of where you’re trying to aim because of its lack of opacity. Re-buying previous equipment between rounds is somewhat awkward as well, as more often than not when I attempted to use this function, weapons I had never used were bought for me; and wasted money in CS is just not good.

Dicey controls and in-game oddities bog down the overall experience, but Counter Strike: Global Offensive still offers up rock solid gameplay for veterans or newcomers looking for an FPS fix.