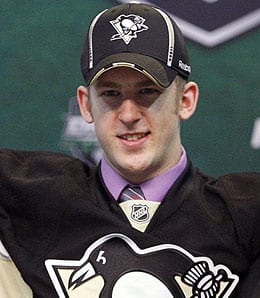 Joe Morrow has a chance to be an All-Star blueliner for the Pens.

With the 2012-13 NHL season very much in doubt – cancelling Wednesday afternoon’s bargaining session? Really? – we thought it would be a good time to look to the future, and discuss some prospects.

We’ll start with the farm system of the Pittsburgh Penguins, a system that, frankly, isn’t very strong, with nearly no depth at centre or in goal and with several of its top forwards dealing with injury issues in the past couple of seasons. Fortunately, the system’s saving grace is a superb collection of defensive prospects that’s the envy of the league.

Here are the top five prospects for the Penguins:

1. Joe Morrow, D: Drafted 23rd overall in 2011 out of the Portland Winter Hawks, Morrow is yet another top defensive prospect out of a league (WHL) known for generating blueline talent. Expected to play in the AHL this year, Morrow isn’t a big d-man (6’0″, 199), but he’s strong for his size and has the tools to become a Brian Campbell-like player. When Morrow was taken in the first round last year, the decision to grab another blueliner raised eyebrows as the club sorely needed a right winger, but this 19-year-old has an extremely high ceiling and as long as he can avoid some of the injuries that dogged him in junior, he has mad upside as an offensive defenceman.

2. Simon Despres, D: When Despres was drafted three years ago, we described him as big with a hint of offensive potential. He managed four points in 18 games in his NHL debut last season, but just turned 21 last month, so the fact that he was able to cut his NHL teeth at such a young age bodes well for his future. Ticketed for the AHL this season, Despres is a two-way d-man who knows how to make a solid first pass, but needs work on his puck-moving decisions.

3. Beau Bennett, RW: Taken 20th overall by the Penguins in 2010, Bennett is a Jason Pominville type who has great playmaking skills. A rare California-born prospect, Bennett played in BCHL Junior A hockey to hone his skills. The 20-year-old was a late bloomer, and he’s filled out nicely since being drafted as a beanpole. The offensive skills are elite, so Bennett could be a difference maker in time, especially in an organization which lacks depth at right wing.

4. Brian Dumoulin, D: Did we mention this organization is blessed with blueline talent? As if the Pens didn’t have enough depth on their defense corps, they added Dumoulin from Carolina in the draft day trade that sent Jordan Staal to the Hurricanes. The 20-year-old has not received the accolades of some other Penguin blueline prospects, but most believe he’ll be a solid NHL player in time.

5. Eric Tangradi, LW: Two seasons ago we pegged Tangradi as a sleeper and while he played 15 games with the Pens that year, he didn’t make much of an impact. Last year, he saw more action (24 games), but failed to bulge the twine. However, Tangradi is just 23 and continues to pile up numbers at the AHL level. There’s a good chance he will earn a larger role with the Pens this season and ultimately becomes a power forward in the mold of former Penguin Ryan Malone.

By RotoRob
This entry was posted on Thursday, August 23rd, 2012 at 12:22 pm and is filed under HOCKEY, Prospects, RotoRob. You can follow any responses to this entry through the RSS 2.0 feed. Responses are currently closed, but you can trackback from your own site.