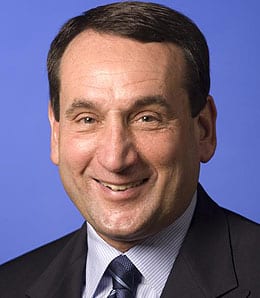 As big as a sports freakazoid that I am, when it comes to the Olympics, I am grossly underwhelmed. It just seems like a lot of political bullshit with plenty of events that I couldn’t give a crap about it. Tennis and basketball are the two notable exceptions in the summer games.

So it was with great interest that I observed the lead up to the 2012 London games as the U.S. Men’s basketball team invariably drew comparisons to the 1992 Dream Team – comparisons fuelled in large part by comments from both Kobe Bryant and LeBron James.

Personally, I believe that’s an apples and oranges discussion, but I am extremely interested to see if this current incarnation can hold a candle to that team.

The Americans are 2-0 after bitch-slapping Tunisia 110-63 on Tuesday.

And no… Tunisia – in its first Olympic basketball tourney — is not a medal favourite.

What was most interesting about this win was that after a less than stellar first half had Team USA up by “only” 13, Coach Mike Krzyzewski flipped his lineup and started the reserves in the second half.

Hey, why not? The starting five (Chris Paul, Kobe, King James, Kevin Durant and Tyson Chandler) were struggling from beyond the arc (0-for-8 in the first half) and somehow managed to trail 11-10 nearly a quarter way through the first half.

The Americans turned it on from there and wound up having six players reach double figures, led by backups Carmelo Anthony and Kevin Love (16 each), Durant (13) and top draft choice Anthony Davis (12). Russell Westbrook added 11, while James Harden pitched in with 10 points.

Davis in particular was a major sparkplug off the bench. This kid – who has yet to don an NBA uniform – is proving he can play with the best of them, putting together an incredibly efficient performance in just 14 minutes. He was perfect from the field (5-for-5) and the line (2-for-2), while chipping in with three boards, a steal and a block. Yup, this dude is going to be a serious force, so you better not overlook him on draft day.

Melo was even more efficient, also enjoying a perfect shooting night (6-for-6 from the field, including canning both his attempts from beyond the arc and from the line) to rack up 16 points in just 12 minutes. He didn’t contribute much else, but man, did Anthony ever have it going on from the field.

Starting the second half alongside Deron Williams, Westbrook, Love and Andre Iguodala, Melo helped spark a 21-3 run that put the game away.

However, the question remains: what happens if the Americans continue to start sluggishly once some real opposition appears? And rest assured… tougher challenges than Tunisia lie ahead.

Coach K wants Paul running the offense, but we can’t help but wonder if D-Will’s overall game is better suited to steer Team USA to gold. Would Krzyzewski even consider a swap? I doubt it, but we’ll see what happens when the competition amps up against Argentina and then into the medal rounds.

The playing time all around has already been quite well dispersed, but could the second unit have bought itself a bigger role with this performance?

After going off for 22 points in 28 minutes in the opening game against France, Durant was much less a force in this one, sinking just 4-of-10 for 13 points. However, KD led the team with 10 boards and also dropped five dimes, once again proving that the league’s leading scorer can affect a game even when he’s not filling it up from the floor.

By RotoRob
This entry was posted on Wednesday, August 1st, 2012 at 1:47 pm and is filed under BASKETBALL, Olympics, RotoRob. You can follow any responses to this entry through the RSS 2.0 feed. Both comments and pings are currently closed.