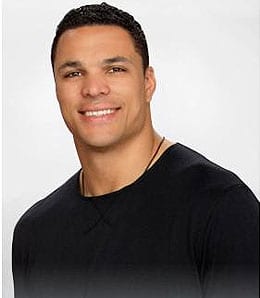 We’ve come a long way from when Tony Gonzalez was the only decent TE option.

The 2012 RotoRob NFL Draft Kit continues today with the release of another cheat sheet. So while you wonder if the Detroit Lions can surpass the Cincinnati Bengals in off field legal issues, let’s take a look at the tight ends for the 2012 Fantasy football season.

Do you remember the days when you were limited at the tight end position? When Tony Gonzalez was pretty much your only option? Those days are long gone as the tight end position has evolved into one that can have serious Fantasy impact. As teams are using their tight end more and more over the past decade or so, we’re talking 20+ points week in and week out by some of this big ol’ hog mollies! Oh, and don’t forget Mr. Gonzalez — he’s still relevant despite being well into his 30s! Here are our picks for the top 31 options at tight end for 2012.

What more is there to say about Gronk? The dude broke a record for TEs last year hauling in 17 TD passes from Tom Brady. His ankle is a slight injury concern, but we still think you can get ultimate in pack by picking this guy in the fourth or fifth round.

If you miss out on Gronk, don’t feel bad about landing former basketball star Graham, who wasn’t far behind Gronkowski last year. This guy has another stud QB throwing to him in Drew Brees and is as near a lock as possible to haul in over 1,000 yards receiving and close to double digit TDs.

Gates, another former stud on the hardwood, is always drafted a little too high. If healthy, he will put up big numbers with QB Philip Rivers throwing dimes his way. But Gates seems to always miss two or more games a season. Buyer beware.

This tier, to us, will show your real drafting prowess. While the four guys in Tier 1 may put up slightly better numbers, these guys you can probably hold off an extra round or two before drafting while still getting comparable results.

Vernon Davis had a solid year with the 49ers based on QB Alex Smith’s rise from the dead. If Smith can prove he is a legit QB, we think Davis has a realistic chance of hauling in 1,000 yards with seven TDs.

Witten was the top Fantasy tight end in the NFC East last year, and will likely repeat that feat in 2012, although Fred Davis and Celek might have something to say about that.

Then we have our other New England TE in Hernandez. How many backup TEs have 910 yards and seven TDs in one season? Yup, we were drawing a blank there too. Hernandez will benefit from extra coverage on Gronk, so feel very confident if you are able to snag this stud.

As we mentioned above, Gonzalez doesn’t get old, he gets better. The savvy vet, now 36, put up great numbers again last year with 875 yards receiving and seven TDs to boot. While he might slide down draft boards a bit, in leagues with two TEs owners should in no way feel bad about having Gonzalez start as he can still make an impact.

The “O” dog Daniels is a stud. He’s in the mold of a Miller or Clark in that he is a sure handed TE who still plays physical football. Daniels has a tendency to get hurt, but did play in 15 games last season. Another full season, with a healthy Matt Schaub throughout, might see him approach 1,000 yards and five TDs. That’s nothing to be ashamed of.

Fred Davis might be a little bit of a reach, but not because of his talent. This would be because of his rookie QB in Robert Griffin III. Davis is another guy with crazy talent, and if RG3 puts up a Cam Newton-esque season, you might be able to squeeze some solid numbers from Davis.

You know who really grinds our gears? Dustin Keller. Or maybe it’s Mark Sanchez for not getting the ball to Keller. Hell, maybe we should get pissed at Rex Ryan for that. Either way, if the ball was thrown more to Keller he could be a top Fantasy target. We’re talking Tier 1. He still put up pretty good numbers last year with 815 yards and five TDs, but this guy could seriously be a 1,000-yard, 10-TD tight end. Either way, he will be a good value pick for the mid rounds.

Celek put almost identical numbers to Keller and we wouldn’t be surprised if his 2012 numbers mirror those of 2011. Celek is a solid TE, but plays on a team with a ton of weapons on offense so his opportunities are more limited than others on this list. In a two-TE league though, feel happy with getting him as your second TE.

Tamme could be useful given his familiarity with the Broncos’ new quarterback.

Cook, meanwhile, is a bit of a sleeper.

Speaking of sleepers, how about former Cowboy Martellus Bennett? He’s going to get a chance to turn his potential into production now that he’s with the Giants.

How weird will it be seeing Clark in a Tampa Bay uniform? Actually, not that weird because you will probably see few, if any, highlights from the former Iowa star. We’re not sold on Josh Freeman as a QB, therefore we’re not sold on Clark revitalizing his career outside of Indianapolis with a young QB. Personally, we would steer clear.

Now that we have that out of the way, let’s talk about who we do like in this tier. Dickson was a stud at the University of Oregon and he looks to be on the cusp of breaking out for the Ravens. He had a solid, but unheralded 2011 season with 528 yards and five TDs, but I can honestly see him closer to 900 yards and eight TDs in today’s pass happy league. This is a late value pick at its best right here.

Part of me detests Olsen for spelling his last name wrong, the other part of me appreciates him for playing the 2010 season with Jay “I’mgunnacryanysecond” Cutler as his QB. That’s gotta be tough for anyone. Anyhow, Olsen could have a great season behind the emerging Newton. This is another late value pick (see, we told you the TE position is deep now!). Olsen had good numbers last year, his first with Newton, and should build on that this year.

Miller is still enjoying success at the age of 29, but for some reason this guy seems closer to 39 and his Fantasy performance is slowing. He had a down campaign in 2011, and we don’t see too much upside in 2012.

Fleener, if nothing else, should be a major safety valve for Andrew Luck in Indy, especially given their familiarity with one another from college.

Winslow is a soldier! He’s also about to revitalize his career in Seattle. Actually, last season wasn’t even terrible for Winslow. The Seahawks’ offense seems like a prime location for a good TE in the red zone, so hopefully Pete Carroll will draw up plays to toss the pigskin to Winslow in the end zone, and if so you can most likely scrape him off the waiver wires for a solid Fantasy impact.

Rudolph is a fine pass catcher and don’t underestimate Minnesota’s ability to improve considerably this season.

Carlson, who is sort of in the same boat, is a former Seahawk worth tracking. He had a disappointing rookie contract in Seattle and starts fresh in his home state of Minnesota. But we wouldn’t trust those QBs throwing to him. For one more year, please steer clear.

Why are you looking for a TE this late, fool? Is it Week Nine already? Are your TEs ravaged by injuries, on a Bye week, or suspended? Fine. Give Allen a shot. Why not? A third rounder out of Clemson, maybe he will have some rookie chemistry with Luck and you can get lucky in a pinch.

Housler is a breakout candidate in Arizona, so he could be worth a flier.

Moeaki had a fine rookie season, but missed last year with an ACL injury. He’s expected to be healthy this year, so could surprise.

By Daniel Olson
This entry was posted on Thursday, June 28th, 2012 at 2:14 pm and is filed under 2012 RotoRob NFL Draft Kit, Cheat sheets, Daniel Olson, FOOTBALL. You can follow any responses to this entry through the RSS 2.0 feed. Both comments and pings are currently closed.