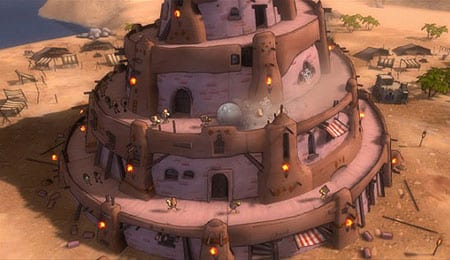 Go Biblical on those pesky humans… if you can actually see them.

Religion and tower defense — it’s a combination that’s not quite as enticing as peanut butter and chocolate, but Babel Rising was popular enough in the mobile market to make it over to consoles. If you’ve ever wondered what God (the vengeful one of the Old Testament, not the kinder, gentler one of the New Testament) would do if he ruled his kingdom like a tower defense game, Babel Rising has got you covered. Once you strip away the goofy premise, though, Babel Rising suffers from a repetitive mechanic that bogs down the game’s overall potential.

Note that the Xbox 360 version supports Kinect. This review focuses on the PS3 version with Move support.

There’s nothing inherently wrong with Babel Rising’s controls, but they wind up feeling a little loose after a few rounds. Tower defense generally doesn’t need the tightest controls, but depending on your current camera view, your opponents can be pretty small on the screen — and that means smoting them with rocks or fire winds up being a bit difficult.

The basic controls are the same across controller options and systems — one button is a primary attack, one button is a secondary attack (held down), and a super attack is available. Babel Rising’s attacks are based on the elements (you are God, after all), and a button switches between the elements in your arsenal.

For the Playstation Move, the problem really comes with the camera control. Holding the trigger button allows for camera movement — left/right to rotate and up/down to zoom in. However, this clunky scheme winds up being floaty at best, making it difficult to just focus on where you want to go. It would have made more sense to integrate the Move’s Navigation controller for camera work.

If you use the Move, your targeting reticle is Move based. That means you’ll need a steady arm for accurate attacks. For some people, that might make it more fun; others might find it irritating — pick your poison.

Originally developed for iOS and Android devices, Babel Rising took the step forward to HDTVs with its PS3/Xbox 360 release. However, Mando Productions didn’t do much to make the graphics any more robust despite going from a 2D plane to a 3D perspective. The work-in-progress Tower looks like, well, a wood-and-rock construction site. It’s appropriate but not notable in any way.

One of the issues is that your God perspective is from pretty high up in the heavens. That means that those pesky humans look tiny. They could have been sheep or humans or lemmings for all I could tell. This also makes it a little difficult to aim, as the enemies are so small that sometimes you’re not quite sure if you get them (fortunately, fire attacks cover a wide range — burning people is fun).

The humans have squeaky voices; if you’ve ever played the Worms series, it’s kind of like that. This adds to the cartoony feel of the title but that’s about it. As for the music, I actually turned it off after a few rounds — a good chunk of it is literally nothing more than a drum chant. In a God vs. Man battle, you think there’d be something a little more appropriately epic, even in cartoony form.

There’s not a lot of depth to Babel Rising. It’s an inverted tower defense game — rather than defending your tower from being destroyed, you’re trying to stop the humans from building it. You’ve got the elements at your disposal, and your primary and secondary attacks have a regenerating meter. Most of the frantic pace comes when you’ve used up one element and you need to switch to another to take out the hoard.

The more you kill with a specific element, the more your super weapon gets charged. This kill-’em-all attack comes in the form of angry diety vengeance and buys you some time for your other attacks to regenerate.

Part of the problem with Babel Rising is that it’s focused around the Tower of Babel. It’s not like you’re working with an ever expanding fortress with turrets and walls and specialized defenses. The fun is in using lightning and fire to kill the humans before time runs out, but despite different level variations, it gets old fairly quickly. I could see why this was a successful time waster for mobile devices, but as a sit-down game, there’s really not too much beneath the surface.

Babel Rising supports multiplayer, but all of the modes are essentially survival/time challenges against opponents. There are no unique twists given with multiplayer.

What works on mobile devices doesn’t necessarily work on consoles. Babel Rising is a cute idea with a fun core mechanic, but its lack of variety won’t keep you captivated for long. Unless you have some pent-up rage around the Old Testament, you’re better off looking for other tower defense options (Dungeon Defenders is still awesome).

By Mike Chen
This entry was posted on Wednesday, June 27th, 2012 at 11:26 am and is filed under Mike Chen, Video Game Reviews. You can follow any responses to this entry through the RSS 2.0 feed. Responses are currently closed, but you can trackback from your own site.