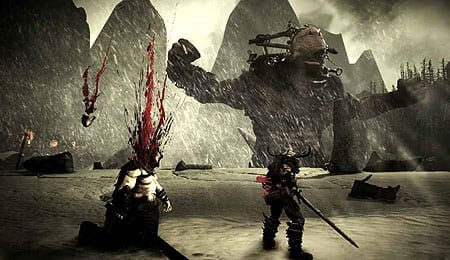 Heads up! The camera in Bloodforge is never this steady.

If ever a video game review deserved to be written in all caps, it’s Bloodforge. The second installment of Microsoft’s Arcade NEXT promotion from developer Climax Studios is overflowing with unbridled rage as guttural yells and severed limbs punctuate the gory battles. The question is will all that testosterone have you bellowing with delight, or shrieking in frustration?

Hack ‘n slash aficionados should have no trouble jumping right in with a familiar face button setup: light and heavy attacks, ranged fire and jump. As Crom, you’ll have access to three melee weapons (sword, hammer and claws — selectable through the d-pad), all of which have their own combos, as well as a crossbow. Combat unabashedly slants toward God of War with lengthy attack chains and split-second evasions via the left trigger (there is no blocking) and, outside of an occasional stutter when trying to execute multiple rolls in succession, it performs admirably.

Where the layout runs into trouble is with consumables and magic. Holding down the left bumper brings up your collection of usable runes (read: potions) while the right accesses your available spells. You can select them from there or map them so that a tap of the bumper unleashes the mapped skill. Sounds simple, right?

Unfortunately, Bloodforge requires you to press both bumpers simultaneously to activate “Rage Mode,” and then to hit them again to execute rage kills. Instead what happens is you often end up wasting a health rune or draining your mana because the game only recognizes half the input. It got so bad that I mapped a rune I didn’t care about for when I inadvertently used it.

It’s also important to note that battles require near constant movement of the camera, which is done with the right analog stick. This may be a make or break moment for gamers as the perpetual need to attack, roll away and readjust the camera won’t be embraced by everyone. In fact, even those that can deal with the unending maintenance must still deal with the all-too-frequent instances of the camera getting “stuck” on an object in the environment and throwing your view into disarray.

While the gameplay was influenced by God of War, the graphics seem to have taken their cue from the shadow world of Legend of Zelda: Twilight Princess. Of course, Bloodforge is decidedly more adult fare with nasty executions and the red splatters of blood standing out against an otherwise almost colourless world. Smoky darkness obscures the corners of the screen, which creates an oppressive mood where the world itself seems to be closing in around you. It’s a stylistic approach that is sure to create divergent opinions amongst gamers.

There’s surrealism in most of the environments you traverse, including sections that assemble in front of your feet a la Bastion, but not a ton of variety. That holds true for enemies, too, with a fairly limited selection of foes to dispel. The aforementioned camera also has issues even in down times as running creates a bobbing effect that takes some getting used to.

Remember in Anchorman when Brick Tamland shouts, “LOUD NOISES!”? Well, that appears to have been the two-word direction given to the audio team as nearly everyone yells. Crom speaks with a thunderous growl reminiscent of Kratos and is just as cheerful with thinly-veiled threats to the woman that is ostensibly helping him get his revenge. Dialogue and voice acting are cliché (and earsplitting) but otherwise fine, whereas the soundtrack is repetitive.

You are Crom, a powerful warrior that has forsaken a life of killing to start a family. Unfortunately, that life all comes crashing down when your village is raided and you are tricked into killing your own wife at the conclusion of the raid. Now the only thing driving you is vengeance — vengeance on the God (or Gods) that caused the deception. If all that sounds familiar it’s because that is part of Kratos’ origin story in God of War. Original, it isn’t?

Donning a helmet evocative of Kael from Willow, Crom is guided by a mysterious woman that can transform into a raven (wait, didn’t the good witch in Willow turn into a bird, too?). She has her own, veiled reasons for helping, but she would see you fulfill your prophecy by killing the offending God(s). It’s a setup we’ve seen dozens of times and one that does little other than set the stage for arguments at high volumes between the dueling parties.

As noted, combat is ripped straight from the God of War playbook. You move through the linear levels until you reach a point where enemies emerge from the ground and escape routes are cut off, which effectively turns it into arena combat (each battle is individually ranked based on your performance). It’s a bit overwhelming early on with enemies attacking from all directions, but as you get a feel for how to adjust the camera on the fly and what tactics to use, it becomes quite manageable.

That comfort level serves as a double-edged sword. On the plus side, it lessens the issues created by the game’s camera woes. Conversely, it underscores just how predictable your enemies are with their attacks. Each of the enemy types has a pretty limited number of moves that they stick with, which makes them relatively easy to dispatch. In fact, by the third level I could escape most encounters unscathed. The lone exception is a foe with a grab attack, but the reason it would get me is because it’s so difficult to see the cue that the move is about to happen.

It’s worth expounding on the “difficult to see” phenomenon because that’s the source of most of the game’s challenge. Enemies and environments tend to both be cut from the same graphically-filtered cloth that leads to them melding together. That, plus the at-times disorienting camera, lead to far more damage than clever or difficult foes.

Stringing together attacks without being hit builds up your combo meter, and varying the moves you use helps you maximize the amount of blood you collect (think red orbs from God of War). That blood can then be spent at alters to unlock and upgrade your spells. Each of the game’s three weapons also has multiple upgrades to find as you progress, granting you access to new combos, and there are runes to increase your maximum health and mana. Unfortunately, while the game continues to introduce improved weapons and additional attack combinations, the frenzied nature of battles all but ensures you’ll trend toward button mashing over utilizing your combos.

With no additional difficulty settings, no multiplayer support and a 4-to-5 hour run time for the campaign, Bloodforge doesn’t appear built for the long haul. Leaderboard support (featuring the slowest loading leaderboards I’ve ever seen) is available, and is implemented in a unique way to match up against any friends that have the game. You can also engage in custom wave-based challenges, which can be sent to your buddies, but it’s just more of the same from the campaign.

It may sound like I’m down on Bloodforge, but there’s a visceral satisfaction in dismembering beefy foes that isn’t lost on an unabashed hack ‘n slash fan like me. And while you have undoubtedly seen many elements in this game done better elsewhere it should make a solid buy for fans of the genre.

By Herija Green
This entry was posted on Tuesday, April 24th, 2012 at 1:00 am and is filed under Herija Green, Video Game Reviews. You can follow any responses to this entry through the RSS 2.0 feed. Both comments and pings are currently closed.