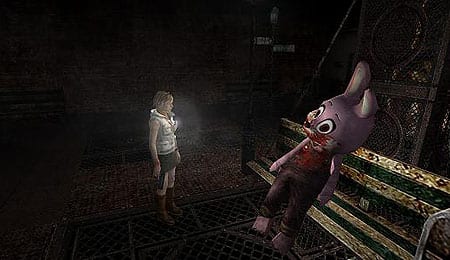 The Survival Horror genre has splintered into sub-categories since its inception with Resident Evil back in the late 1990s. Silent Hill worked almost like the yin to Resident Evil’s yang; rather than being a touch agent, you were just someone looking for a lost loved one. Silent Hill’s bodycount is generally pretty minimal compared to Resident Evil, and Silent Hill’s puzzles and mood are more based in the “messing with your head” vein as opposed to a Rob Zombie horror movie.

Konami has reached back to two of Silent Hill’s best releases, spit-shining them for an HD release. Silent Hill 2 stars James Sunderland, just another dude who drives to the sleepy town of Silent Hill in a crappy car to investigate a letter from his dead wife. Silent Hill 3 is directly tied into the story of the series’ first game and features a young woman named Heather.

Note: From a technical perspective, Silent Hill 2 and 3 are essentially the same game — same engine, same controls, similar graphics levels. So for the purposes of reviewing technical aspects of both, I’m going to refer to the package simply as Silent Hill.

Time has not been kind to the PS2-era Silent Hill games. Both games were released at a time when tank-style controls (rotate and move as opposed to, you know, just walking somewhere) were already obsolete. So when you first take control in Silent Hill and hit left or right on your analog stick, you might be confused for a second as your character starts to rotate rather than step. In this case, the trigger buttons shuffle you left and right while analog up/down move you forward and backward. If it sounds clunky, it’s because it is.

Fortunately, you’re not stuck with this setup. A simple menu change from 3D to 2D controls quickly fixes it, and movement is based on camera perspective rather than the orientation of your character. However, this does cause some problems as the camera can get tight in cramped quarters, which leads to constant camera angle flips that could literally leave you running in circles. If you’re trying to run from weird mutant things in a hazy fog, this tends to be problematic.

Survival, of course, is half of Survival Horror, and you’ll need weapons to fight your way into and out of Silent Hill (the town and the game). In most cases, holding the R1/upper trigger button gets your character into ready mode, which is somewhat locked on to the nearest enemy. The attack button on the face pad swings your melee weapon, and swing is the operative word — there’s a canned animation that winds up and swings. It’s pretty slow and winds up being fairly inaccurate, which means it’s pretty damn frustrating. If you do manage to knock down your opponent, pressing the attack button without aiming allows you to kick them on the ground until they’re dead.

For me, this was so clunky and frustrating that I actually set the combat difficulty level to Easy. This allowed me to enjoy the story without really having to worry about fighting the lumbering, um, things lurking around. Silent Hill 3 refines this just a tad but it’s still difficult to work with.

In many cases, it’s easier to run from an enemy than engage it, which means you’ll find yourself holding down the run button on the face pad quite often. This is much easier with the 2D control scheme.

A large part of Silent Hill involves puzzles, and that means an interaction button. This all-purpose button simplifies things, though to use something from your inventory with the environment, you’ll have to go through the traditional menu screen. Consequently, Silent Hill often feels like the halfway point between old-school adventure games and Resident Evil.

Keeping in the context of when these games were made, Silent Hill looks and sounds incredible. The environment is as much of a character as any being (human or otherwise), and locations are all treated with the appropriate amount of decay. When the town of Silent Hill is overrun by its signature fog, you literally have a barrier of fog preventing you from seeing more than a few feet in front. This keeps things surprising and tense, even when the technical limitations of the graphics are exposed by the HD upgrade.

The HD upgrade hasn’t affected the audio atmosphere in any way. This is fine, though; Silent Hill has always excelled at balancing mood music, rhythmic sound effects (footsteps, etc.), and stark silence. When you encounter your first mystery footsteps through the silence, the tension escalates despite absolutely nothing else happening. That’s the beauty of Silent Hill and it works extremely well. The series’ trademark radio static is still as disturbing as ever, and you’ll wind up reacting to static completely different for days on end after playing these games.

At its very best, Silent Hill is all about psyching yourself out from the series’ unique combination of atmosphere and twisted narrative. Gameplay involves a lot of exploring, often without any clear direction on where to go or what to do — you have a rough idea of what you want to do, but you can’t help but stumble upon disturbing incidents or curious characters. The games unravel layer upon layer — in some cases, the unraveling layers break apart reality and the other world where the true Silent Hill exists. As you move further and further throughout the game, you’ll often have to solve puzzles in order to advance.

Puzzles range from interpreting clues for unlocking doors to using objects in the environment. For example, you may see a mysterious riddle scrawled on a wall, and certain words in the riddle relate directly to a mystery grandfather clock in the corner. In another situation, a ladder may be out of reach, but you can find a makeshift hook to pull it down from the ceiling.

These puzzles are pretty standard fare for any adventure game veterans. Those used to first-person shooters might get frustrated with them, but both games include a difficulty level for riddles — and of course, there’s always online walkthroughs should you need it. Exploration is key to puzzle solving, though there are certainly some limiting design factors here, as you’ll become very familiar with the sound of a locked door. It makes sense that an abandoned town or a closed mall would have a lot of locked doors, but it sure sometimes feels empty — not the fun kind that contributes to the atmosphere, but the kind that seems like lazy design. If a third of the closed doors in the game were replaced with a piece of art or some object that came with a unique description, that would add much more to the experience.

Silent Hill is claustrophobic — more so indoors, but definitely in any situation. When nasty beasts start attacking you, you’ll find this cramped space as a strong design mechanism for amping up the tension. The problem, though, comes when the clunky controls make it difficult to escape this. Similarly, the occasional boss fight may not be terribly difficult if the action/aiming mechanisms totally cooperated with you.

The good news is that the game’s design focuses more on exploration and puzzle-solving rather than combat. This allows the narrative to unfold organically rather than feeling like cut scenes inserted in between action set pieces. And you’ll want to stick with the story as it starts off simple enough before gradually descending into hellish concepts and overtones — this is a good thing, and one of the stunning parts that make Silent Hill so memorable.

It’s very difficult to overlook the obsolete control scheme for the Silent Hill HD Collection. This is a video game, after all, and when controls are sluggish or messy, it severely hampers the experience. However, if you can overlook (or cope) with the controls, you’ll find a gripping and disturbing narrative, along with some of the best atmospheric work seen in gaming history. Gamers looking for a visceral thrill might get too frustrated but those willing to work with the deliberate pacing of Silent Hill 2 and Silent Hill 3 will be greatly rewarded.

By Mike Chen
This entry was posted on Sunday, April 1st, 2012 at 2:25 pm and is filed under Mike Chen, Video Game Reviews. You can follow any responses to this entry through the RSS 2.0 feed. Both comments and pings are currently closed.