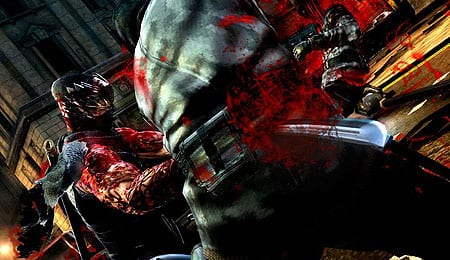 Please, no! I haven’t paid my student loans yet… BLARGH!

In 2004, Tecmo pulled its 8-bit legendary hero and Dead or Alive favourite, Ryu Hayabusa, and gave him his own action-adventure title. Ninja Gaiden (along with Capcom’s Devil May Cry) established a new standard in action-adventure games that practically all successful titles in the genre have borrowed from since. After two remixes and a sequel with its own redux, the Master Ninja is back for new blood. And this time, Ninja Gaiden 3 is free from exclusivity and packed with some goodies for the both the Xbox 360 and PlayStation 3.

So what’s new in Hayabusa’s grab bag of pain? Word on the street is that he’s still a ninja with a sweet list of moves to slice and dice enemies with. Most of the techniques and controls from the previous two installments are present here with a fair share of tweaking. You still have a light and heavy attack along with the jump and shuriken on the face buttons. Blocking and dodging are done with the left trigger, and this time, the bow can be pulled out by holding the left bumper while using the right trigger to shoot your arrows. And as before, when the move list unlocks as the game progresses so does the game’s potential to kick some serious ass.

The bad guys pile on very quickly, calling for aggressive maneuvers and sharp tactics. Luckily, Ryu is as quick and nimble as ever; attack combos are pulled off smoothly, the bow snaps an auto-lock to the most convenient enemy, and the block/dodge is integrated into defensive combat better than ever. After dropping enough enemies at a good pace, you can unleash an Ultimate Technique. By holding and releasing the hard attack, Ryu will go on an instant kill frenzy to lighten the enemy load. Also chargeable is the “Ninpo,” or ninja magic. Pressing hard attack and shuriken together unleashes a flaming dragon that consumes your enemies and restores your life as well.

To keep with the times, Ninja Gaiden 3 infuses quick-time events and instant kills into its signature ninja hack ‘n slash controls. For example, soften up a set of enemies then watch as the camera quick snaps to brutal slow-mo close-ups of Ryu’s blade piercing into blood-spraying flesh with quick taps of the prompted attack button. Another example is harrowing escapes that throw directional and dodge commands to slide underneath closing doors. The responsiveness on these events is good; in fact, they may actually be too forgiving. The window for success is longer than other games, making it not only easy but sometimes distracting and pace-breaking. Still, the meat of the controls is in the sword play, and Ryu’s latest outing is as satisfying as ever.

You can usually count on Team Ninja to bring strong visuals to the table. And while there isn’t anything that’s pushing the limits of what the current gen systems can do here, this is a decent looking title. Hayabusa and the supporting cast of characters are top notch models and the enemies (even those with peculiar design) are fitted with good detailing. The blood effects are down right nasty giving plenty of carnage for gore hounds to lap up. An intense score and competent voice acting? Check that off the list as well.

Problem areas that prevent Ninja Gaiden 3 from impressing are inconsistent detailing in the environments, a few moments of spotty camera clipping and frame rate drops during heavily occupied battles. Also, a majority of human enemies are awfully chatty during the fights and can get annoying very fast. Picture eight dudes with the same voice yelling something like, “We gotta get that ninja!” or “Please don’t kill me!” over and over again. Hmm. You don’t say? The only sound they should be making is screaming in agony, not stating the obvious.

Ryu Hayabusa has been through a lot of crap over the years, and once again everyone is counting on him to save the world. Here, a secret organization known as the Lords of Alchemy (I think they opened up for Slayer back in the day) forces his Dragon Sword to fuse with his body, creating a curse that disfigures his arm. Burdened by the blood and souls of its fallen foes, Ryu is recruited by the government to fight through his pain and prevent a creation-by-destruction goddess with a giant cherub head from destroying Japan — nay, the entire planet. As head-slappingly ridiculous as that sounds, I found this to be a story improvement over Ninja Gaiden 2, which featured European werewolves, a possessed Statue of Liberty and some other fruity nonsense.

What follows is a 6-to-8 hour campaign full of daredevil escapes, gigantic bosses and lot of goddamn bloody mayhem. Armed soldiers with optic camouflage and disgusting beasts alike all line up for quick death. There isn’t a Doberman pincher or brainwashed T-Rex that Ryu isn’t willing to carve into oblivion with his slick controls, stylized kills and new streamlined gameplay. Gone are absorbing chi, buying health and equipment items and searching for scarabs. The intent is to have non-stop action with life restoration acquired by skillfully used Ultimate Techniques and Ninja Magic. With all the fun I was having, I almost didn’t notice the fact that something was missing — weapon variety and hair-pulling challenge.

The Ninja Gaiden games have always had a reputation for being extremely difficult. This was especially true in Ninja Gaiden 2, which was criticized by some for being straight-up cheap rather than actually challenging. It appears that the goal in this game is to save the beating for those looking for it in the harder difficulty settings and keep the normal setting an actual obtainable goal. It still has a bite to it compared to most action games, but those hardcore Master Ninjas out there should go ahead and punch it up to hard on the first playthrough.

And what about all those sweet weapons? Apparently they will be available in upcoming DLC for free. However, I’m not sure why they were excluded from the main story. After all, the plot had the perfect reason to use alternative weapons seeing as how Ryu’s Dragon Sword is removed from the equation in the second chapter. I give credit to this installment’s main sword play for being able to carry the weight of the entire game, but the flexibility to swap between weapons was very much missed.

Beyond the story mode is the Shadows of the World online component where you can level up and customize a ninja warrior to tackle on its modes. First up is the Clan Battle mode, a four-on-four team Deathmatch or traditional Deathmatch where players can pit their ninja skills against each other. There are some balance issues where higher leveled warriors have the bigger advantage (i.e., better moves and more projectiles) and it’s a little on the sloppy side. Still, it’s a damn fun extra. To stealth walk and stab enemies after emerging from an optic camouflage ruse — a maneuver exclusive to this mode — is a treat.

Finally, a Ninja Gaiden staple returns — Ninja Trials feature relentless waves of enemies sometimes followed by a boss. Like in Ninja Gaiden Sigma 2, you can take these on with a partner via online co-op. All kills performed in these two modes level up your generic ninja that you can suit up with earned aesthetics like armour and kanji symbols. The aforementioned DLC reportedly will contain new stages for the Clan Battles as well as usage of the various weapons.

Ridiculous plot lines and unnecessary usage of jiggly boobies aside, the Ninja Gaiden games deliver the action goods. This latest entry isn’t the masterpiece amalgamation one would expect after so many iterations, but Ninja Gaiden 3 is a solid title that’s trying its hardest to please everybody. It has a simplistic gameplay flow and online components for the uninitiated, and the vicious brutality and tight controls that made people, like me, diehard fans in the first place.

By Jess Castro
This entry was posted on Monday, April 2nd, 2012 at 7:53 am and is filed under Jess Castro, Video Game Reviews. You can follow any responses to this entry through the RSS 2.0 feed. Both comments and pings are currently closed.