Video Game Review: The Ico & Shadow of the Colossus Collection 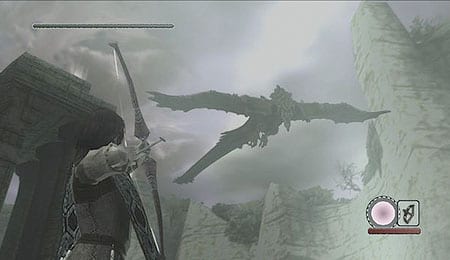 High-definition treatments of last-gen franchises have been all the rage over the past year-plus with series like Metal Gear Solid, Tomb Raider, Splinter Cell and Prince of Persia all getting polished up for modern televisions. Not to be left out, Sony has re-mastered a pair of PS2 classics developed by Team Ico with Ico and Shadow of the Colossus. Originally released together on a retail disc, both games are now available for individual download on the PlayStation Network. And while not all high-def remakes are created equal, Team Ico’s efforts hold up exceptionally well.

If there’s one area where both games feel outdated it’s the controls. It’s more noticeable in Ico, the older of the two, where the camera can sort of be manipulated to look around but still swings into more than its share of odd angles. Jumping, climbing and lifting objects are all solid, which is important given how much time you’ll be spending doing those activities. Combat isn’t much fun, though that’s more about you playing as a young boy than a control issue.

As for Shadow of the Colossus, it shows a more refined scheme that allows for contemporary amenities like full movement of the camera and toggling between weapons with the d-pad. All essential functions are confined to a single button press — square for combat, triangle for jump, and so on — and it makes for streamlined gameplay. Guiding your horse around feels clunky compared to a game like Red Dead Redemption, but it’s rare that those limitations hinder the experience.

It’s a testament to the art design of both games that they hold up so well (more than a decade later in the case of Ico). Even now, the solitude and scale presented is striking as you explore quiet realms where confrontation is the exception rather than the rule. Enemy design in Shadow of the Colossus remains extraordinary, so much so that I still feel that same twinge of guilt when slaying the giants that I did when I first played game back in 2005.

Although the PlayStation 2 roots are plain to see, the conversion to high definition was clearly handled with care. Combine that with the aforementioned artistic quality and you’ve got games that still feel like they belong. There are some funky looking animations with the characters — like the way Ico’s arm contorts when guiding Yorda — but nothing that’ll cause more than an occasional raised eyebrow.

Musically, both Ico and Shadow of the Colossus take a “less is more” approach. They allow the ambient sound (or lack thereof) to build that feeling of isolation with huge sections of the game accompanied by near silence. And when the music does pick up, it does so with purpose and delivers great emotional impact. It’s one of the reasons these games are mentioned in hushed tones of reverence whenever the “are video games art?” discussion breaks out.

In Ico you take control of a boy with a pair of horns growing out of his head — because of this he has been cast out of his village and is to be locked away in a massive crypt. As fortune would have it, a violent tremor allows Ico to escape. Now free, Ico starts to wander the castle in search of an exit when he stumbles upon Yorda, a young girl being kept in a cage suspended high above the ground. Ico chooses to liberate her, and the two of them strike out to find a way to exit the castle.

Thus begins the meat and potatoes of Ico, which is primarily a platformer with some combat sprinkled in here and there. The hook is that you must help Yorda almost every step of the way, whether that means holding her hand or calling for her to join you. Indeed, Ico is essentially one lengthy escort mission and, as you’d expect for an 11-year-old game, the A.I. isn’t exactly cutting edge. Yorda will run in circles instead of climbing objects or refuse to make a jump a half-dozen times before inexplicably changing her mind on the seventh request.

As frustrating as that can be, the level design and cleverness of the puzzles laid out in front of you are so good that it’s worth dealing with every one of Yorda’s eccentricities. Even the game’s annoying combat sequences, which generally consist of shadowy creatures jumping back and evading your pitiful swings to the point that fighting even a couple at once feels like it may drag on for 10 minutes, can’t come close to derailing everything the game is doing right.

There is just such a unique feeling when playing Ico from start to finish that it’s hard not to buy into the world. It’s the story, the organic locations, the creepy shadow foes, the wonderful audio, and more that make this a title that shouldn’t be missed.

Although released four years later, Shadow of the Colossus is considered to be a prequel of sorts to Ico, though the connections aren’t all that significant. Here you control a young man named Wander, who, along with his trusty horse Agro, has ventured to a bizarre land with the intention of resurrecting a woman he loves. To do this he needs to defeat 16 colossi scattered throughout the realm using the ancient sword he carries.

Each colossus must be tracked down by raising your sword in the sunlight; doing so will create a concentrated beam of light that acts as a compass to guide you in the right direction. Much of your time will be spent on horseback, though as you progress you’ll find that there are many areas that Agro cannot reach. Given the vastness of the realm it can be very liberating just to ride around and explore the world — once again there’s something captivating about the solitude.

Once you find the various colossi, things really get interesting. Whereas most games force you to fight through legions of minions for a showdown with the boss, Shadow of the Colossus’ combat consists of nothing but epic boss fights. Each creature is massive, requiring you to strike at weak points in an effort to steadily scale these behemoths and eventually, through near Herculean efforts, bring them crashing down. As I already mentioned, toppling these colossi is a bittersweet affair. As silly as it may sound, Team Ico created a certain pride and dignity within them that still resonates because of the perceived desolate nature of their existence. They’re not evil, they just “are.”

Much like with Ico, Shadow of the Colossus stumbles here and there with camera issues and shaky controls, but again those things never threaten to cheapen the world that’s been created.

Not to take anything away from bona fide thrill-a-minute titles like Uncharted 3, there’s something refreshing about the quiet calm found in both of Team Ico’s games. Playing through Ico and Shadow of the Colossus remains a treat, and if you’ve never found the time you’re truly missing out.

By Herija Green
This entry was posted on Thursday, March 1st, 2012 at 11:55 am and is filed under Herija Green, Video Game Reviews. You can follow any responses to this entry through the RSS 2.0 feed. You can leave a response, or trackback from your own site.