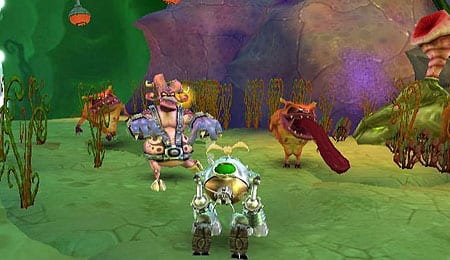 There are many who fear invasion from a race of outer space beings that plot to enslave mankind. Little did we know that humanity’s true threat does not hail from the skies… but from beneath the very ground we walk on! Hey, that sounds just like Gears of War! But, nope, this is The Kore Gang, a new Wii platformer from the good folks at Atari! Easy on the blood and gore, but heavy on the farts and brain torture gags, does this weird little title have what it takes to drag you away from a particular green-capped elf that recently made his triumphant return to the Wii?

Riding in what is called the “Kore Suit” being driven by three unlikely heroes, Kore Gang’s controls are similar to most Wii 3D platformers. Movement is controlled with the nunchuk stick while jump and action are mapped to the “A” and “B” buttons on the Wiimote. Pressing “C” will switch between the three operators, each equipped with their own special moves performed by Wiimote and nunchuk motions. There are also standard cursor pointing controls used for environment interactions, grapple hooking and camera movement.

Platforming titles depend on their jumping mechanics to make them good, and here the jumping height falls a bit short, making for some disappointing stage navigation and sometimes cheap deaths. Wiimote utilization is decent and mostly responsive, featuring moves such as arching up to aim bomb throws or eavesdropping by listening to the built-in speaker.  It’s not without hiccups, though, and a couple of functions like the loose and finicky lock-picking seem to steer away the fun. And oddly, the camera doesn’t simply follow your cursor as you play. The need to hold “Z” while pointing to move the camera seems redundant and unmotivated. Overall, the controls could use some refining in just about every department — even a little tweaking could have bumped them from average to good, or maybe even great.

The Kore Gang doesn’t necessarily impress in the graphics department, but I’m sure it’ll find some appeal with young ones due to its Nicktoons-inspired character design and charm. Like a strange mishmash of Ren & Stimpy, Invader Zim and maybe a dash of The Nightmare Before Christmas, the presentation aims to please with healthy doses of booger and fart humour and bizarre moments of quirky song and dance.

Vibrant voice acting and animation help muster enough flair to keep interest in the average 3D models and sound design. Fans of the previously mentioned animated treats may find this too derivative to embrace, but if you’ve never seen anything like The Kore Gang before, its light-hearted yet dark and gonzo approach to storytelling can be eye-catching.

The Kore Gang pits gamers against 30-plus stages of action and platforming madness as our heroes attempt to stop these creepy under-dwellers known as The Krank Brothers. Piled into the mad scientist Dr. Samuleson’s brilliant Kore Suit are three adventure seekers: height-loving Pixie, eager to fight Madboy and his brainy Chihuahua, Rex. When taking control of the robo-wonder, the arms morph into shapes suitable to the pilot’s wants and needs. Being an adventurous climber, Pixie turns the Kore Suit’s arms into grappling hooks and is able to move quickly with a double-jump ability. When Madboy takes the controls, he’s able to punch with giant steel fists as well as lob bombs to keep his friends safe. Throwing the dog in the seat allows for helpful butt sniffing, looking dumb in a sweater and hydrant peeing. (I’m lying — he just uses his dog senses and picks locks.)

When all three characters are acquired, the stage is set for thrills and fun as you switch from each configuration on the fly to best fit the situation. Aimed at a younger audience, it’s very simple to figure out and it seldom demands that you quickly switch back and forth. There are some good moments to be had with creative boss battles and stage layouts, but the game never reaches its full potential. Essentially, almost every stage’s challenge to conquer is a fetch quest, which sometimes becomes fetch quests within fetch quests. Whether it’s collecting tiny creatures called Zeeks or punching live creature switches, you’ll be spending most of your time opening doors to go to the next part where you open yet another door.  Even though there are some entertaining gameplay elements available, the game doesn’t take full advantage of them.

Kids and die-hard completionists will be entertained long enough to search out all of the hidden Zeeks and other various items that unlock artwork in the title screen compendium. Featuring unlimited lives and very generous check points, even within boss battles, most will be able to knock this out in less than 10 hours, but there’s nothing much to entice gamers beyond that. With a good budget price of US$20, this could be a nice stocking stuffer for the young gamers. However, if you’re basking in the glory of other major Wii releases like Legend of Zelda: Skyward Sword or Rayman Origins, you can give this one a pass.

Nothing bad, nothing great, Atari’s The Kore Gang slips under the radar on the Wii with bizarre quirky characters, decent motion controls and a budget price point. Low level challenge and childish humour suggests this game is aimed at younger players, which I’m sure it can be a hit with. However, Wii owners hoping for another last hurrah title can look elsewhere.

By Jess Castro
This entry was posted on Tuesday, December 13th, 2011 at 1:24 pm and is filed under Jess Castro, Video Game Reviews. You can follow any responses to this entry through the RSS 2.0 feed. You can skip to the end and leave a response. Pinging is currently not allowed.