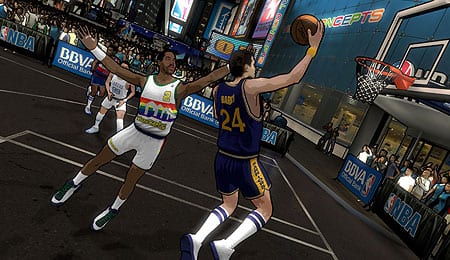 Tragically, there is no option to swipe Rick Barry’s legendary toupee during games.

After a rough few months for hoops fans, the past couple of weeks have brought good news aplenty. While clearly highlighted by the end of the NBA lockout, gamers have another reason to be jolly as NBA 2k12 has released the Legends Showcase for both Xbox 360 and PlayStation 3. Priced at 800 MS Points (US$10), the DLC introduces a unique graphical style, several new game modes and tons of hardwood legends.

Graphically, the Legends Showcase is a dramatic departure from the main game as it recreates over 100 historic players with a cell-shaded style. It’s not as sharp as the traditional character models, but it helps make the DLC feel more like a standalone than an add-on. The production values don’t stop there either, as there’s also new commentary that works to emphasize the playground vibe 2k Sports is looking to capture.

Beyond the visual changes there are also five new game modes: 3-on-3 Era challenge, 2-on-2 Teammate challenge, HORSE, 21 and a customizable pickup game. Of that group, HORSE is easily my favourite as it’s completely different than anything found on the disc. Here you square off against up to three opponents to pull off an assortment of reality-defying shots — it’s a lot like that old McDonald’s commercial with Michael Jordan and Larry Bird.

Shots are selected with the d-pad. After that you’ll have the option to “call your shot” (bank or swish) and adjust the trajectory of the ball. A sweet spot appears and you’ll need to stop the meter inside that area to nail it. Between the variety of shots and potential challenge level based on your opponents you can spend a lot of time messing around in HORSE.

For a more traditional approach, the 3-on-3 Era challenge is the mode of choice as each of the last five decades (’60s, ’70s, ’80s, ’90s and ’00s) is represented with two teams of signature stars. It’s fun to take your legends and match them against other all-time greats in intense half-court games. There’s also an NBA Jam-esque 2-on-2 ladder system that will probably be of particular interest to fans of the ’80s and ’90s given the player selection.

Twenty-one plays out exactly like you’d think as you can have up to four players in a free-for-all for basketball supremacy. Since I typically trend toward running the point and working an offense in NBA 2k12 I lacked the one-on-one (much less one-on-three) chops to really excel in this mode, though those that relish taking opponents to the rack should enjoy it.

Perhaps the biggest selling point for many will be the inclusion of 150 historical players, which once again should appeal primarily to those that grew up with the NBA of the late-’80s and beyond. As someone that checked in during the early ’90s, it was pretty cool to see players I grew up watching represented here.

If you’re looking for a change of pace from the standard NBA 2k12 gameplay and have any passion for the history of basketball, you’re likely to find a lot to like in the Legends Showcase. It offers up loads of new content at a very reasonable price.

By Herija Green
This entry was posted on Saturday, December 10th, 2011 at 12:10 pm and is filed under BASKETBALL, Herija Green, Video Game Reviews. You can follow any responses to this entry through the RSS 2.0 feed. You can leave a response, or trackback from your own site.