The Second Annual 12 Days of Code-mas! 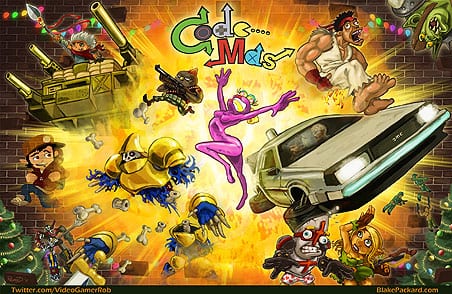 Believe it or not, it’s that time of the year again. Time for Gamer Claus to hand out CODES! CODES! CODES! to all the boys and girls. For 12 glorious days starting Tuesday, December 13, and ending Saturday, December 24, we’ll be selecting winners, springing surprises, dropping codes and giving away some awesome games.

Of course, none of this would be possible without lots of support, so I’d like to thank: Activision, Epic, Microsoft, Sony, SEGA, THQ, Capcom, Twisted Pixel, Robot Entertainment, Double Fine, Telltale Games, Signal Studios, Supergiant Games, Trendy Entertainment, Zen Studios, Hothead Games, Reverb Communications, Bender/Helper Impact and Forty-Seven for their help in putting this together.

And also a very special thank you to Blake Packard, who once again did an awesome job with our “greeting card.” Please feel free to check out the full-sized image here.

Step 2. Tweet the following: “Follow @VideoGamerRob and enter to win one of more than 15 titles during the 12 Days of Code-mas — http://bit.ly/uTLJF4 #codemas” — Please make sure to include the hashtag for tracking purposes.

Please note the order in which games are handed out will be random based on winner preferences EXCEPT Call of Duty Elite and Gears of War 3 Season Pass, which will be awarded on Saturday, December 24, the final day of the contest.

Good luck everyone, and happy holidays from all of us at RotoRob!

By Herija Green
This entry was posted on Friday, December 9th, 2011 at 12:34 pm and is filed under Contests, Herija Green, Video Game Reviews. You can follow any responses to this entry through the RSS 2.0 feed. Responses are currently closed, but you can trackback from your own site.