Video Game Review: Lord of the Rings: The War in the North 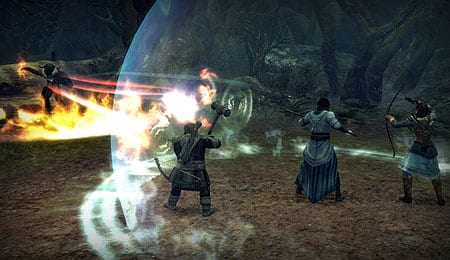 None shall pass… my, uh, impenetrable bubble.

The year 2011 of the Gregorian calendar, this being the account of Herija Green, High Reviewer of RotoRob.com, and the receiving of a copy of Warner Bros Interactive’s Lord of the Rings: War in the North.

It has come to me. The One Game. It shall be an heirloom to this website, and all who see my words will read them, and be bound to their verdict. I will risk no harm to it, for it is precious to me…

Each character possesses two melee attacks (standard and heavy) along with a ranged attack, which switches the camera to an over-the-shoulder view. When in melee combat you can employ powerful unique abilities by holding down the right trigger to modify your strikes. Defensively, you can block as well as execute an evasive maneuver. Blocking felt out of place mapped to the shoulder, and as a result I used evasion almost exclusively throughout the game.

In terms of secondary functions, clicking the right stick brings up a compass, and the d-pad allows you to give basic attack/defend instruction to your A.I. teammates and consume potions. Issuing commands felt spotty: sometimes I’d get confirmation the order was given, other times I wouldn’t. There’s also the ambiguous nature of the commands as there appeared to be no way to instruct them to attack a specific target, and it’s unclear what exactly they’re supposed to be defending (a spot, themselves, you?). Even with some minor issues, though, the controls get the job done.

As you’d suspect, War in the North favours the look of Peter Jackson’s movie trilogy with convincing renderings of Ian McKellen as Gandalf, Elijah Wood as Frodo Baggins, Hugo Weaving as Elrond and so forth. All of Middle Earth’s various creatures, from eagles to Uruk-hai, are also based on the film’s vision, and even the original characters look as though they could’ve been lifted from a deleted scene. All of which creates a nice continuity with those that know and enjoy the movies.

Outside of the strong character models, you’ll find well constructed (albeit almost entirely linear) environments to traverse that run the gamut from creepy to beautiful. Combat animations are strong with a respectable amount of variety and some brutal slow-motion kill strokes that will have you hewing limbs and heads from Mordor’s servants.

Musical accompaniment is surprisingly sparse in War in the North, leaving the voice acting to account for much of the aural experience. Unfortunately, the three main characters are uneven in their delivery and never convey the needed emotion to befit their plight. The worst offender is the dwarf, Farin, who lacks the gruffness of Gimli and just doesn’t mesh. There are also numerous voice roles from those that appeared in the films, but with the exception of Gandalf they don’t sound much like their counterparts, which is a bit disappointing — why use their likeness but not attempt to match their voices?

Middle Earth is undoubtedly one of the most revered fantasy worlds around, and as such I’d count the decision to create a story that runs parallel to the Lord of the Rings trilogy to be fairly ambitious even if the finished product plays it safe. The game follows a trio of heroes — Eradan (a Dunedain ranger), Andriel (an Elven Loremaster) and Farin (a Dwarven warrior) — tasked with combating one of Sauron’s lieutenants, a man named Agandaur, as he carries out the Dark Lord’s bidding by lasting waste to the northern lands.

Early on the story overlaps with The Fellowship of the Ring. First, you’ll meet Aragorn at the Prancing Pony, where you’re instructed to run interference while he escorts Frodo to safety. Later on you’ll get a chance to talk with several members of the fellowship as they prepare to embark on their journey. After those early chapters, though, the story becomes focused exclusively on the three unlikely companions and their mission to thwart Agandaur.

While it’s fun to do the old meet and greet with established characters, the game struggles to flesh out the newcomers enough to make them engaging. Everyone is only too happy to battle to the end in support of anyone they come across as though they were lifelong allies. On the villain side, Agandaur looks menacing enough, but you never actually see him do anything that suggests he’s a formidable or dangerous foe — with few exceptions it’s implied through conversation. It’s a decent enough tale, but I came away feeling more could’ve been done with the license.

Combat in War in the North is standard hack-n-slash fare as your three-person team battles through hordes of orcs, goblins, trolls and Uruk-hai. Enemy variety is not among the game’s strong points as outside a couple of locations that feature area-specific foes like spiders and wights you’ll find yourself facing the same handful of enemy types throughout.

Where the game does a nice job of encouraging advancement is in the finding of new and more powerful loot. There’s a definite sense of progression that comes from obtaining a cool new piece of armour or a magical blade, and although not every piece of equipment sports a unique look, there’s enough “families” of items that a lack of diversity in your appearance isn’t an issue. Also, along with better armour and weapons you’ll learn new abilities as you gain levels.

Teammate A.I. was usually competent, though during some tougher fights when there are a number of strong enemies, it becomes apparent that they’re not going to provide much legitimate help. This leads to some frustrating difficulty spikes toward the later stages of the campaign that appeared to be designed with co-operative play in mind. In fact, when playing solo in these situations, about the most you can hope for is that they stay upright long enough for you to thin the number of enemies.

Another pitfall of playing alone prohibits you not only from freely switching between characters, but also from overseeing the distribution of skill points from leveling and equipping of newfound armour and weapons. That’s not to suggest the computer isn’t leveling your character and donning new gear — it most certainly is — but you’re completely divested from the process. And not only that, I have no idea where the computer was acquiring its new items as roughly 95 per cent of what I picked up was for the class I was working at the time. There is no shared inventory.

Co-operative play is available both online and off, providing what is arguably the intended way to play based on the restrictive elements found in single player. Things ran smoothly online and couch co-op was enjoyable, but as a veteran of games like Torchlight, I found I preferred the freedom of going it alone despite the handful of drawbacks.

Even though it stumbles over some odd (and counterintuitive) choices here and there, War in the North covers all the requisite bases of an action RPG against the always welcome backdrop of Middle Earth — and if you’re a fan of the genre, that’s undoubtedly a winning combination.

By Herija Green
This entry was posted on Thursday, December 8th, 2011 at 11:11 am and is filed under Herija Green, Video Game Reviews. You can follow any responses to this entry through the RSS 2.0 feed. You can leave a response, or trackback from your own site.