The Wire Troll: Matt Moore on a Nice Run 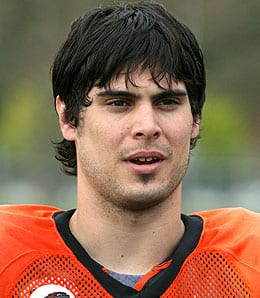 Matt Moore has been getting it done for the Dolphins in recent weeks.

Welcome to the Week 13 edition of the Wire Troll. This is the last week of the regular season in many Fantasy leagues, and hopefully you’re still in the running for a playoff berth. I hope that our offerings this week will help pave the road to Fantasy success as the NFL season enters the home stretch. Now’s the time to tool up for Fantasy’s second season; and if you’re way out in front of the pack, don’t rest on your laurels, as all it takes is one huge week to bring you down.

Speaking of being brought down, one of Week 12’s signature moments came on Thanksgiving Day, when the Cowboys Jason Witten became entangled with Dallas cheerleader Melissa Kellerman following a tackle near the sidelines. The incident launched countless one-liners from would-be comedic hacks, and even a few tweets from the loquacious lovely herself — until some mysterious things happened to her account barely three minutes into her 15 minutes of fame. All it did for me was add a heretofore-undocumented reason to the list entitled “why I want to be an NFL player.” The incident marked the second time in three weeks that the Cowboy cheerleaders had, err… landed in the news; recall that Bills wideout David Nelson presented his girlfriend Kelsi Reich with the football after scoring a TD against her beloved Cowboys. Nice gesture, David, and we recall it here not out of any semblance of sentimentality; we simply look for any excuse to drop links like these into our weekly magazine… heck, the Troll will grab attention any way he can get it.

And speaking of which, Jennifer Lopez was seen vacationing in Hawaii with 24-year-old backup dancer (“backup dancer”? Really?) Casper Smart and Ms. Lopez’s 3-year-old twins (no, not those twins). A source stated that Smart was “great with the kids.” Given her current romantic endeavour, apparently the 40-year-old Lopez has something of a way with kids herself. Boy, what is he thinking? Oh… right.

For all the latest waiver wire-worthy Fantasy news, be sure to follow me and the Wire Troll on Twitter. Good luck this week.

Reminder: There is a Thursday night game: Philadelphia at Seattle. Be sure to get your lineups in on time.

Matt Moore, Miami Dolphins: Moore has quietly (which is the way football-related things happen in Miami these days) cobbled together a nice little run, averaging 225 passing yards and tossing seven touchdown passes over his last four outings. He draws a favourable matchup this week against Oakland, which has allowed 239 passing yards per game and 20 TD passes this season.

Vince Young, Philadelphia Eagles: Granted, his 400-yard passing performance Sunday was against the porous New England secondary, and granted, quite a few of those yards came in garbage time. Now then, let’s balance those facts out by acknowledging that if DeSean Jackson had displayed the hands and discipline of a decent mid-level collegiate wideout, the Eagles might have stayed in the game and Young’s numbers would have still been outstanding. Michael Vick is expected to miss another week, and Young should have a decent day against the rather mediocre Seattle pass defense.

Donald Brown, Indianapolis Colts: Yeah, yeah, his 80 rushing yards Sunday came against the feeble Carolina run defense, but Brown has averaged 68 yards per game over his last three outings, and has also snagged a pair of receptions per contest. The Patriots have given up 102 yards rushing per game this year, so Brown could be in for a decent day again in Week 13.

Peyton Hillis, Cleveland Browns: The Browns said that they weren’t going to rely too heavily upon Hillis Sunday, then turned around and handed him the rock 19 times and tossed him a pair of passes. He didn’t look impressive, but if Hillis is healthy and motivated he could be a fine grab off the waiver wire if he was dropped in your league — and he was available in about 22 per cent of Yahoo! groups when we went to cyber-press.

C.J. Spiller, Buffalo Bills: Well, he didn’t do a heck of a lot with his 22 touches Sunday, but the important thing was that Spiller was the focal point of the Bills’ offense. He’s more of a scatback than a bulldozer, and he may lose some short-yardage work to Tashard Choice before too long, but right now Spiller appears to be the man. Spiller is especially valuable in PPR formats, but the Bills’ new feature back is worth owning in every league as long as he’s the starter in Buffalo.

Roy Helu, Washington Redskins: Coach Mike Shanahan declared Monday that Helu is absolutely his starting running back, so look for the second-year man to be inactive in Week 13 — or else lose touches to Ryan Torain or possibly John Riggins. Sorry, we had to take a shot at Shanny and his fickle ways with all things running back. Actually, this endorsement has a genuine feel to it, especially in light of the fact that Helu racked up 162 total yards and a touchdown Sunday. He received 30 total touches and was clearly the main force in the Redskins’ attack. We’ve known the talent was there for a while, but now if looks like the ‘Skins are finally ready to let Helu do his voodoo. Grab him if he’s out there.

Santana Moss, Washington Redskins: The ‘Skins’ top wideout saw his first game action Sunday since breaking his hand in Week Six, and looked pretty good given his limited playing time. Moss had amassed a rather mediocre 25 catches for 301 yards and two touchdowns before he went down, but keep in mind that he piled up a 93-1,115-6 line last season. Quarterback Rex Grossman looks to be finding his way, having thrown for 606 yards and four touchdowns over his last two outings. The going won’t be easy against the Jets’ solid pass defense in Week 13 (hence no Grossman in the Troll), but facing his old team will doubly motivate Moss. Even if Moss struggles against Darrelle Revis and the Jets Sunday, he’s a nice component to add if you’re heading to the playoffs.

Riley Cooper, Philadelphia Eagles: The former Florida Gator has performed quite admirably in Jeremy Maclin’s stead, snagging eight receptions for 146 yards and a touchdown over the past two weeks. And unlike teammate Jackson, Cooper can actually catch the football. Maclin’s shoulder is still bothering him, and he looks like a no-go again in Week 13; Cooper has become a favourite target of Young and he makes a fine pickup as a flex play in deeper leagues.

Atlanta Falcons: The Falcons are second in the league against the run, and they’ll face off in Week 13 against a Houston team that figures to pound the rock early and often. The Texans will be without both their starting and backup quarterbacks, and the Falcons will throw everything they can at rookie (and 2011 fifth-round draft pick) T.J. Yates. Atlanta is not an elite unit by any means, but its very favourable matchup in Week 13 makes it worth a look if your regular squad is up against a tough foe.

Colin McCarthy, LB, Tennessee Titans: The rookie has done an admirable job filling in for the injured Barrett Ruud, piling up 28 total tackles and one interception over his past three games. Ruud is still nursing a groin injury, so grab McCarthy and keep an eye on the veteran’s status for Week 13. If Ruud sits again, roll McCarthy out there in just about every IDP format.

Kurt Coleman, S, Philadelphia Eagles: The Eagles’ secondary has been a shaky group this season, but Coleman has become its bellwether. The rookie has accounted for 40 total tackles over his last four games, and should continue to produce strong numbers in that category. He has also snagged three interceptions, though all of those picks came during the same game. Coleman is a good add in deeper IDP leagues.

By Buck Davidson
This entry was posted on Wednesday, November 30th, 2011 at 12:30 pm and is filed under Buck Davidson, FOOTBALL, The Wire Troll. You can follow any responses to this entry through the RSS 2.0 feed. You can skip to the end and leave a response. Pinging is currently not allowed.