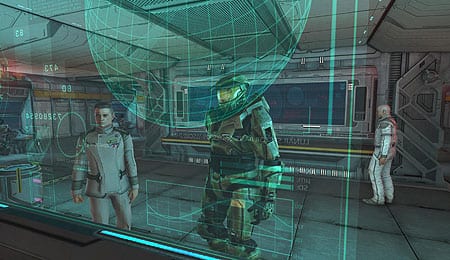 *SPOILER ALERT* Things do not end well for Captain Keyes.

As I mentioned during my review of Halo: Reach, the original Halo was the driving force behind my initial purchase of an Xbox — a story I’m sure is hardly unique among the gaming populous. Now, a decade later, Microsoft is revisiting the game that put its system on the map with the release of Halo: Combat Evolved Anniversary.

Microsoft’s 343 Studios was tasked with taking Bungie’s classic and giving it a comprehensive facelift into the high-def era. However, the core gameplay was left intact, which begs the question whether a 10-year-old shooter — even one as revered as the original Halo — can still resonate with no substantive additions as anything more than nostalgia fodder.

Not a lot has changed from the original Xbox controller to the current one, though the elimination of the black and white buttons used for toggling grenade types and activating Master Chief’s flashlight led to some minor tweaking. Most notable is that melee attacks have moved from “B” to the right bumper with grenade switching now occupying “B” (mirroring Reach). It’s a tight setup that handles all of the Chief’s on-foot exploits well.

Vehicular sections are more of a mixed bag as that aspect improved over the years. The Warthog feels good in all its fishtailing glory, and the Ghost handles like it always has (sans speed boost). On the other side of the ledger, the Banshee feels extremely clunky versus later games in the series, while the Scorpion doesn’t maneuver well and has sketchy aiming.

There is also limited Kinect support with Halo: Anniversary. Purists may bristle at its inclusion, but in reality it’s confined to voice commands and is entirely tangential to the game itself. Although you can do a few combat tasks such as reloading and tossing grenades, the most interesting feature is the ability to scan things like enemies, guns and vehicles for a detailed overview in the game’s “Library.” You certainly don’t lose anything by not having a Kinect, but it’s a nice non-obtrusive use of the peripheral.

Although Halo: Anniversary does feature completely re-mastered high-definition graphics, there’s no question it’s not on par with most modern shooters. If you spent lots of quality time with the original that won’t matter, and in fact there’s a dated charm to the upgraded visuals that makes you feel like 343 Studios embraced restoring the game as a labour of love. Without those warm fuzzies, though, the shortcomings aren’t as easy to overlook.

Those that want to truly relive the original experience as it was created are free to switch between the new and classic graphics at any point by pressing the “back” button. I did it a few times during my playthrough, mostly to check out scenery, but it’s not very easy on the eyes.

One of the things I remembered vividly standing out when the game first released was the soundtrack, and that still holds up tremendously. Weapon fire and explosions have been given an overhaul to pack more punch to good effect. The voice acting is solid even if the dialogue can be kind of hokey.

While most have likely played the game or are at least familiar with the basic story I’ll still cover the (very) broad strokes. Halo: Combat Evolved Anniversary picks up right where Reach left off with Earth forces fleeing from the Covenant and eventually being forced to seek refuge on a Halo ring world. The campaign proceeds to follow the Master Chief over 10 levels as he battles Covenant forces and the Flood, a parasitic life form, while learning the origins and purposes of the Halo rings.

Of course, what made Halo such a landmark title a decade ago wasn’t its plot; it was the scale, level design and intensity of the combat. Given the exponential growth of the first-person shooter market it should come as no surprise that not all of these items impress the same way they did in 2001. Specifically, there are issues with repetitive design and pacing that time has not been kind to.

When I harkened back to my days with the original I thought of moments like exiting the escape pod, storming the beach, fighting my way to the grav lift and battling enemies in a virtual blizzard. All those sections are still great, but there are also levels when you’re going through the repetitive hallways of a large ship or the seemingly endless flood-infested library where it’s essentially four floors of the exact same thing — right down to holding a position until the Monitor returns.

Once again I feel obligated to write that long-time fans will probably at least enjoy the nostalgic aspects of those missions, if not their structure. However, were something as repetitive and elongated as the library level to be presented in a new venture today gamers wouldn’t be as forgiving.

Those isolated sections aside, Halo: Anniversary holds up extremely well. Enemy A.I. is still solid and does a good job of evading weapon fire and making life tough. Skulls and terminals have also been added to offer more rewards for exploration. The skulls serve as modifiers to increase replay value while the terminals tell a somewhat confusing back story for 343 Guilty Spark.

It’s tough to give a definitive length on the campaign as play style, skill and familiarity all factor heavily into it. Pencil it in at 10 hours with the understanding your mileage will vary. Also, like the original, the campaign mode can be played co-operatively via split-screen while Xbox Live support has been added as well, which is a nice touch for those whose Halo buddies have scattered across the country.

There is also a competitive multiplayer element to Halo: Anniversary, but it doesn’t feel like a natural extension of the campaign. That’s because the entire mode is played through Halo: Reach’s multiplayer so you’re getting that game’s visuals and gimmicks such as armour abilities. Outside of a few nostalgic playlists and tweaks this feels exactly like a Reach add-on — and in fact is offered as the standalone Anniversary Map Pack (1,200 MS Points) for those not interested in the campaign.

All told there are six maps to choose from, each with a classic and updated look: Battle Canyon (Beaver Creek), Breakneck (Headlong), High Noon (Hang ‘Em High), Penance (Damnation), Ridgeline (Timberland) and Solitary (Prisoner). The maps have all received a Reach overhaul to bring the graphics up to snuff, and they’re all instantly recognizable to veteran Halo players even in their slightly modified forms. A new Firefight map (Installation 04) is included as well.

It’s not difficult to see why the decision was made to have the multiplayer run on the Reach engine and essentially simulate the Combat Evolved experience, but there’s a disconnect from the re-mastered campaign and the multiplayer especially considering how many Halo: CE and Halo 2 maps have already found their way into the 360-era releases. Playing through the campaign evoked all kinds of memories of my times with the original. Playing the multiplayer felt like another map pack.

If you have fond memories of Halo or are looking to introduce someone new to the phenomenon, Halo: Combat Evolved Anniversary is a fantastic buy. The HD upgrade is great and the campaign is still a blast to play through for the vast majority of the time. Multiplayer isn’t the nostalgia-filled romp that the campaign is, but the maps are fun and provide added life to Reach.

By Herija Green
This entry was posted on Tuesday, November 22nd, 2011 at 2:35 pm and is filed under Herija Green, Video Game Reviews. You can follow any responses to this entry through the RSS 2.0 feed. You can leave a response, or trackback from your own site.