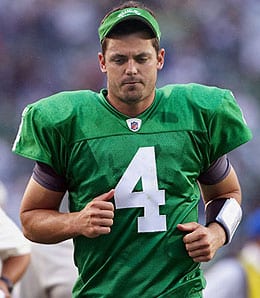 Week 11 is now behind us, so let’s take a look at a few Fantasy storylines we’re following as we head towards the Thanksgiving games on Thursday.

Of course, Skelton highlighted our Wire Troll recommendations last week after he had won two straight games starting in place of injured starter Kolb, and looked pretty damn good in doing so. Well, the good vibes ended in a hurry Sunday in San Francisco as Skelton was simply skewered, and once he had half as many interceptions (three) as completions (six) early in the fourth, Whistenhunt mercifully pulled him in favour of Bartel.

Now before you jettison Skelton, he’s expected to get another start Sunday if Kolb still isn’t ready to return and this time he’ll face the Rams, who he already looked very good against two weeks ago.

After he had tossed 11 touchdowns and no interceptions in the past three weeks combined, should we consider Aaron Rodgers’ three-TD, one-interception showing against Tampa Bay Sunday a disappointment? This dude has given us a new baseline of what constitutes a good game. Rodgers’ count for the year: 31 touchdown passes against four interceptions.

Holy fuck. If you’ve got Rodgers on your Fantasy team, you’re probably ready to take a Lambeau Leap into a crowd comprised of Jabba the Hut and his entourage.

For perspective, let’s look at the all-time greatest seasons for TD passes. In 2007, Tom Brady tossed a record 50 TD passes and was picked eight times; in 2004 when Petyon Manning hurled 49 TD passes, he was intercepted 10 times; during Dan Marino’s legendary 1984 season, he had 48 TD passes and threw 17 interceptions.

You sensing a pattern here? Never before has a quarterback reached this kind of rarified air with such few picks. Assuming Rodgers doesn’t hit a rough spell and toss a few interceptions between now and the end of the season, he has a chance to put up a campaign that will compare very favourably with the three aforementioned seasons.

The big news in Chicago was the broken thumb suffered by quarterback Jay Cutler. He’ll need surgery which will likely end his season and leave the Bears’ passing duties to Caleb Hanie. Cutler’s passing accuracy has slipped for the fourth straight season, but of course, Hanie’s numbers will be even worse, so if you’re holding onto Chicago receivers right now, you need to temper your expectations for the remainder of the season and it’s time to dump fringe Bears receivers like Devin Hester.

Christian Ponder was slightly better on Sunday, going 19-for-33 for 211 yards with two touchdown passes, but he got picked three times, severely capping his value. The rookie has potential, but this season is simply a baptism by fire. He’ll be better for it one day, but other than flashes of greatness, Ponder is mostly taking a beatdown this season.

By RotoRob
This entry was posted on Monday, November 21st, 2011 at 2:49 pm and is filed under FOOTBALL, Pigskin Droppings, RotoRob. You can follow any responses to this entry through the RSS 2.0 feed. You can leave a response, or trackback from your own site.