Anna Benson is Back 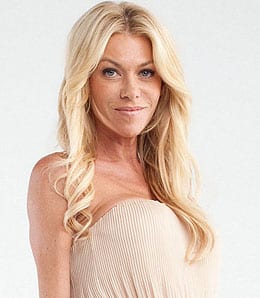 Chantel Kendall has moved on from a baseball star to rock and rock royalty.

I guess it’s been too long since the world had its fill of Anna Benson, considering her husband Kris retired at the beginning of the year – which severely stunted the former stripper’s celebrity status.

But not to worry, Anna fans, she’ll be back in the spotlight soon as the headlight… err… headline attraction of the upcoming VH1 series Baseball Wives, which will try to build on the success of Basketball Wives.

According to Benson, however, Baseball Wives are nothing like Basketball Wives because “we are classy.”

The show will gather a group of past and current wives and girlfriends of current and former big league players and let them bitch slap each other with the hope that some entertainment results. Pap for the mindless — a formula that somehow works on most television audiences.

Also appearing on the show will be:

Here’s a look at the full cast of Baseball Wives in all its glory.

Now the big question is who’s missing from this collection? Surely there must be way hotter player wives/girlfriends who actually are classy enough not to be on this show. Here’s an All-Star team for you:

Brittany Binger: She’s Grady Sizemore’s girlfriend. Take one look at her and you begin to understand why Sizemore had such a tough time coming back from his injuries the past few years. Would you ever want to leave bed if this tomato were lying beside you? I didn’t think so.

Jamie Kotsay: Mark Kotsay’s wife is one fine looking woman. She looks like she could outhit her husband, which — come to think of it — wouldn’t be that great a feat. But still… meow.

Kiana Kim: Kim is Pete Rose’s girlfriend. Yowzer! What do you want to bet those puppies aren’t real? I’d probably wager about the same amount of money I’d bet that Charlie Hustle doesn’t give a hoot.

Dominique Piek: C.J. Wilson’s girlfriend makes me want to throw left-handed… or at least do something with my left hand. Where do you think Wilson will sign for 2012? Wherever the hell she wants him to.

Emily Kuchar: Zack Greinke’s wife looks like she knows a thing or two about bringing the heat. Greinke is tapping that ass and he still suffers from depression? WTF?

Jennie DeRosa: The wife of Mark DeRosa is one sexy mama. If I was DeRosa, I would definitely require plenty more convalescing this season, especially if Jennie were my nasty nurse.

Juliana Ramirez: She’s Manny’s wife. If Manny being Manny means getting busy with this hottie, sign me up.

Daniella Gamba: Nick Swisher’s wife is simply… spectacular. Yet another reason to hate the Yankees.

So who makes your list for the hottest baseball wives/girlfriends? Send ’em along and we’ll post ’em!

By RotoRob
This entry was posted on Saturday, November 19th, 2011 at 3:53 pm and is filed under BASEBALL, RotoRob. You can follow any responses to this entry through the RSS 2.0 feed. Both comments and pings are currently closed.