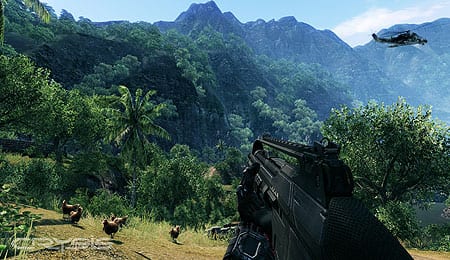 Uh-oh, chickens… look out! They’re coming right for us!!!

Given the sheer number of games I review in a month, I don’t get as much time for recreational gaming as I’d like. So when I tell you that I bought and played through Crysis 2 twice you should have an idea of the high regard I hold in it. Now Electronic Arts is bringing the original to consoles. Initially released on PC in 2007, Crysis has finally found its way to both Xbox Live and the PlayStation Network. And even after four years, this title holds its own on the FPS scene.

Making the move from PC to console is often a difficult one when it comes to controls. It’s handled seamlessly here. Triggers and shoulder buttons handle aiming, firing and engaging your suit’s two primary modes (armour and stealth). Holding down one of the face buttons brings up a menu of all your available weapons, which are then easily selected with the left stick or d-pad. Cycling through fire modes and switching out attachments are well implemented as well.

There is one area where the game feels behind the times: melee attacks. They lack impact and fall well short of the awesome killing animations from Crysis 2. Grabbing enemies is also clunky as you’re forced to wait for an on-screen prompt before being allowed to grab them by the throat.

If I didn’t know going in that this game was four years old I never would’ve guessed it. The tropical island that serves as the setting for much of Crysis looks fantastic with assorted buildings and encampments dotting the landscape — many of which are destructible with first-rate explosions. Non-linear progression from one checkpoint to the next allows for a lot of exploration, and everywhere you turn is just lush jungle, beautiful trees and flowing water. It’s gorgeous.

Character models aren’t as slick as the backgrounds, though, particularly when you see them frozen in bizarre and unnatural looking death animations. I also picked up numerous cases of body parts clipping through solid objects. It’s nothing that’ll affect your enjoyment of the game, but it’s a little wonky.

Normally I toss out a one-liner about a game’s sound effects. In this case, however, that would be a huge disservice to Crysis. The gunfire has to be heard first hand to be fully appreciated. Sniper rifles boom through your speakers while silenced SMG fire whistles through the air. The voice acting is decent enough, and the soundtrack does a good job as well.

Set in 2019, Crysis begins as a relatively standard third-person shooter. You’re part of an elite unit dispatched to an island that has been cordoned off by the North Korean government after a group of American scientists made a game-changing discovery. Information is on a need-to-know basis, however, and your superiors have decided you don’t need to know much.

Of course, the relatively straightforward recon mission turns out to be anything but, and now it’s up to you (Nomad) to unravel what’s really happening on the island. You’ll have sporadic support from other members of your squad throughout the game, though for the most part you’ll be going it solo.

That means how you proceed is almost entirely up to you. Yes, you have specific mission objectives to carry out along with optional secondary goals. However, what Crysis does exceedingly well is offer you multiple ways to accomplish them. You can make liberal use of the Nanosuit’s stealth field and stay off the roads to minimize enemy entanglements. Conversely, you can go in guns blazing and shoot anything that moves.

Travel on foot or go by vehicle. Snipe enemies from 100-plus meters out or unload on them with a shotgun from point-blank range. It’s all up to you and it makes for vastly different gameplay that practically begs to be experienced more than once.

As much fun as Crysis can be, it does have some drawbacks. Enemy A.I. is really uneven — sometimes foes are almost superhuman in their ability to spot you even when cloaked, while at others they’ll mill about at the bottom of a sniper tower while you pick them off with ease. Also, for owning such superior tech you certainly fall victim to a high number of deaths. Plus, these deaths are often the work of multiple enemy soldiers that seem to appear out of thin air (not in the camouflaged sense).

The game also makes a substantial shift about two-thirds of the way through, replacing the Korean soldiers with a completely new enemy. Ultimately it turns out to be an exciting switch, but initially things grind almost to a complete halt during a lengthy (and dizzying) trip through zero gravity. It’s a pacing issue, but don’t be discouraged because Crysis rebounds to close with a vengeance.

On the default difficulty setting it took around 10 hours to complete the game, which is a pretty good value for the asking price. That being said, it should be noted that the multiplayer component which was present in the PC version has been removed completely on consoles.

If Crysis 2 was your introduction to the series — as it was for me — and you enjoyed it I cannot imagine that you wouldn’t embrace this re-issue of the original. Even after four years it passes as contemporary and offers more for US$20 than a lot of titles do for US$60.

By Herija Green
This entry was posted on Friday, October 21st, 2011 at 10:53 am and is filed under Herija Green, Video Game Reviews. You can follow any responses to this entry through the RSS 2.0 feed. You can leave a response, or trackback from your own site.