The Losing Continues for the Pittsburgh Pirates 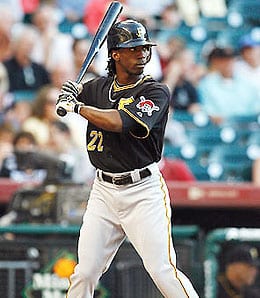 The Pittsburgh Pirates, owners of 19 straight losing seasons, are headed for two decades worth of misery thanks to an ugly August during which they’ve gone 6-16.

They had been in free fall since 2007, the year they won 68 games, but each subsequent season promised to be the start of the recovery.

Well, we definitely saw flashes of that recovery in a big way this year before their recent collapse.

The team got off to a relatively decent start, going 12-15 in April, then played .500 ball in May before really beginning to roll in June (16-11) and the first half of July.

Since then, however, Milwaukee has been virtually unbeatable and the Pirates have barely beaten anyone.

Pittsburgh now finds itself in fourth place, 16.5 games back of Milwaukee and just 4.5 games ahead of the fifth-place Cubs. Yes, the Pirates have lost 17 games in the standings in just over five weeks.

That’s not easy to do, even for a team with a rich tradition of losing.

On the plus side, attendance – which rose modestly last year as the team started to integrate some of its young talent – made big strides this year, rising to an average of 25,225 per game. That’s still only 19th in the majors, but considering they ranked 27th last year, it’s excellent progress.

Heading into the season, we expected the Pirates to be a much better team offensively, but one that would continue to struggle with its pitching.

In actuality, almost the complete reverse has happened. While the offense has continued to stagnate, ranking 26th in team OPS at 674 (compared a 678 mark last year that ranked 28th), the pitching has actually been mediocre – which is far better than most expected.

Last year, the Pirates finished dead last in team ERA and were the only team that averaged five earned runs allowed per game. This year, they’ve whittled that down substantially to 3.79, good for 13th in the majors.

While the last five weeks have been incredibly disheartening, it can’t take away from the progress made. The Pirates only need to win 10 of their last 34 games to reach 70 wins, which doesn’t sound like cause for celebration, but it would be their first such season since 2004.

While Andrew McCutchen hasn’t necessarily taken the gargantuan leap we thought he would this year, he continues to make progress, showing more power and patience and remaining a threat on the basepaths.

Unfortunately, Pedro Alvarez has completely flopped this year. Buoyed by his big finish last year when he was the NL’s Rookie of the Month in September, he was expected to take a huge step forward this year. Instead, Alvarez has bounced back and forth to Triple-A and has been extremely unproductive during his time in the Steel City.

Lyle Overbay regressed so far with the stick that the Buccos simply released him a few weeks ago. Neil Walker, who flashed some power promise as a rookie, has not built on that and his numbers are down almost across the board. Shortstop Ronny Cedeno continues to prove he’s a sub par hitter, and after enjoying his finest season on the basepaths last year, he’s completely flopped in that regard in 2011 thereby eliminating his only saving grace from a Fantasy perspective.

Outfielder Jose Tabata is another of the Pirates’ fine 2010 rookie crop that has endured a sophomore slump. He’s improved his on-base skills this year, but a quad injury cost him weeks. Still, the Pirates are obviously enthused with his progress, signing him to a six-year extension earlier this week.

Outfielder/first baseman Garrett Jones has jacked his OPS by 55 points, but is seeing much less action as he’s being sat against lefties. Mind you, it’s with good reason – he’s only hitting .164 with a 530 OPS against southpaws after last year being at least somewhat competitive against them (.220 BA, 621 OPS).

Yep, pretty much all the pleasant –and surprising – news for the Pirates has come on the mound. Closer Joel Hanrahan, a prime candidate to lose his job heading into the season, has been absolute money. Daniel McCutchen and Jose Veras have both been revelations in the bullpen.

Jeff Karstens, Charlie Morton, Paul Maholm, James McDonald and Kevin Correia – a rotation expected to get hammered all year long, has instead been very strong.

Karstens has slightly upped his still very modest K rate, but the 15 quality starts in 23 tries is what really catches the eye. Morton’s strikeout rate has headed in the opposite direction, but he’s somehow finding a way to actually win games, thanks mostly to a massively improved hit rate.

Maholm also cut his hit rate dramatically, but a shoulder injury could keep him out for the rest of the year. McDonald has not been able to duplicate the strikeout rate he flashed last year, but he’s the closest thing the Pirates have to a dominant hurler. And Correia, whose career looked over after his 2010 disaster, was a stud in the first half, before realizing that he was still Kevin Correia from July on. He’s also landed on the DL this week.

By RotoRob
This entry was posted on Wednesday, August 24th, 2011 at 7:33 pm and is filed under BASEBALL, RotoRob, Team report. You can follow any responses to this entry through the RSS 2.0 feed. You can leave a response, or trackback from your own site.