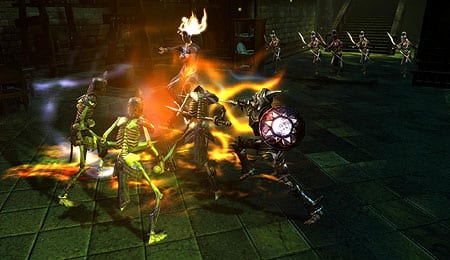 Not being a PC gamer, I had never played a Dungeon Siege title before. However, given Square-Enix’s pedigree in the RPG world I was immediately intrigued when it was announced that Dungeon Siege III would be making the journey to consoles. I wasn’t entirely sure what I was in for, but it didn’t take me long to realize it was something good.

Oft times I tend to think of controls in video games like referees in sports — if I don’t notice them they must be doing something right. In the case of Dungeon Siege III, though, the controls are so well done they stand out. Both basic and specialty attacks are mapped to the face buttons, which correspond to the meter over your character’s stats in the screen’s lower left-hand corner. These can be then modified with the triggers — left brings up defensive powers while right toggles more powerful versions of the offensive abilities you’ve mastered. The left shoulder button allows you to switch between your two combat stances, each of which has its own unique attacks.

Beyond the strong combat layout, the game also makes smart use of the d-pad. Push left and you’ll access a list of available quests. Push right and you’re in the equipment screen. And push up to create a breadcrumb trail a la Fable. Simplicity and ease of use were clearly focal points, and Obsidian really nailed them both. Even basic loot gathering (orbs and gold, not items) can be done by simply clicking in the left stick.

Outside of cut scenes, Dungeon Siege III takes place from an isometric view with the game’s various locations nicely rendered. Some of the dungeons are a bit dark on the default brightness setting, but since treasure glistens you shouldn’t miss anything vital. Where it can cause headaches is not noticing obstacles on the ground, which can foil a well-timed evasion roll. Still, it’s not much of an issue.

The game’s characters are all easily distinguishable from one another, and while not every item you equip changes your appearance, there are different families of items so by no means does every weapon or shield look the same. Magical effects course through empowered items, and one-of-a-kind items carry unique looks for some impressive results. Things tend to get hectic in combat, but the game’s frame rate never dipped even as spell effects and sword clashes filled the screen.

Even though the music in Dungeon Siege III is pretty much standard fantasy fare, it still does an excellent job of accompanying the on-screen action. On more than one occasion I found myself thinking about how much I was enjoying the ambiance, and the music had a lot to do with that. The voice acting is surprisingly solid with a large number of speaking roles handled well. Also, Star Wars buffs may recognize a sound effect once the fire jackal has been summoned.

Dungeon Siege III takes place in the land of Ehb, where a once-powerful group of protectors known as the 10th Legion is trying to rise again after being decimated by the mysterious Jayne Kassynder. It falls upon you (as one of the game’s four playable characters) to spearhead the Legion’s return to prominence whilst also defeating the powerful Kassynder. To do this you’ll need to gather a force capable of defeating her while forming allegiances along the way. It’s a tried and true medieval fantasy tale to be sure, but it’s well paced and proves to be quite enjoyable.

As noted, you’ll have your choice of four characters, each with their own style of play. There’s Lucas Montbarron (your standard melee-based warrior), Katarina (a witch that fights with a mixture of magic and guns), Reinhart Manx (mage) and Anjali (a mysterious archon that can switch between a spear-wielding human and an elemental fire form). Once you make your selection you’ll be guiding that character throughout the story. You do travel with one companion, though, and are free to switch between the remaining three characters at any time once you’ve encountered them.

Although Dungeon Siege III is best classified as an action role-playing game, the RPG elements here are pretty simplistic. Each character has access to nine abilities — six offensive (three for each stance) and three defensive — and you’ll eventually unlock them all as you level up. A subset of these are your proficiencies, and each of your abilities has two possibly paths to upgrade it.

For instance, Reinhart has the ability to attack with lightning. He is able to supplement that attack by either adding an effect that temporarily stuns the target, or he can make it so the lightning strike has the chance to ricochet and strike multiple foes. Another example would be Anjali’s summoned jackal. On one hand you can increase its hit points, while on the other you can add a burning status effect to its attacks. Each ability can be given a maximum of five proficiency points, and you’re free to mix and match by spending as many points on each option as you’d like.

There’s also a set of passive bonuses called talents you’ll gain as you level up, but the majority of your character’s critical statistics such as hit points, defense and attack power are primarily governed by the weapons and armour you have equipped. And while those other aspects of character progression may be lightweight, there are an absolute ton of items to acquire during your travels.

Much like Torchlight, items in Dungeon Siege III are colour coded. White are common, green are uncommon, blue are rare and orange are unique. There are few things better than opening an ancient tomb and seeing an item spring out with a lengthy orange title attached to it. It’s addictive and fun, yet still easy to manage.

Combat starts off fairly slow as you’ll be stuck using mostly default attacks against enemies that don’t offer up much resistance. The core elements of attacking, blocking and dodging ultimately don’t change much over the course of the game, but as your character starts to level up and unlock more powerful attacks things improve dramatically.

The improvements are in no small part due to the clever balance that the game delivers. Your basic attacks fill up a focus meter, which allows you to unleash your special attacks. In turn, using special attacks allows you to activate the power orbs seen below your focus bar. These orbs are then needed to trigger your defensive powers as well as the upgraded special attacks (unlocked after you “master” the default version of the attack). This little dance keeps things fresh and not-so-gently encourages you to utilize everything in your arsenal.

As well as all that functions, however, combat is not without its faults. Friendly and enemy A.I. is uneven with teammates not always playing to their strengths and enemies often becoming fixated on one member of the party even when the other is pummeling them. Targeting can be problematic as well as the game seems to frequently select counter-intuitive enemies. It’s obviously more of an issue with the ranged fighters, but even Lucas’ dashing attacks can send him flying right past the enemy you intended to attack.

The game’s multiplayer is also hit or miss. Offline co-op works well with seamless drop in/out functionality, but it still contains the same problem that online does — only the host gets to keep the loot and experience points earned during gameplay. That means if you’re joining someone else’s game you’re coming in as their version of the character, not your own. And when you leave the game nothing you did carries forward into your own game. It’s an unfortunate and significant misstep in an otherwise well executed multiplayer experience.

An engaging story, streamlined character progression and reasonably diverse combat make Dungeon Siege III a solid investment, even if the multiplayer isn’t the slam dunk it could’ve been.

By Herija Green
This entry was posted on Monday, June 20th, 2011 at 3:12 pm and is filed under Herija Green, Video Game Reviews. You can follow any responses to this entry through the RSS 2.0 feed. You can skip to the end and leave a response. Pinging is currently not allowed.