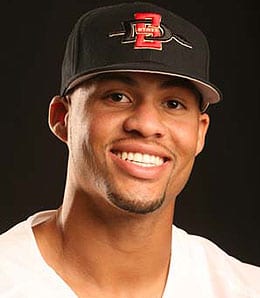 Cory Vaughn has the power — and the pedigree — to advance to the majors.

Things aren’t going so well for the New York Mets at the major league level these days, but down on the farm there’s reason for excitement given the pro career that Cory Vaughn is putting together in less than a year.

The son of ex-big leaguer Greg Vaughn – who knew a thing or two about mashing in his day – Cory was taken in the fourth round of last year’s draft and proceeded to have a record setting season at Rookie level Brooklyn of the New York Penn League.

He set franchise records with 14 homers and 56 RBI in 72 games while adding 45 runs in a phenomenal debut.

Vaughn has been moved up to the Class-A Sally League this season and his first taste of full-season ball has certainly not slowed him down. On Friday night, he was 1-for-3 with a run and two walks, giving him hits in six straight games during which he’s gone 11-for-23 with eight runs, five RBI, four walks, three doubles and a homer.

Like most offspring of ex-big leaguers, Vaughn reportedly has that air of a major leaguer already and that is often half the battle. But it’s obvious this kid has talent – and size (6’3”, 225) – as well.

Vaughn turned 22 earlier this month, so I’d really like to see him advance quickly before anointing him as a can’t miss prospect, but the Mets have to be thrilled with what they’ve seen so far and must be considering bumping him up to High-A shortly.

Still in the Sally League, Jakob Dalfonso is making nice progress with the bat. He’s homered in four straight games, getting at least two hits and two RBI in each of those games to take his May BA up to .330 with seven dingers and 15 RBI. The Braves’ 18th round pick in 2009, Dalfonso is only 21 but is already a man without a fielding position, seeing action at first base and outfield last year, but mostly DHing so far in 2011. It’s kind of surprising considering in high school he was a shortstop that was lauded for his tools.

RHP David Buchanan, the Phillies’ seventh round pick last year, has looked much better in Class-A than he did in his pro debut in the NYPL in 2010. He’s gone 6-2 with a 2.21 ERA while displaying better command and improved hit rates. Buchanan’s numbers don’t jump out at you because he’s not a dominating hurler by any stretch, but he’s excelled at pitching to contact and keeping the ball in the park (just two homers allowed through his first 119 IP as a pro). Control has been his Achilles Heel, but it’s promising that he’s made progress in this regard so far in 2011.

The Diamondbacks really need to move up first base prospect Yazy Arbelo to see what he can do against better competition. The team’s 26th round pick last year is already 23, so the numbers he’s been putting up at Class-A South Bend need to be taken with a grain of salt. On Friday, he was 1-for-4 with a run and his 15th double to go along with 13 homers in 47 games. Arbelo is batting .304 with 11 doubles in May and is up to 30 runs and 25 walks with an OPS of 1010 for the season. The D-Backs signed him for only $7,000 so he’s definitely been a steal so far, but as mentioned, I want to see him put up these power numbers against better pitching before jumping on his train.

Kevin Siegrist wasn’t taken until the 41st round by the St. Louis Cardinals in 2009, but the 21-year-old lefty is looking really good in this, his first taste of full-season ball. He’s won four straight starts to improve to 7-1 with a 1.29 ERA. Siegrist was quite hittable at the NYPL last year, but he’s only yielded 35 hits in 48 2/3 IP so far in the Midwest League. His control has also improved, but he’s not striking out very many, although he did manage six Ks in seven IP in his last start. Siegrist’s 85-to-87 mph fastball suggests he won’t be throwing the ball by many hitters as he rises through the ranks and none of his pitches grade out very well, although his cutter and forkball are his best offerings. Siegrist’s performance so far this season suggests that he could wind up as a big league reliever one day, but we’ll know a lot more once he starts ascending to the higher levels.

By RotoRob
Tags: Cory Vaughn
This entry was posted on Saturday, May 28th, 2011 at 2:14 pm and is filed under BASEBALL, Minor Matters, RotoRob. You can follow any responses to this entry through the RSS 2.0 feed. Both comments and pings are currently closed.