Felix Pie Getting a Chance to Play 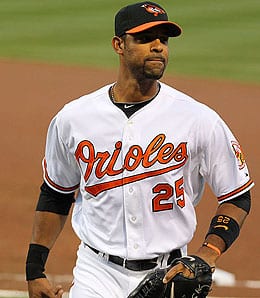 The Baltimore Orioles have won four straight games to pull into a virtual tie with the Jays for fourth place in the AL East. This team is currently just three games out in the loss column and with the Rays scuffling right now, there’s definitely room to move up. The offense kicked it into high gear Wednesday — at least for one inning. The O’s rode an eight-run fourth inning (their biggest inning since June 26, 2009) to a 9-2 win over the Royals.

With all the additions the Orioles made this offseason, Felix Pie hasn’t been Fantasy worthy since last August, however Derrek Lee’s injury has forced Manager Buck Showalter to bring Luke Scott in from the outfield to play first base4, thereby opening some PT for Pie for a little while. Give Pie a look in deeper AL-only leagues if you need a stick as he’s not only starting now but is hitting leadoff for Baltimore. Just be aware that he’s been having some dental problems that could force him to miss a game at some point.

Matt Wieters took an 0-fer on Wednesday, but he did walk and managed to score for the second straight game. He’s been pretty much exactly as we expected – just inside the top 10 at his position, but what happened to that nice power start he had? After swatting four homers with five doubles and driving in 16 runs in April, Wieters has yet to go yard in May and has just three doubles with 10 RBI. Wieters isn’t playing Thursday, but not to worry — it’s just a routine day off.

After the nightmare of his injury-filled 2010 season, we dropped Brian Roberts out of the top 10 among second basemen heading into this year, and so far, we’re thinking we might have been a bit generous with that ranking. Not only has Roberts been rancid this year, but now he’s dealing with a concussion that will leave him in day-to-day mode, until… well, until he’s not. Concussions are very tricky as we’ve seen more often in other sports, so you simply have no idea when the symptoms will dissipate. In shallow (or maybe even standard sized) mixed leagues, it may be time to cut bait on Roberts. Yes, he was a consistent Fantasy stud for many years, but it just seems that when second basemen deteriorate – both from a health and a from an effectiveness standpoint – the process is really, really fast. I’m pretty much convinced that Roberts is now in the midst of that process, which does not bode well for his Fantasy value going forward.

Speaking of Lee (oblique), he was beginning to show a bit of life (six-game hitting streak) before he got hurt a couple of weeks back, and while he’s eligible to come off the DL on June 1, it may take him a bit longer to return. Either way, Lee’s crappy start and subsequent DL stint has made him a difficult asset to hold in anything but AL-only leagues, and we can’t say we blame you.

By RotoRob
This entry was posted on Thursday, May 26th, 2011 at 12:34 pm and is filed under BASEBALL, RotoRob, Team report. You can follow any responses to this entry through the RSS 2.0 feed. You can leave a response, or trackback from your own site.