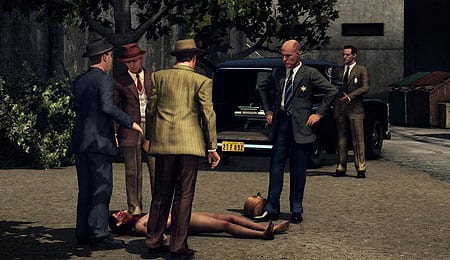 When I looked at the release schedule for 2011, one title in particular stood out to me, Rockstar’s LA Noire. With films like Devil in a Blue Dress, LA Confidential and Chinatown among my all-time favourites, the prospect of becoming a gumshoe in post-WWII Los Angeles was beyond enticing. Some may bemoan its deliberate pacing, but LA Noire offers a wholly unique experience amid a sea of sameness.

Although LA Noire differs from past Rockstar games in many ways, navigating your player and vehicles around is instantly familiar. One notable change is that running, usually done by holding down the “A” button, is now handled via the right trigger. It still fires your weapon as well, but since you can’t actually draw your firearm (it’s done at pre-determined times in cases) it doesn’t really get in the way. However, a couple of movements do feel awkward, most notably trying to turn corners (you always end up making an exaggerated arc) and leaving cover.

Driving pretty much handles identically to the Grand Theft Auto series. The main difference is that the game docks you for causing property damage or flattening John Q. Public as he crosses the street.

We’ve come to expect beautifully rendered, detailed environments from Rockstar, and LA Noire’s recreation of 1940s Los Angeles is no exception. It’s not an open-world game in the sense of Red Dead Redemption or Grand Theft Auto, but that didn’t dissuade the developers from cramming a ton of content into the vast cityscape. It comes at a price on the Xbox 360, though. There are times when textures, and even entire objects, are slow to load, which creates some distracting pop in.

Where LA Noire excels is with the brand new (and eerily lifelike) facial animations. Light years beyond things like lip synching, you’ll recognize the actors used to play in-game parts from real films and shows. Given that the game is largely about your ability to read suspects’ facial cues, it had to be spot on, and almost without exception the game delivers the goods over and over again. It’s a legitimate step forward for gaming and provides unparalleled realism.

As with other Rockstar titles, the voice acting throughout LA Noire is excellent and when combined with all the subtle facial expressions and mannerisms it really brings things to an entirely new level. Music ripped from the era is good, as is most of the original score, but some of the background tunes recycled during crime scene investigations can become a bit grating. Overall, however, it’s another tour de force from the industry’s resident standard bearer on audio excellence.

If, like me, you’ve spent most of your gaming hours on consoles you probably haven’t played a game quite like LA Noire before. You’re not a criminal, a superhero, an Army ranger or an assassin. You’re just a run-of-the-mill patrolman when the curtain raises, and even as the game follows your ascension through the ranks of the Los Angeles Police Department you’ll find the character of Cole Phelps to be a moral beacon in a city full of corruption. It’s a definite departure from the norm.

LA Noire represents a dramatic departure from other Rockstar titles as well, offering a much more streamlined experience. Gone are the seemingly endless side quests and mini games found in previous games, replaced by a focused storyline comprised of 21 largely self-contained cases. There is an overarching storyline that ties things together, but for the most part you’ll be spending your time combing crime scenes for clues, interviewing witnesses and interrogating suspects.

By its very nature, the process of gathering evidence and building a case is a time consuming one, which ensures the pacing of LA Noire won’t be embraced by everyone. As a meticulous gamer myself and someone that likes to proverbially leave no stone unturned when playing through a video game, I found it to be extremely satisfying. Even without guides or videos I was able to locate the vast majority of available clues throughout the game.

Finding clues generally serves one of two purposes, either unlocking a new lead or serving as a means to extract information from witnesses and/or suspects. Each time you interview someone you’re given three choices for how to respond to the information they’ve provided. You can accept it as truth, doubt their statement or accuse them of lying — if you go with the latter you’ll need hard evidence to back up your claim. Correctly identify the statements and you’ll be rewarded with additional dialogue that provides more insight. Choose wrong and that line of questioning concludes.

At the end of each session the game will let you know how many you got correct, at which point you’ll be rewarded with experience points. These help you gain ranks that unlock items like new outfits, hidden vehicle locations and intuition points. Intuition points can be used during investigations to reveal all clues on your mini map or in interrogations to remove an incorrect answer. It’s a smart system that works well most of the time, though there were instances where Phelps leveled an accusation at a suspect that was nowhere near what I was actually thinking and seemed to come completely out of left field.

There are a couple inherent weaknesses with the crime solving in LA Noire, however. First is that you tend to follow the same script from one case to the next in the way things evolve with clues leading to new locations and eventually an interrogation room showdown. Perhaps more damning is that you cannot really screw up a case. Even if you miss crucial bits of evidence, misread all the responses and accuse the wrong person everything still works out in the end.

Despite being a mostly cerebral game, LA Noire does contain some intense action sequences, including shootouts and pursuits (both on foot and vehicular). One of the cooler elements of the pursuits is that they’re not designed to go on indefinitely so even if you can’t run a fleeing vehicle off the road yourself you’re secure in the knowledge that eventually a scripted event will bring the chase to an end.

In addition to the game’s 21 cases there are 40 optional street crimes, which are straightforward calls from dispatch that are primarily action heavy. As a little added incentive to explore the streets of Los Angeles there are also a number of hidden cars to drive, historic landmarks to discover and golden film reels to find.

However, even with those extras there’s little doubt that LA Noire’s longevity and replay value will be viewed as shortcomings by some. I was able to complete the main game along with nearly all of the street crime side missions in roughly 20 hours, and I was extremely thorough. Once you’re done you’ve got the ability to replay cases or enter into free roam and explore the city, but it is debatable how much additional mileage gamers will get out of those options.

LA Noire is a rare bird, placing greater emphasis on your powers of observation than your quick twitch reflexes. It has a handful of missteps, but the character-driven drama is fiercely original and well worth every moment you choose to invest in it.

If the makers of the old Police Quest adventure games had the development engine of Rockstar’s Grand Theft Auto series, you might come out with LA Noire. For better or worse, LA Noire whittles away the typical Rockstar open-world formula for a streamlined experience. Gone are the fetch-quests and random mini-games, such as playing horseshoes in Red Dead Redemption or working out in Grand Theft Auto: San Andreas; instead, the game is focused purely on your detective skills, all done on a case-by-case basis.

This creates a more focused experience, which will appeal to some (like me) and turn others off (like those who enjoy the world more than the story). While driving, shootouts, and chases are still reminiscent of GTA-style gameplay, they stand side-by-side with investigation: adventure-game style dialog trees based on clues and analysis of evidence. The result is a unique experience powered by an incredible new animation engine that captures subtle facial movements unlike any other game, even though we’ve seen better in terms of pure graphics.

The familiar controls can be clunky, much like its Rockstar ancestors. Questionable collision detection during driving sequences creates a bit of frustration during chase scenes, and the lack of a bullet-time marksmanship gimmick a la Red Dead Redemption makes shootouts a hit-and-miss experience — no pun intended. The mission structure is also a little bit clunky, as side missions will come up over your radio when you’re clear across town. Wouldn’t it make more sense if those were triggered when you were closer to them?

In the end, LA Noire is part sandbox game, part action game, and part adventure game. It’s not quite the game-changer the pre-release hype touted it to be (except for its animation technology) but it’s still an ambitious, technically stunning project that will appeal to fanbases of all three of the aforementioned genres. Oh, and if you’re a fan of the TV show Mad Men, you’ll appreciate some of the actors in this game too.

By Herija Green
This entry was posted on Wednesday, May 25th, 2011 at 12:03 pm and is filed under Herija Green, Mike Chen, Video Game Reviews. You can follow any responses to this entry through the RSS 2.0 feed. You can leave a response, or trackback from your own site.