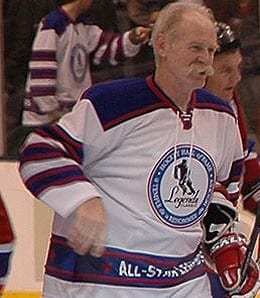 Four lucky winners will watch Game 4 of the Finals with Lanny McDonald!

The Conference Finals are just underway, but already we know that this season’s Stanley Cup Finals will be fascinating, as there will be two new teams competing for the Cup no matter what.

Can Boston rebound from that tough Game One loss at home and make it back to the Finals for the first time since 1990 and have a chance for its first title since 1972? Or will the Lightning, the hottest team left standing, keep striking and get back to the big show with a chance to win its second championship since 2004?

Over in the West, both Vancouver and San Jose are trying to exorcise a lot of recent playoff demons, but only one of these teams will take the next step. And the series looks like it will mirror the last round for both teams — plenty of one-goal nail biters. The Canucks haven’t been to the Finals since 1994 and have never won the Cup; the Sharks, meanwhile, are the only team left that has never made an appearance in the Finals, so they really are trying to swim into uncharted territory.

Regardless of who winds up in the Finals, Scotiabank is offering four lucky hockey fans a chance to see Game Four with former great Lanny McDonald. How cool would that be?

The contest, which kicked off last week, is open only to Canadian residents and can be entered by going to facebook.com/Scotiahockeyclub and clicking the contest link. How easy is that?

Beyond the grand prize, Scotiabank will also hold daily draws for all entrants for various NHL prize packs, so make sure you get your entry in as soon as you can.

By RotoRob
This entry was posted on Monday, May 16th, 2011 at 10:03 am and is filed under Contests, HOCKEY, RotoRob. You can follow any responses to this entry through the RSS 2.0 feed. You can leave a response, or trackback from your own site.