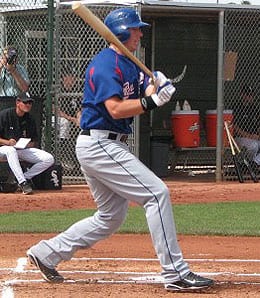 Justin Smoak has become a must-own player for Fantasy owners.

The announcement that Pablo Sandoval will be lost to the Giants for the next 4-to-6 weeks with a fractured hamate bone in his right wrist will have Fantasy owners scrambling this weekend in search of a replacement. Toss in the news that Ryan Zimmerman is undergoing surgery this week for a tear in his abdomen and his stay on the DL will be further extended by 4-to-6 weeks, and the news at the hot corner gets even bleaker. This week our focus will be on corner infielders in an effort to find replacements for those quickly thinning ranks. Without further ado, let’s go find a Kung Fu Panda replacement (and thanks to Sandoval’s new slimmed down figure, we won’t be suggesting the Stay Puft Marshmallow Man as an alternative).

Justin Smoak, 1B, Seattle Mariners (CBS: 63 per cent owned, Yahoo!: 34 per cent): Since returning from the bereavement list April 26 after the death of his father, Smoak has been on a mission. In those five games, he’s slugged two homers and driven in 10 runs. The strikeouts will be there as his strike zone coverage is still in need of some work, but with Smoak hitting behind Ichiro Suzuki and Chone Figgins (who is finally finding his stroke), the RBI opportunities make him a must-own in all formats.

Jack Hannahan, 3B, Cleveland Indians (CBS: 16 per cent owned, Yahoo!: 10 per cent): Hannahan was signed to a minor league deal in the offseason by the Tribe and the journeyman fought his way onto the roster with a great spring. He’s continued his hot start and in 77 at-bats has four homers, 14 RBI and a decent .273 BA. With Cleveland third baseman of the future Lonnie Chisenhall struggling against southpaws at Triple-A (.189 BA), Hannahan could be much more than a stop-gap measure for the surprising first place Indians.

Garrett Jones, 1B/OF, Pittsburgh Pirates (CBS: 29 per cent owned, Yahoo!: 13 per cent): I find it rather surprising that Jones is owned in so few leagues. We’re talking about a player that has both first base and outfield eligibility that is coming off back-to-back 21-homer seasons. So far this season, he’s smacked five homers (albeit for only seven RBI), with two thefts and a .265 BA. Andrew McCutchen will eventually heat up and Jose Tabata already has, which should provide ample RBI opportunities for Jones moving forward.

Wilson Betemit, 3B, Kansas City Royals (CBS: 33 per cent owned, Yahoo!: 16 per cent): The Kansas City infield is currently suffering through the “musical chairs” syndrome with too many bodies and not enough slots. Lost a bit in this shuffling is the great start by Betemit, who has one homer, 13 RBI, 12 runs scored and an outstanding .338 BA through 71 at-bats. It’s a situation that RotoRob identified as an opportunity several weeks ago and if the struggling Kila Ka’aihue (.203 BA) doesn’t find his stroke soon it will only lead to more playing time opportunities for the hot-hitting Betemit.

Danny Valencia, 3B, Minnesota Twins (CBS: 27 per cent owned, Yahoo!: 9 per cent): Like most of the Twins, Valencia is struggling so far this season. He currently has two homers, 13 RBI and a .217 BA. The batting average will rebound and there are no questions about the playing time opportunities, so the relatively low league ownership beckons you to move early and reap the rewards when he does eventually heat up.

Brett Wallace, 1B, Houston Astros (CBS: 48 per cent owned, Yahoo!: 19 per cent): It seems that the well-travelled Wallace has finally found a home in Houston. So far he has one homer, nine RBI, 15 runs, and is 33-for-85, good for an amazing .388 BA. If the slumping Carlos Lee can find a way to get on base it would certainly be a big help for Wallace and his RBI numbers.

Todd Helton, 1B, Colorado Rockies (CBS: 23 per cent owned, Yahoo!: 10 per cent): The 37-year-old is off to one of his best starts in years. In 70 AB, Helton has three homers, 10 RBI, and a .300 BA and makes for a solid corner infield option in all formats. Just temper your expectations as his cranky back is virtually certain to send him to the sidelines at some point this season.

Alex Cobb, SP, Tampa Bay Rays (CBS: 2 per cent owned, Yahoo!: 0 per cent): The Rays have sent closer of the future Jake McGee back to the farm and called up 23-year-old Cobb. In 22 IP at Triple-A Durham, Cobb has been truly outstanding with 29 strikeouts, a 2.05 ERA, and a 3-0 won-loss record. He is starting Sunday against the Angels so we’ll get a first hand look at just another of the many great young starters in the Rays’ organization.

Chase Headley, 3B, San Diego Padres (CBS: 54 per cent owned, Yahoo!: 17 per cent): Headley has been dealing with a serious case of the flu for a couple weeks, something that has caused his numbers to drop drastically. In deeper leagues, the mid-teen power potential and BA can provide at least temporary relief.

Alex White, SP, Cleveland Indians (CBS: 18 per cent owned, Yahoo!: 0 per cent): On Saturday, the Tribe called up top prospect White, 22, to replace the injured Carlos Carrasco and the kid responded with a credible performance, going six innings in a no-decision against the Tigers. This could be a rather short visit for White, but find a home for him in AL-only leagues until we get a bit better idea about how long Carrasco will be out.

Joel Pineiro, SP, Los Angeles Angels (CBS: 20 per cent owned, Yahoo!: 5 per cent): It looks like the shoulder stiffness that forced Pineiro to the DL to start the 2011 campaign is well behind him. He returned to the Halos’ rotation Saturday with a vengeance, tossing seven strong innings against the Rays, allowing four hits, one walk and one earned run while striking out three. Expect more of the same solid results moving forward.

Vance Worley, SP, Philadelphia Phillies (CBS: 4 per cent owned, Yahoo!: 1 per cent): The injury that forced Joe Blanton to the DL opened the door for Worley, a 23-year-old right-hander. The youngster picked up the win over the Mets Friday in his debut with six strong innings, and with the Nationals next on the agenda he’s a solid option in both NL-only and H2H formats this week.

Trayvon Robinson, OF, Los Angeles Dodgers (CBS: 2 per cent owned, Yahoo!: NA): Recently recalled outfielder Jerry Sands is continuing to struggle (he has yet to get to the Mendoza line through 42 at-bats). Meanwhile, at Triple-A Albuquerque, Robinson is tearing the cover off the ball, amassing four homers, 19 RBI, and two thefts to go along with a stellar .342 BA. The Dodgers do have some outfield options, don’t they?

Will Venable, OF, San Diego Padres (CBS: 18 per cent owned, Yahoo!: 4 per cent): In the past week Venable is starting to find his stroke and back hitting in the lead-off slot for the Padres. If you’re looking to boost your speed numbers, Venable’s 25-to-30 stolen base potential is nothing to sneeze at.

Clint Barmes, 2B/SS, Houston Astros (CBS: 12 per cent owned, Yahoo!: 2 per cent): Barmes was activated from the DL Friday after missing the entire start of the season with a broken hand. The days of the 20-home run power are probably behind him but a player with multi-position eligibility that could reach mid-teen homers and swipe five or 10 bases is an intriguing option at middle-infield.

Jonny Venters, RP, Atlanta Braves (CBS: 27 per cent owned, Yahoo!: 50 per cent): Craig Kimbrell has looked very human lately and Venters has looked exactly like what we expected. An ERA and WHIP under 1.00 has Venters in a position to garner save opportunities should Kimbrell continue to struggle, and that makes him a must-own in all formats.

Vicente Padilla, RP, Los Angeles Dodgers (CBS: 8 per cent owned, Yahoo!: 7 per cent): Jonathan Broxton is hanging onto his job by a thread. Hong-Chih Kuo is on the DL dealing with back issues. Manager Don Mattingly has reiterated that Broxton is his go-to guy, but for how long? Padilla garnered a save Wednesday against the Marlins and based on Broxton’s results, Padilla could be on the verge of more save opportunities in Dodgertown.

By Tim McLeod
This entry was posted on Sunday, May 1st, 2011 at 2:56 pm and is filed under BASEBALL, The Wire Troll, Tim McLeod. You can follow any responses to this entry through the RSS 2.0 feed. Both comments and pings are currently closed.