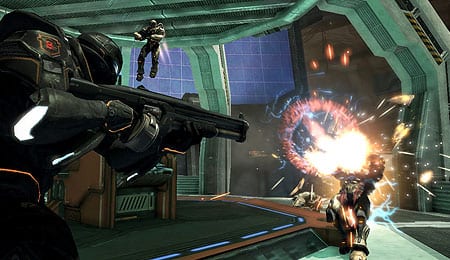 There’s no doubt Prejudice provides a lot of BANG for your buck… tee hee.

With juggernauts like Call of Duty and Halo: Reach ruling the online roost, it has become exceptionally difficult for newcomers, even ones supported by major publishers, to make a significant dent. For those with less substantial financial backing the route de jour has been to undercut on price to gain market share. Games like Blacklight: Tango Down, Modern Combat: Domination and Breach have all tried their hand at this method, but none of them have offered up as comprehensive a package as TimeGate Studios’ Section 8: Prejudice.

Although the game features a typical first-person shooter setup, there are some hiccups — both on foot and in vehicles — which hold it back. Running and gunning should feel instantly familiar, but I don’t care for jumping/jetpacking being mapped to the same button, especially when it’s the left bumper. Saving “A” to interact with objects seems unnecessary when practically every shooter uses it to jump. It just feels counterintuitive.

Of the three vehicles, the bike performs the best, though you won’t be mistaking it for a Ghost anytime soon. The tank definitely handles better than it did in the original. Unfortunately, that’s not saying much. It’s still too clunky and makes a pretty easy target for your enemies. Like the tank, the mech suit feels slow and cumbersome.

Considering the series’ roots as a retail game, it’s no surprise that Section 8: Prejudice sports some pretty impressive visuals for a downloadable title. The campaign/multiplayer locations look sharp even if they play out like the “best of” with the obligatory snow map and a mountainous setting that looks a lot like the opening level of Reach. It never hurts to have everyone fighting in sweet looking robotic suits, either, which have a very cool (if somewhat familiar) design.

However, quality graphics give way to an underwhelming audio performance. Background music is forgettable, and the voice acting in the campaign is passable at best. There are some cool moments, like the sounds as you rapidly descend toward the ground with anti-aircraft fire booming nearby, but they are the exception rather than the rule. The constant female voice announcing points being hacked or that your shields are down gets old quickly.

In the original Section 8, campaign mode was a fancy way of saying “tutorial.” It was exceedingly light on story and didn’t offer much more than a series of objectives that you were required to complete before moving on to the next one. This time around, TimeGate Studios has attempted to put a little more meat on the bone, offering up an eight-chapter story that should take around 4-to-5 hours to complete on the default difficulty setting.

The story is pretty much paint by numbers — your predecessors were cast aside by the government and now want to exact revenge by striking at the colonies they once helped establish — and never attempts to carve out any back story, but there’s enough there to keep you pressing onward. You once again play as Alex Corde, a generic bad ass that follows orders or people die, and along with a few squad members you must track down the men behind this shadowy threat.

Even with a cursory focus on the story, the campaign still uses the same massive areas as the multiplayer, which means there are only a handful of set pieces. This leaves you to sprint and jetpack around, mowing down hapless foes until the later stages when a new enemy emerges that looks exactly like the old ones but carries a different title and is approximately 527 times more difficult to kill. Not because it’s more elusive or utilizes better tactics, it’s simply capable of absorbing a ton of punishment.

Like most shooters, though, the multiplayer is the featured attraction. There is only one adversarial mode available (Conquest), but from within it you’ll be given multiple objectives to complete during each match. At its best this creates a controlled chaos as 16-member teams race from capture points to firefights to intercepting enemy convoys. When everyone is scrambling to complete objectives, it’s a lot of fun.

One side effect of this structure that most gamers should appreciate is that by spreading the action over huge maps, allowing you to select your spawn point and changing the focal points, it has effectively eliminated camping. Kill/Death ratios just aren’t very important in the race to reach 1,000 points, which instead puts the focus squarely on completing objectives. It’s a refreshing change.

As you accomplish goals and defeat enemies you’ll earn money, which can then be spent to buy items like turrets, supply depots and vehicles. You’ll also earn experience points along the way to unlock new weapons, abilities and ammo types. A set of attributes can be tweaked to suit different play styles, though to be honest I didn’t notice much difference regardless of how I distributed my points.

Beyond the 32-player Conquest Mode, TimeGate Studios has added Swarm, where you and up to three other gamers (bots will fill in any missing slots) will face waves of enemies in an attempt to hold onto a control point. These scenarios are more intense as a dramatically reduced map area keeps the action hot and heavy. While not the most original addition, it’s still a welcome one.

There are a couple issues that can hinder the fun, most notably in Conquest Mode when A.A. turrets cover the majority of the map, forcing you to drop into small pockets and then sprint to wherever the action is currently taking place. It’s in these instances that the map’s size works against it.

Of more concern is that as of this writing the game is rife with freezing. I’ve had roughly 10 games completely lock up my Xbox 360 since launch and a trip to any forum board will turn up plenty of others experiencing the same issue. I have no doubt TimeGate will eventually fix the issue, but it casts a shadow over things for the time being.

At 1,200 MS Points (US$15), Section 8: Prejudice has to be graded on a curve as the price makes it much easier to forgive the game’s shortcomings. It’s the best of the recent wave of downloadable shooters and a solid change-of-pace, particularly for cost-conscious gamers.

By Herija Green
This entry was posted on Friday, April 22nd, 2011 at 2:40 pm and is filed under Herija Green, Video Game Reviews. You can follow any responses to this entry through the RSS 2.0 feed. You can skip to the end and leave a response. Pinging is currently not allowed.