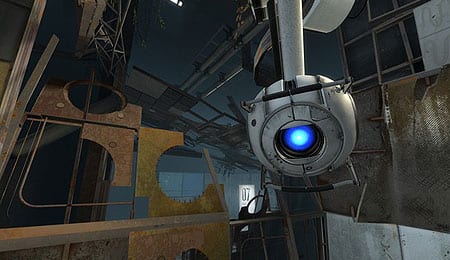 Wheatley is one of the funniest characters in video game history.

Originally sold as part of The Orange Box compilation, Portal carved out a sizable following thanks to some innovative gameplay, devilishly clever puzzles and dark humour. Nearly four years later, Valve has created a proper sequel with the release of Portal 2. Turning a relatively short title into a full-fledged retail release without losing its uniqueness would seem like a daunting test, but it’s one that Valve has handled deftly.

As in the original, the left/right triggers are used to fire the two different portals. Your character can also jump (A) and interact with objects (X), but that’s it for single player. In multiplayer you’ll have access to more commands, including a countdown clock, some rudimentary emotions accessed with the d-pad and a function that paints a target so that your partner knows where to look or fire their portal. It’s simple and effectively done.

In terms of raw visuals, there are unquestionably better looking games out there, but where Portal 2 excels is in the level of detail that’s squeezed into each section. From the opening moments when the facility is crumbling in front of your eyes to later chapters, when the setting changes from cramped testing chambers to vast underground caverns, it all feels fantastic yet somehow plausible. In particular, the sense of scale really comes across well.

Even had the graphics been truly cutting edge, they’d have still taken a backseat to the voice work of Stephen Merchant, J.K. Simmons and Ellen McLain. That trio injects an incredible amount of personality into a pair of robots and a PA system, adding so much to the overall appeal of the game. I knew it was something special when my wife, a complete non-gamer, sat down and not only watched me play for over an hour, but even demanded I reload a section after I’d talked over some dialogue!

As good as the performances are, they wouldn’t mean as much if the writing wasn’t right there stride for stride. Thankfully, the script is pure genius. The interplay between Wheatley (Merchant) and GLaDOS (McLain) is hilarious with tons of great one-liners. Simmons, channeling J. Jonah Jameson from the Spider-Man films, does a great job carrying his segments as well. Add a strong soundtrack and you simply can’t do audio much better than this.

Portal 2 picks up after the events of the original, once again casting you as Chell, the silent protagonist seen (at least if you arranged your portals correctly) in the first one. After a brief introduction you are awoken by an alarm and immediately introduced to Wheatley, a delightfully dimwitted personality sphere that has come to guide you to safety. Things predictably don’t go as planned and soon enough you’ll find yourself fighting for your life in a decidedly unconventional manner.

For the uninitiated, Portal 2 is a first-person puzzler with some platforming elements sprinkled in. Throughout the game you’ll need to navigate various rooms constructed specifically to test your problem-solving abilities as well as some less structured “real world” puzzles. To do this you’ll make use of your trusty portal gun, which creates two openings (an “entrance” and an “exit”), allowing you to travel between them to advance.

Along the way you’ll be introduced to plenty of different wrinkles. Obstacles such as barriers that destroy existing portals, moats that kill you if you fall into them and turrets looking to fill your body full of bullets are out to make your life tough. The game also mixes and matches a number of different puzzle items like pressure sensitive switches, light bridges and even a series of gels with special properties to keep things varied and challenging. It’s the same core experience as Portal, only much more refined.

With the sequel being a standalone title there needed to be an increased focus on the storytelling aspects, which is handled nicely. Although you’ll only interact with a handful of characters, they’re so well constructed that you’ll never feel like the world is under-populated. The game’s wonderful sense of humour is another key factor in its success. In fact, it’s so entertaining that when dialogue would begin I’d immediately stop until I was sure they were done speaking lest I miss anything.

And then, of course, there are the puzzles themselves. I’ve already noted some of the items used to create these brainteasers, but it’s the construction and setup that really makes them stand out. While the general rule of thumb would be to expect an escalating difficulty level throughout, the reality is each person’s experience will be different since the answer is always right in front of you waiting for you to uncover it. What stumps one person might be solved in moments by another (and vice versa).

Fans of the original will no doubt notice that some of the “skill” has been removed from the equation. By this I mean you don’t necessarily need sharp reflexes or impeccable timing on your jumps to advance through the game. The challenge now comes in figuring out what needs to be done, not the actual doing. I’m sure some hardcore gamers will bemoan the “dumbing down” of another franchise in the interest of attracting a broader following, but I think it was a smart move that prevents the game from grinding to a halt or becoming overly frustrating.

Since the solving of puzzles is such a subjective thing, it’s hard to put an exact run time on the single-player story. If you avoid message forums and YouTube clips — and believe me, it’s so much more satisfying to grind it out until the light bulb comes on — I’d guess you’ll check in somewhere around seven or eight hours.

There’s also a co-operative campaign that can be played online or via local split screen. Here you’ll be introduced to Atlas and P-Body, two robots equipped with portal guns and assembled to run GLaDOS’ gauntlet of tests. Although it doesn’t benefit from the same depth of storytelling as the single player, it’s still loaded with plenty of humour courtesy of GLaDOS’ clear disdain for both robots.

Adding a third and fourth portal (two per gun) allowed Valve to pull out all the stops as the co-op story is completely unique with different puzzles to solve, successfully forcing communication, interaction and collective brainstorming. Freelancing gets you nowhere here, which means it’s more fun to go through the experience with somebody you know rather than trying to work it out with a stranger. Although it’s not as long, the co-op side presents the best puzzles.

My lone concern with Portal 2 is its replay value. There are no standalone tests to run, and, with the exception of a couple of achievements, no challenges to do things such as finish under a certain time or create a limited number of portals. It’s the inherent drawback of placing all the focus on figuring out the solution — once you’ve solved something it stays solved.

A fantastic game that seamlessly blends so many unique elements together to create a legitimately memorable experience, Portal 2 is an absolute must own. We’ve still got eight full months left in 2011, but I guarantee you this will be a finalist for Game of the Year.