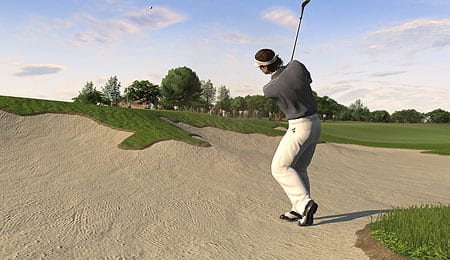 The courses in Tiger Woods PGA Tour ’12 are very detailed.

Even the most casual golf fans know that one PGA tournament stands above all others in terms of tradition, history and prestige: The Masters. Prior to this year, EA Sports had never included it in its annual Tiger Woods PGA Tour franchise, but now that it’s got it it is building the entire experience around gamers donning their very own virtual green jacket.

Nearly all the in-game action is controlled with the left analog stick (you do have the option to transfer it to the right stick) as you push down to start your swing and up to follow through. The amount of power is dependent on how far and long you pull it back, while the flight of the ball is affected by how straight you keep the stick. It sounds basic, but it takes a while to get the hang of, particularly when it’s time to knock down putts from further than a few feet. Setting up your shots is done with a combination of the bumpers, triggers, analog sticks and d-pad all playing a part.

With just one important character model on the screen at a time, EA Sports is free to invest most of its efforts into making the golf courses look fantastic. For the most part it succeeds, particularly with the fabled Augusta National. Newly rendered grass gives a more realistic feel (it even sways in the wind) and weather can tangibly change the way a course plays — it’s cool to play a couple rounds in a downpour, then watch it clear up but still have the ball slogging through wet grass. Golfers look good, display subtle (and more demonstrative) emotions and are animated smoothly.

It just wouldn’t be The Masters without Jim Nantz, and the decision to bring the sport’s most recognizable voice on board was a great one. He and colour man David Feherty do a strong job of recreating a broadcast feel, though they could use more emotion in big spots. Sound effects and music are nicely done. I really enjoy the building crescendo as a long putt zeroes in on the hole. The pitying moan when I miss for the umpteenth time? Not so much!

Adding The Masters provided EA Sports with the impetus to completely rework the career mode. Now called Road to the Masters, the PGA’s signature event gives you a clear goal from the moment you create your golfer, something that isn’t as easily achieved in golf as it is in sports like baseball or football. You’ll start out in the amateur ranks before transitioning to the Nationwide Tour. Perform well enough there and you’re on to Q School where a top-25 finish will earn you a spot on the PGA Tour.

Reaching the PGA Tour is where things really start to get interesting as you’ll begin at the very bottom, meaning you’ll need to fight and claw your way up as only the top 100 ranked players get invited to the sport’s major tournaments, including Augusta National.

If you expect to compete at that level you’ll need to improve your golfer’s default skills dramatically. This is done with experience points, which are earned every time you set foot on the course. Some bonuses pop during the rounds — from things like keeping your drive on the fairway or sinking birdies — while others are earned based on the entire 18 holes (score under par, putt fewer than X times). It’s a good system that ensures your character is progressing as a golfer whether you’re finishing first or 50th.

Full blown tournaments aren’t the only way to earn experience, either, as there are also training and sponsor challenges to take part in prior to the main event. For example, you might go one-on-one in a skins game where each hole played is worth a set number of points. A sponsor may ask you to drive balls a combined distance or play through all of a course’s Par-5 holes and finish under par. Each event nets you more experience, and sponsor challenges give you access to new gear that can provide attribute boosts to your power, accuracy and more.

There are 16 courses (six new) included with the game and 20 more available via download. Now what’s interesting about this setup is that DLC courses will come up during career mode, giving you the option to either skip them and incur a small hit in your ranking or pony up the money. EA Sports says the DLC was included to reward those that buy it with the opportunity to play it during their career instead of making it only accessible in “Play Now” mode. Of course, given how much of a hot button issue launch day DLC is there is certain to be some level of backlash toward this.

Beyond the primary career mode, Tiger Woods PGA Tour ’12: The Masters also includes a pair of Masters-themed secondary offerings: Tiger at The Masters and Masters Moments. The former puts you in Tiger Woods’ cleats and challenges you to match (or surpass) Tiger’s performances during his four wins at Augusta National. The latter gives you the chance to play some of the course’s most historical moments. It even offers up some nice rewards for completing them.

The game also features one significant change to the actual on-course action as a caddie has now been added to help you plan your strategy on each shot. In reality, the caddie is a glorified help system that makes the game more accessible to newcomers by doing the work of determining which shot(s) works best and leaving you to simply execute it.

Lest anyone think this removes all challenge from the game, the caddie is hardly infallible. In fact, your caddie’s abilities improve along with your own. Completing course challenges allows you to “master” the course. There are three levels of mastery (bronze, silver and gold) and each time you reach one your caddie will understand the course better and make improved recommendations. You’re free to turn it off, and you’ll often be able to customize better shots if you want to take the time to line them up. However, it’s nice to know there’s a capable option readily available if you don’t.

Whichever route you choose with the caddie, Tiger Woods PGA Tour ’12 does an excellent job simulating the intricacies and strategy of golf. Things like reading a lie and compensating for weather conditions are issues you’ll need to deal with if you’re going to succeed on anything but the lowest difficulty setting. It can seem overwhelming, and newcomers to the series should expect some frustrations (especially when putting), but when it starts to click it can be one of the more rewarding sports gaming experiences out there.

If you’ve ever thought about taking the plunge with a Tiger Woods PGA Tour title this is the year to do it. The inclusion of The Masters gives a welcomed focus to the career mode, and the new caddie feature makes it more newcomer friendly than ever.

By Herija Green
This entry was posted on Monday, April 4th, 2011 at 4:57 pm and is filed under Herija Green, Video Game Reviews. You can follow any responses to this entry through the RSS 2.0 feed. You can skip to the end and leave a response. Pinging is currently not allowed.