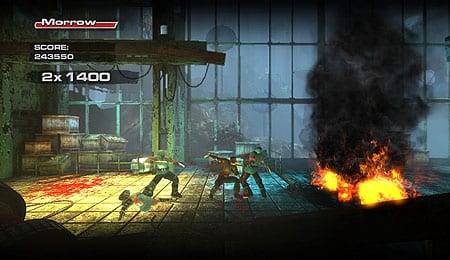 That’s not a knife… that’s a knife!

When I was a kid, the local pizza place had a pair of old standup video game consoles in the ordering area. One was Gyruss; the other was Rush N’ Attack. I can still remember “liberating” quarters from my parents’ change jar so that my friend and I could take turns playing Rush N’ Attack for hours. That status as a childhood favourite made me excited for Konami’s recent retro reboot, Rush N’ Attack Ex-Patriot. The question is: was that excitement misplaced?

Like the original, Ex-Patriot is built around knife combat. Your attacks are split into light (X) and heavy (Y), and as you kill enemies, you’ll unlock additional combos based off those two commands. You also have temporary access to guns you pick up and several different explosives — you cycle through them with the right bumper and throw them with the right trigger.

Combat is fairly mundane, though on the harder difficulties you’ll need to utilize your block (left trigger) to survive. There are also some platforming sections. This is where the game stumbles as jumping is too loose and imprecise, particularly when landing on an object floating in liquid. I shudder to think how many times I landed on a box only to abruptly tumble to my death.

It’s hard to look at this game and not think of Capcom’s Bionic Commando Re-Armed titles as there are some not-so-subtle similarities. Levels and characters look fairly good and animations are smooth, including several cool stealth assassinations. While most of the graphical missteps occur during non-gameplay segments, there is one notable exception. Sections that require you to wear a gas mask feature a reduced field of vision with the remaining visible area fogging up. Conceptually it might have sounded like a cool idea. In practice, though, it’s annoying.

And then there are the cut scenes. Getting up close and personal with the in-game graphic engine reveals truly ugly textures and awkward pantomiming that precedes word balloons of text that supply the dialogue. Combine that with the weird opening and closing animations and you’ve got some bad storytelling elements in place.

There isn’t a lot going on with Ex-Patriot’s audio side. The only things that really stand out are the repeating Russian transmissions on Stage 1 and occasional snippets of shaky voice acting. Amid a forgettable collection of music and sound effects, nostalgia buffs should at least get a kick out of the recycled alarm sound from the original.

The plot in Ex-Patriot is vintage “Red Scare” stuff with a militarized Russian faction having gained control of a previously unknown element called Ulyssium, which when weaponized makes today’s nuclear weapons look like cap guns. You and your team are sent in to investigate. The Russians prove craftier than Uncle Sam imagined, however, and everyone is captured.

From there, the game opens with a prisoner springing you from your jail cell and leaving behind what appears to be the same knife Paul Hogan used in Crocodile Dundee. With the rest of your squad still imprisoned it’s up to you to spring them and complete the mission before this rogue Russian sect has the chance to launch their uber missile at the United States.

Much like the original, Ex-Patriot is primarily a side-scrolling 2D beat stab ’em-up. Combat is slightly more evolved this time around, however — most notably enemies blocking your attacks and a collection of hiding places in the 2.5D environment to perform stealth kills. Easily the biggest departure is the addition of platforming sections. These can best be described as a poor man’s Shadow Complex as you spring back and forth across elevator shafts and over environmental hazards.

As noted, though, the jumping controls just aren’t that precise. That makes the platforming sections a chore. In Shadow Complex everything was so responsive it became about making your jumps look cool because functional leaps were all but guaranteed to succeed. Here you never quite feel like you’re in control, and you’re just hoping to make it across in one piece.

Rush N’ Attack Ex-Patriot consists of three stages, each punctuated with a boss fight. There are some elements lifted from the classic version (dogs, flame throwers and rocket launchers, land mines) that make for some fun moments, but even with that the levels are largely underwhelming. That’s because the objectives recycle liberally. Go here, find a switch, gain access to a new area, rinse and repeat.

All told you can expect to spend around five hours completing the campaign. There’s not a ton to do once you’re finished outside of replaying it on another difficulty setting, tracking down all the hidden pieces of Ulyssium or trying to post a high score on the leaderboards.

Maybe I’m an easy mark because of my feelings for the original, but I genuinely enjoyed most of my time with Rush N’ Attack Ex-Patriot. The pacing is good, assassinating enemy soldiers is fun and you get a pretty decent chunk of gaming for 800 MS points (US$10).

By Herija Green
This entry was posted on Tuesday, April 5th, 2011 at 12:58 pm and is filed under Herija Green, Video Game Reviews. You can follow any responses to this entry through the RSS 2.0 feed. You can leave a response, or trackback from your own site.