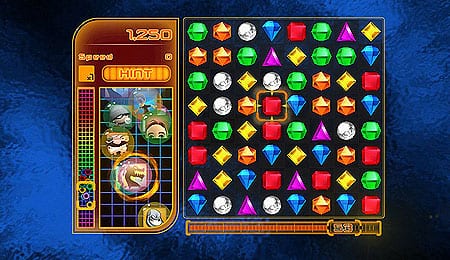 When the clock starts winding down it can get pretty hectic.

Microsoft’s Xbox Live Arcade House Party moves into Week 2 with the release of Bejeweled Blitz Live, the latest spinoff from PopCap Games. We know the formula, so all that’s left to ask is does it bring enough new stuff to the table to warrant an 800-point investment?

You navigate the board with the left analog stick and move/rotate gems in the direction of the corresponding face button. For example, if you want to move a gem one space left you’d press the “X” button. To move it down you’d hit “A” and so on. If you find yourself stuck you can press the right bumper to reveal a hint.

The graphics for Bejeweled Blitz Live are fine for what it is. The gems are bright and colourful with cool visual effects (like explosions and bolts of lightning) accompanying more intricate matches. Electronic tunes play in the background, blending nicely without getting stale. The computerized voice that counts down each round gets a little grating after a while, though it’s a necessary evil to keep you aware of the time remaining.

Unless you’ve completely avoided casual gaming with zealot-like enthusiasm, you’re already familiar with Bejeweled — for both of you that aren’t, the concept is simple. Gems of different colours and shapes are arranged on an 8×8 grid, and it’s up to you to shift them one slot to create matches of three (or more). Do that and the gems disappear, allowing a new set to fall, thus filling in the gap.

This basic formula is repackaged in Bejeweled Blitz Live to include two game modes: classic and twist. Classic mode has you creating matches exactly how I just described above while twist behaves more similarly to Hexic. Here you’ll control a circle enveloping four gems, which you are then able to rotate either clockwise or counterclockwise to create the same matches. Despite the identical goal, the two ways to go about reaching them feel markedly different.

The other change is that each game lasts only 60 seconds, meaning the pressure to find matches and score points is constantly on. You can take a reactionary approach and still have fun, but you’ve got to scan the board quickly and think multiple moves ahead to really excel (you’ll also need a bit of luck). The faster you match gems the more your multiplier builds, allowing you to score a significant amount of points without the benefit of flame/lightning gems or hypercubes (created by matching more than three gems or matching them in a specific configuration).

Playing the game solo is a good way to practice or kill a few minutes, but the focus here is on battling other gamers. To that end, Bejeweled Blitz Live offers head-to-head matches (both online and offline) along with Xbox Live Party Mode. The latter allows up to 16 players to compete in what is essentially a free-for-all. You only see your own screen and are kept up to speed on everyone else via a side bar that shows what looks similar to a cribbage board. On it are floating bubbles with everyone’s gamerpics inside, and it’s these that indicate where people are ranked in relation to each other.

While adding a slight variant on the match-three formula with Twist Mode and limiting each match to one minute aren’t revolutionary, they do freshen things up a bit. If you’re a fan of the original or are just looking for some casual gaming fare, Bejeweled Blitz Live is worth downloading.