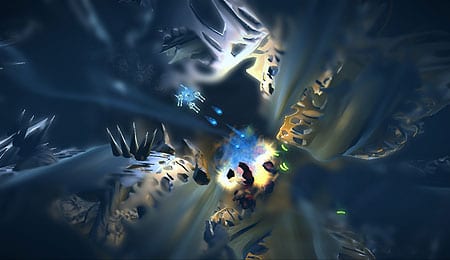 Movie buffs might recall a late-’80s action-comedy called Innerspace, which saw Dennis Quaid get miniaturized and injected into the body of hypochondriac Martin Short — I’ll give all of you a moment to add that to you Netflix queue… still waiting… and we’re back. Well, subtract the comedy and add a bunch of bad ass weaponry and you’ve got the basic premise of Microbot, a twin-stick shooter from developer Naked Sky Entertainment that takes place entirely within a human body.

Like all twin-stick shooters, you’ll move with the left analog stick and aim/fire with the right. The face buttons are not used, but the triggers deploy your auxiliary weapons (such as a harpoon or a nuke) and the shoulder buttons bring up your map. Despite these simple mechanics, the fact that your ship ebbs and flows in viscous fluids rather than calm space leads to some frustrating moments.

The graphics in Microbot aren’t going to turn any heads, but each of the five parts of the body you visit look unique and the entirety of the game sports a cool floating effect to it — the way ships drift around really does a nice job of creating that illusion of a constant tide. Enemies are simple yet effective, and the primary ship changes its appearance based on your selected equipment. Things are also quite colourful, including enemy fire, which makes it easy to spot.

I really liked the smooth, relaxed soundtrack that plays during the majority of the game. It fits extremely well with the constant movement on screen. The game’s sound effects don’t pack much of a punch, though, which is disappointing in a shooter.

Your adventure begins inside a hypodermic needle where you’re summarily injected into a host. As an advanced microscopic robot (or Microbot) your task is to locate and destroy all the infections created by previously injected robots, which have somehow turned on their host.

That basic setup paves the way for you to control your customizable prototype through five different areas of the body, each of which contains four sections for a total of 20 levels. Of that number, five consist exclusively of a single boss fight. The five areas all look quite diverse, and you’ll encounter different and increasingly dangerous adversaries as you proceed, so the game never overstays its welcome in one spot or with one particular foe.

When you begin you’ll be underpowered with only three available slots to equip basic weapons and propulsion. Clearing levels opens up more slots, and you’ll eventually have seven primary options along with a pair of auxiliary selections at your disposal. With numerous guns, motors and defensive items available, Microbot offers a lot of flexibility when it comes to mixing and matching. I chose to go in heavy (six guns, one motor), but you can add more motors for superior maneuverability, equip shields for better defense or even go with items that allow you to collect more atoms.

Atoms are the in-game currency, and they’re found by destroying both enemies and benign cells. These are then used to upgrade the equipment you’ve collected. Some enemies also drop schematics, which unlock items like guns, shields and more. It’s a smart idea that pushes you to replay levels as only ships that use the actual item will drop the needed plans. Each level also contains a hidden Bucky Ball that is usually found off the main path, encouraging additional exploration.

Ultimately, though, how much you enjoy this game will come down to whether you can accept that your ship is going to get pushed around by the current, at times into incoming enemy fire. It bugged me a bit at first, but I quickly acclimated and found it to be an interesting twist on an established formula. Your mileage may vary. Either you choose to go with the flow (yep, that’s a pun) and adjust accordingly, or you’ll be in for some frustrating times.

Even though I enjoyed the combat, there were a few drawbacks. First, Microbot isn’t a long game and many battles can by bypassed entirely. Now I’m all for options, but I’m not sure fleeing should be such a readily available one in a twin-stick shooter. Second, co-op is local only and any guest joining your game is stuck with a stock loadout, making them almost useless in later stages. Lastly, the boss fights just aren’t very good or challenging. In fact, I only died a grand total of once against the final four bosses combined.

Microbot is a different take on the twin-stick shooter, one that’s inherently imprecise controls will doubtless be endearing to some and maddening to others. It’s got a cool vibe and loads of customization options, but if you cannot embrace the floaty controls then you probably shouldn’t bother.