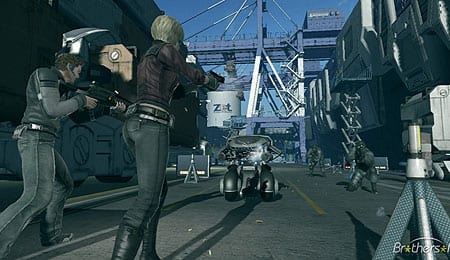 With established shooter franchises dominating the marketplace, it’s becoming tougher and tougher for newcomers to break in. Thus it’s not surprising that developer feelplus unveiled a couple unique concepts in Mindjack to differentiate itself. Its innovations: mind controlling NPCs and a persistent online component where players can “hack” into each other’s games at will. In the process of creating something original, however, some critical elements fell by the wayside.

If you’ve played Gears of War you should have a pretty good feel for the basics as the “A” button snaps you in and out of cover as well as executing a version of the roadie run. Aiming, firing and reloading are also identical. Despite that familiarity, none of those elements are as tight or precise as their Gears of War counterparts. Melee attacks are also available, though it’s incredibly temperamental and trying to pull one off is a good way to end up dead.

Where Mindjack branches out is with your ability to exit your own mind and hack into that of any citizen or mind slaved enemy. To enter “Wanderer Mode” you simply click down on both analog sticks and become what looks like a digitized cloud. From there you seek out a willing host, aim and pull the right trigger to take over their mind. It’s functional, but could’ve been better with more speed — and why exactly do I need to take the stairs as an apparition?

If I were asked to describe the visuals in Mindjack in a single word it would be: meh. There’s nothing truly unsightly or distractingly bad. It’s just that nothing stands out. You travel to a handful of different locations throughout a city, and yet no matter where they’re supposed to be, you end up fighting behind the same bits of cover in fairly tight quarters. Yes, this is a cover-based shooter, but you can find clever and organic ways to implement that into the gameplay (just look at Uncharted or Gears of War). That has not been done here.

Enemy variety is largely nonexistent. In fact, if memory serves, you fight exactly one unmasked individual in the entire game. At all other times it’s a continuous stream of basic troops, heavily armoured soldiers and mechs of various sizes. The main characters look okay during gameplay, but in cut scenes they fail to convey any emotion and the lip synching is off.

Repetitive techno music and brutal voice acting drag down the audio side. Jim Corbijn and Rebecca Weiss, the game’s protagonists, have their lines delivered with the same enthusiasm you’d find out of a toddler being fed a plate of cauliflower. Granted, the cheesy dialogue (“You’re discontinued”) doesn’t do them any favours, but it’s still a pretty uninspired performance.

Set in the year 2031, Mindjack takes place as governments around the globe are crumbling, giving rise to all-powerful conglomerates. Of course, “Sci-Fi Plots 101” dictates that any privatized company ascending to power must be evil, and technology broker Nerkas Solutions is no different. As Agent Jim Corbijn of the Federal Intelligence Agency (FIA) you are sent to keep an eye on Rebecca Weiss. Things go south quickly and now the two of you must team up to fight through waves of enemies and uncover the deadly secret NERKAS is guarding. If all that sounds cliché, it’s because it is.

Needless to say, Mindjack won’t win many points for its story, which is told through a mixture of poorly voiced cut scenes and strange hazy flashbacks. The game tries to keep you off balance a couple times by throwing in some twists, however with characters as two-dimensional as these you probably won’t care much.

In between the story elements you’ll engage in a series of firefights, each of which is self contained to allow for the “always online” structure. The actual gunplay isn’t anything exceptional, but it’s solid enough. You’ll use a handful of different weapons from pistols to rocket launchers to dispatch enemies, and if you’re quick enough after you’ve downed them you can enslave fallen foes. This has a dual purpose. Left to their own devices, the NPCs will now fight on your behalf. However, they also become willing vessels for your mind hacks — this is important as if you take too much damage, your mind will be kicked out of your body, forcing you to find a temporary replacement.

While the shooting/hacking elements generally work well, the set up to the game’s battles is pretty repetitive. You’ll fight the same enemies in slight variations of the same locations, meaning tactics rarely change throughout. There are quite a few “boss fights,” but these fail to deliver. Sometimes airships will float overhead and fire sporadically before leaving once all the ground troops have all been dispatched, ending the fight. Others require you to destroy them to advance. The lack of clear direction in these battles is a real shortcoming, particularly when you go toe-to-toe with the giant mech.

Enemy and friendly A.I. is also sub-par. Opposing foot soldiers will wander out into the open at a snail’s pace, turning themselves into willing bullet sponges in the process. Their aim is pretty good, but they rarely press the advantage when they have you trapped. Also, the worst part about mind hacking is that the same shaky A.I. takes control of you. There are few things more annoying than seeing the level timer counting down because both Corbijn and Weiss have been downed in your absence — unless you know you’re about to be thrown back 20-plus minutes because of the game’s uneven checkpoints.

As previously mentioned, the other hook in Mindjack is that the game is perpetually online, meaning you can enter other players’ games and they can enter yours. Up to six people can be in a game at once, three on the FIA side (blue) and three on the NERKAS side (red), essentially turning the campaign into an ongoing Deathmatch. This functionality is the reason everything is broken up into bite-sized battles and weapons are constantly vanishing from your inventory.

After each fight, everyone gets experience and levels up, unlocking various perks and rules called plug-ins that can be equipped from the main menu. It all works quite well and not relying on the computer to control your partner makes the game a lot more enjoyable. It can also be fun to jump in on the enemy side and make life tough on another player, though hosts retain the ability to boot you (they can also prevent anyone from joining during the initial session setup).

Conceptually intriguing, Mindjack leaves a lot of potential on the table by packaging its novelties with an ambiguous story, uninspired level design and repetitive combat. Playing online with others is fun, though, and it alleviates enough of the issues that shooter fans can consider picking this up once the price comes down.

By Herija Green
This entry was posted on Thursday, February 17th, 2011 at 4:41 pm and is filed under Herija Green, Video Game Reviews. You can follow any responses to this entry through the RSS 2.0 feed. You can skip to the end and leave a response. Pinging is currently not allowed.