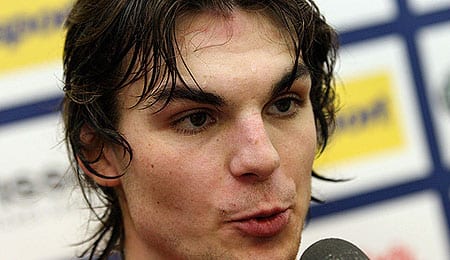 Michael Frolik has a chance to shine with the Blackhawks.

We’ve got a short edition of the Wire Troll this week because we understand that even Fantasy hockey fans need to celebrate Valentine’s Day before they get in hot water with their significant others. There are only two special waiver wire pickups this week and one of them is only featured because he finally came back and actually played an NHL game so we will take a deeper look at him.

We’re at the time of year when the real NHL trade deadline (February 28) is just a little over two weeks away. Check your leagues accordingly because every league has a different deadline. The market consists of more than just your trades this time of year. Waiver wire pickups are an integral part of the process as well.

The nicest thing is digging into numerous magazines in the Fantasy hockey world. There is an ample amount of information that one can easily access, but there is the one catch here: Most of it does not come free. Paying money out to win your money league is as American as apple pie, but you don’t necessarily have to dole out cash to guarantee a win.

Free sites often offer the same — if not better — advice to be honest. Personally, my policy is never to charge for this information. Why? Because the point is to help people. There are enough other ways to achieve financial security. However, I do salute every guy that does make it a financial career because they deserve as much love as anyone else.

Since we are in the business of showing our fans the Fantasy love, let us get back to that. This week, let’s take a look at two players that are really intriguing to Fantasy owners in different ways.

Peter Forsberg, C, Colorado Avalance: So about this Forsberg guy that has made a comeback. He is still pretty good, but it’s unfair to judge his play at the current time. Forsberg failed to record any points in his first two games back — both Colorado losses, I might add — but some signs of his former self have definitely surfaced. It is tough to even gauge what will happen in the next few games but it just seems that Forsberg has good linemates in Milan Hejduk and Matt Duchene, so he’s worth keeping an eye on.

Fantasy owners will have to give Forsberg time as chemistry develops. He will score soon and though I still believe that he will not average a point a game this season, he may come close. That is the key. Forsberg is a Fantasy option that will become worth it. Just be patient and put up with the early bad minuses. Currently, about four points per every five games might just do it, and that is not too shabby.

Michael Frolik, RW, Chicago Blackhawks: It will only be a matter of time before Frolik starts scoring for the Blackhawks. Yes, the first game usually results in a not so good debut so do not panic, Fantasy owners. It will be interesting to see how Chicago uses him, but more than likely he can play on the first or second line. I do think he is better suited to play with Jonathan Toews and Patrick Kane, and if he stays with that pair, then hopefully the Frolik of the past two seasons resurfaces at last.

That will be the ultimate key. How Frolik plays now in Chicago will go a long way in determining his Fantasy value going beyond. If you are in a keeper league, he is worth it based on the forwards in Chicago’s arsenal. If Frolik gets 20 points the rest of the way, then he is worth a pickup in your league. Make a cheap play for him and you may just get quite a reward. This guy has the ability to rise above the pressure.

Happy Valentine’s Day from everyone here at RotoRob. Bring us your Fantasy dilemmas and we will try to come up with a solution. Come one, come all and we’ll see you next week.

By Chris Wassel
Tags: Valentine's Day
This entry was posted on Sunday, February 13th, 2011 at 2:56 pm and is filed under Chris Wassel, HOCKEY, The Wire Troll. You can follow any responses to this entry through the RSS 2.0 feed. You can leave a response, or trackback from your own site.