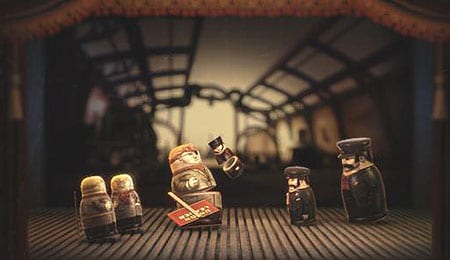 The NFL has nothing on the contentious labour negotiations seen in Stacking.

Leave it to unconventional developer Double Fine to build a video game entirely around the concept of depression era Russian nesting dolls come to life. Recently released on both Xbox Live Arcade and the Playstation Network, Stacking is one of the more truly original titles to make its way onto consoles in quite some time. However, does that originality translate into a solid game or is it just a quirky title that’s more style than substance?

As this isn’t an action title and doesn’t require precise commands at any point, the controls are pretty much a non-factor. You stack/unstack, talk and use your special ability with the face buttons while the shoulder buttons are used to keep track of your objectives. The only time the controls become even mildly annoying is when dolls are clustered together and you end up entering the wrong one.

Rarely do you see such simplistic visual fare in modern games. And yet, this world of limbless dolls is created with such artistic style that you can’t help but admire the hand-crafted beauty. There’s loads of charm and personality packed into these nesting dolls, and the silent film cut scenes that are created with the look of an off-Broadway diorama fit the game’s tenor.

Upbeat and whimsical, Stacking’s soundtrack hits the mark throughout. Close your eyes while the music plays and you can envision a scene out of a Charlie Chaplin movie or a dastardly villain tying a damsel in distress to some train tracks. The sound effects are goofy and cartoonish.

You are Charlie Blackmore, the youngest (and smallest) member of the chimney sweeping Blackmore family. One day your father announces he has found work and that the family’s money troubles have come to an end. Weeks pass, however, and your father does not return. Enter the wicked Baron, who seizes the rest of the Blackmore children to labour for his various enterprises. Now it’s up to you to bring them back and put a stop to the Baron’s sinister ways once and for all.

The basic setup here is that the game will present you with an objective, and then it’s up to you to talk to other dolls to determine what course of action is necessary to complete it. Most will have multiple solutions, and while you’re only obligated to come up with one to advance the story, it’s still enjoyable to find all the different ways you can accomplish the same thing.

Some are blatantly obvious and straightforward while others require the use of multiple dolls and abilities to pull off. If you get stuck, Stacking has a built-in hint system that all but ensures you’ll never struggle longer than you care to at any point during the game. Those that choose to abuse it can basically have every solution laid out for them so I’d advise restraint — for one, it’s always more satisfying to figure it out on your own, and second, if you go that route you can blow right through the game in no time flat.

How you go about solving these puzzles is to “stack” into other dolls and employ their unique skills to solve them. Just like real nesting dolls, the ones in Stacking grow incrementally, and you cannot jump into a doll more than one size larger. Charlie is the smallest doll in the game, so to reach the largest he’ll need to stack about five dolls in between. Usually it can be any doll you’d like, though there are times when you’ll need to combine skills and have to track down a specific set.

Beyond unraveling the game’s dilemmas, each location also has a set of unique dolls to find as well a list of hi-jinks. Within each level’s unique dolls there is a small sub-set. For instance, in one you’re asked to locate a family of magicians from smallest to largest. Find and get them all nested together and you’ll be treated to an extra cut scene. In addition, all unique dolls possess a singular ability that is exclusive to them. Not surprisingly, it’s those one-of-a-kind skills that are often needed to advance in the game.

Hi-jinks are unspecified activities for you to complete. You’re given a list of names that provide clues as to what you need to do. At first it’ll seem meaningless, saying something like “All Wrapped Up,” but then you’ll find a doll with the ability to mummify and things will fall into place. It’s a fun little distraction that encourages you to try different things.

If you enjoy solving puzzles and are searching for something different, Stacking fits the bill with an experience that’s unique and engaging. However, if you’re impatient, aren’t interested in trying multiple solutions or exploring the levels you may find there’s not enough to warrant the asking price.

By Herija Green
This entry was posted on Sunday, February 13th, 2011 at 8:25 pm and is filed under Herija Green, Video Game Reviews. You can follow any responses to this entry through the RSS 2.0 feed. You can skip to the end and leave a response. Pinging is currently not allowed.