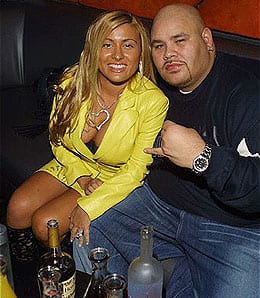 The Yanks must be desperate to have signed fat bastard Bartolo Colon and his orange-faced bimbo.

Editor’s Note: This is the debut article for Philip Heilman, who will be writing baseball, basketball and football content for RotoRob. Please help me welcome him to the site.

With pitchers and catchers reporting to minor league facilities very shortly, baseball is finally ending its hiatus. In case you missed it, after striking out with Cliff Lee this offseason, the Yankees still managed to put together one hell of a pitching staff. With the recent acquisitions of Bartolo Colon, Mark Prior and Freddy Garcia, Brian Cashman must have some insider knowledge on a time machine (or perhaps the Yanks have once again wielded their mighty spending power and bought themselves a hot tub time machine). If not, C.C. Sabathia is going to have even more weight on his shoulders than he did last season. Can the big guy start every second day?

The real purpose of this article isn’t to bash on the Yankees (although nothing beats that as a Red Sox fan), but to touch on some more notable free agent acquisitions that occurred between now and the last Aubrey Huff thong dance. Specifically, we’ll examine a few moves that change the complexion of AL- or NL-only leagues, while also still affecting more traditional leagues.

Here are three players switching leagues and switching sceneries to look out for:

Derrek Lee, 1B, Baltimore Orioles (NL to AL): Baltimore picked up Lee following a somewhat down season split between Chicago and Atlanta. While Lee is 35, the Orioles are looking to him to help anchor a lineup that has the potential to be very strong with the additions of Mark Reynolds and Vladimir Guerrero. Along with Nick Markakis, Brian Roberts and Luke Scott, Lee should up his modest 2010 numbers of 19 homers and 80 ribbies. With the Oriole pitching staff still suspect, the offense will be what wins them their share of games, and Lee, if healthy, should be a strong point and worthy of a late round pickup.

Javier Vazquez, SP, Florida Marlins (AL to NL): Can we finally agree that Javy is a National League only pitcher? Following another tumultuous campaign in the Bronx, Vazquez is back to where he belongs in the National League, with Florida. He last appeared in the National League in 2009 with the Braves, posting 238 strikeouts and a sub-three ERA. It is doubtful his dip in production had as much to do with loss of talent as it did with switching leagues. Back in the Senior Circuit, Vazquez should be a comparable middle-to-back-of-the-rotation starter capable of reaching 200+ Ks and 14-to-18 wins. This guy knows how to pitch in the NL East, and will be a good pickup as a third Fantasy starter.

Bill Hall, OF/2B, Houston Astros (AL to NL): A prototypical sleeper, Hall should be worth a late-round pickup as a utility guy that can fit into multiple positions in your lineup. In only 344 at-bats last season, he cranked out 18 bombs. With more playing time expected on a sub par Houston team, and another short porch in left field, Hall is fully capable of 25+ dingers in 2011. If you miss out on the Chase Utley/Robinson Cano/Dustin Pedroia group at second base or face injuries, Hall is a capable short-term fix.

By Phillip Heilman
This entry was posted on Thursday, February 10th, 2011 at 9:46 am and is filed under BASEBALL, Free agents, Phillip Heilman. You can follow any responses to this entry through the RSS 2.0 feed. You can leave a response, or trackback from your own site.