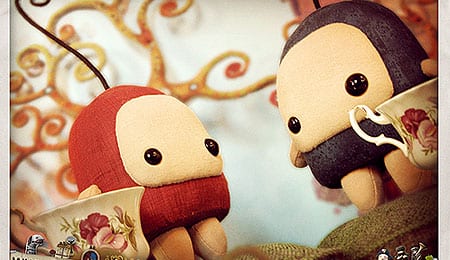 I think ilomilo might be Swedish for “ridiculously cute.”

In a gaming landscape overrun by shooters it’s nice every once in a while to allow love into your hearts — and what better time to embrace the greatest of emotions than Valentine’s Day? So to get you “in the mood” we’re offering up copies of Southend Interactive’s ilomilo, which just happens to be the tale of two friends’ struggle to reunite with one another. Awwwwwwwww.

But enough of this sappy stuff, you wanna know how to win!

1. Cruise on over to our review and post a comment there telling us which video game character you’d like to have a romance (or bromance) with, but keep it clean! Please note only comments on the review itself will be counted. Comments left on this page will not. (That’s one entry.)

3. Tweet the following, “What says love better than a video game? Nothing! That’s why @VideoGamerRob is giving away copies of ilomilo – http://bit.ly/fQ45am #VGRV” (That’s one entry.) Make sure to include the hash tag!

Since Valentine’s Day is all about love and togetherness, we’re offering bonus entries (up to three) to existing followers that refer new ones. To get credit this person has to be a new follower of @VideoGamerRob — and no, you cannot have someone unfollow and return, that info is tracked — and they need to drop me a note on Twitter letting me know who referred them.

All entries must be received by 5 p.m. PST/8 p.m. EST on Monday, February 14. Winners will be selected at random.

By Herija Green
This entry was posted on Thursday, February 10th, 2011 at 10:58 pm and is filed under Contests, Herija Green, Video Game Reviews. You can follow any responses to this entry through the RSS 2.0 feed. Responses are currently closed, but you can trackback from your own site.