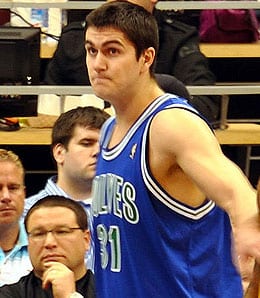 Darko Milicic is finally starting to live up to his draft status.

Welcome to the Week Five edition of The Wire Troll, our weekly look at players that may be available on your league waiver wire but could see a spike in Fantasy value due to a variety of circumstances. A few familiar faces adorn our holiday table this week, along with some new additions that bring their own brand of excitement…kind of like Aunt Betty’s Turkey Surprise.

Speaking of which, it’s Thanksgiving Week in the United States, and The Troll would like to wish all our American readers a safe and happy Turkey Day. In celebration, The Troll offers this rare glimpse into his softer, coffee house in winter, poetic side. Once you read it, you’ll know why those glimpses are so rare.

May your bird not be dry,
May you save room for pie
May your taters not be lumpy,
And your gravy not be clumpy.
May the green beans be so bright
And the stuffing be just right.
And after your leftovers are all stashed away
Screw that dreadful football, and watch some NBA.

Note: all stats include the games of Nov. 19.

Darko Milicic, Minnesota Timberwolves: Let’s set the Wayback Machine for the 2003 NBA draft. You’re on the clock, and you’re staring at a draft board that contains the following names: Dwyane Wade, Chris Bosh, Carmelo Anthony, Chris Kaman and Darko Milicic. It’s a no-brainer, right? Gotta get the Darko, and get him right freakin’ now. He’s a foreign guy, so he must be good, right? Nice call, bunky…somebody cue the “loser” music and get this poor schmuck a copy of the home game. Though he remains one of the worst top-two picks in NBA draft history, Milicic looks to be finally, at last, at long last, beginning to show what the Pistons saw in him when they selected him ahead of the aforementioned future NBA stars. He was quietly cobbling together a nice little season, but he turned up the volume with a 23-point, 16-rebound, six-block monster Friday night. Milicic is not much of an offensive threat, but at the very least, he’ll provide plenty of blocked shots and a fair number of rebounds to help your Fantasy cause.

Drew Gooden, PF/C, Milwaukee Bucks: Gooden started slowly this season, averaging just 8.1 points and 4.7 boards through Nov. 6. As a result, he was dropped in some leagues…but the time has come to make sure that the veteran power forward is not languishing on your league’s wire. Over the past three games, Gooden has averaged 18 points and 10.3 boards (and that was before he went off for 16 and 16 Saturday night), and looks to be setting in as a fixture in the Bucks’ rotation. He may lose some playing time when Carlos Delfino makes it back onto the floor, but for now, Gooden should be owned in most formats.

Sonny Weems, Toronto Raptors: Weems looks to be riding the lead horse in the Raptors’ small forward carousel at the moment, averaging 16.6/2.8/2.8 with 1.2 treys in his first five games as a starter. If you pick up Weems, keep a close eye on things, as Linas Kleiza, DeMar DeRozan and even Leandro Barbosa (when he makes it back to full health) could erode his minutes. The uncertainties in Toronto limit Weems’ value to deeper leagues, but he should be on everyone’s radar screens.

Kris Humphries, New Jersey Nets: Why are the Nets the Nets? Here’s one reason. After trading for double-double machine and three-point bomber Troy Murphy (and failing to listen to pundits like The Troll, who never saw The Murph as a good fit in Joisey), those tricksters have decided that journeyman Kris Humphries and rookie Derrick Favors should be their duo at power forward, while Murphy rides the pine. Murph’s expiring contract makes him a great trade candidate, and The Troll is trying to buy him low (okay, very low) in some deep leagues. For Humphries’ part, he is averaging 11.2 points, 12.4 boards and 1.8 blocks as a starter, and he doesn’t shoot enough free throws for his crummy eye at the stripe to hurt very much (although Saturday he managed to hit four-of-five). As for the Nets, maybe things will turn around when they become the Brooklyn SomethingorOthers in 2012. And memo to the team: The Troll is available to help out with that whole “player personnel” thing. Hey, give me a shot at it…what, are you afraid you’ll finish last with The Troll pulling the levers? Besides, I think The Brooklyn Barclays has a nice ring to it.

Wesley Matthews, Portland Trail Blazers: With Brandon Roy’s knees creaking like the suspension on a ’76 Chevette, Matthews has stepped up in a big way, averaging 25 points, 6.5 boards, 2.5 assists, 1.5 steals, 1.5 blocks and four treys per night in his first two games as a starter in Roy’s stead (although on Saturday he cooled off a bit). Wow. Matthews has been outstanding, but his Fantasy value is directly tied to Roy’s health. There is also the spectre of Rudy Fernandez behind him, but as things stand now, Matthews would benefit the most from Roy shutting it down. And don’t think that couldn’t happen sooner than later, gang. Do you own Roy? Better snag Matthews, too…and hurry.

Jose Calderon, Toronto Raptors: The trade of Jarrett Jack to New Orleans opens up plenty of minutes for Calderon, and The Troll is expecting big things from the former Fantasy stud. Calderon has been in a timeshare with JJ the entire season, but his per-36 numbers still look enticing: 12.6 points, 8.9 dimes, 1.7 steals and one trey. His shooting percentage has been absolute crap, but his career track record says that it will improve in a big way. The Spanish Fly also takes care of the ball, so turnovers shouldn’t be a problem. Calderon is available in about 40 per cent of leagues, and his ownership should be in the 80 per cent range by the end of the week. Don’t wait; act now if he’s out there.

By Buck Davidson
Tags: Thanksgiving
This entry was posted on Sunday, November 21st, 2010 at 1:40 pm and is filed under BASKETBALL, Buck Davidson, The Wire Troll. You can follow any responses to this entry through the RSS 2.0 feed. Both comments and pings are currently closed.