Curt Young Has Plenty to Work With 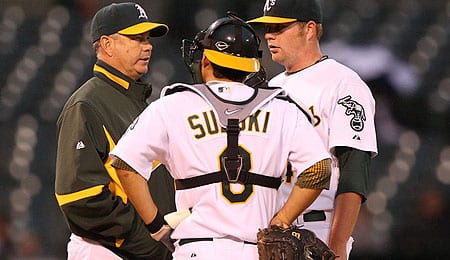 Former Oakland A’s pitching coach Curt Young (left) inherits a Boston staff that should be much better next season regardless of what he does.

New Red Sox pitching coach Curt Young will have plenty of tools at his disposal, and despite the fact he’s not lauded for his work, his track record speaks for itself.

Hired to replace John Farrell, who has taken over as the manager in Toronto, Young doesn’t get talked about in the same light as, say, Dave Duncan or Leo Mazzone, but just look at what he’s done in Oakland since landing the pitching coach job in 2004. The A’s composite ERA over that stretch is 4.03 with a .257 BAA – both figures the best in the AL.

Last season, Young helped a very young rotation put together a remarkable 3.47 ERA – lowest in the AL since 1990 – despite the fact that expected ace Brett Anderson missed a good chunk of the season.

Okay, so Young knows how to work with youngsters. That’s great, but how will he fare with a veteran staff in Boston?

Not to worry, for Young has experience dealing with talented, big ego aces as well. Remember that went he first took over in Oakland, his staff included Tim Hudson, Barry Zito, Mark Mulder, Rich Harden and Mark Redman – a damn good staff with a mix of vets and youngsters.

In moving to the Red Sox, Young inherits an enviable rotation, three members of which will almost assuredly be better than they were in 2010 regardless of what he does (Josh Beckett, John Lackey and Daisuke Matsuzaka). Jon Lester and Clay Buchholz should continue to build on the progress they made last season, and let’s not forget that Junichi Tazawa – one of the team’s top prospects – will be returning after undergoing Tommy John surgery prior to the 2010 campaign.

Felix Doubront showed potential last season, and his long-term future is probably as a starter, but most believe he’ll be used as trade bait this season now that his main supporter – Farrell – has moved on. However, GM Theo Epstein insists that the team has no plans to move Doubront.

Finally, Young has a new toy to play with as Boston just acquired lefty Andrew Miller, once labelled as a can’t miss prospect, but one that’s done exactly that. However, he’s just 25 and if Young can turn Miller around to the point where he’s merely a useful reliever, that would have to be considered a coup.

One interesting tidbit about Young’s hiring is that he says he’s going to talk to Farrell about the staff, something manager Terry Francona says is true, even though it seems off the wall considering Farrell is now employed by one of Boston’s main competitors.

“Johnny actually offered the other night that when things slow down that he would be happy to talk to Curt,” Francona said. Um, okay. I wonder how the Blue Jay organization feels about its new field boss helping out an AL East competitor. It’s like leaving your job as the marketing manager for McDonalds to join Burger King and then telling Burger King that you’ll be helping the person at McDonalds that has your old job. Why would any employer have a problem with that?

There were positive health reports about four key members of the 2010 Red Sox walking wounded corps: Dustin Pedroia (foot) will begin running in about two weeks; Kevin Youkilis (thumb) is okay now, and should be able to follow his usual off-season training regimen; Jacoby Ellsbury (ribs) is working out now and is showing no ill effects; and Mike Cameron (abdominal muscle) is improving, and the medical staff will check him out next week, so we should have a clearer idea of how he’s faring shortly.

The Red Sox plan to aggressively pursue their two key free agents, catcher Victor Martinez and Silver Slugger third baseman Adrian Beltre, although if Beltre leaves, Boston plans to shift Youkilis back over from first base to third base. And the fact they’ve already had this conversation with Youk suggests the BoSox don’t like their chances of re-signing Beltre.

By RotoRob
This entry was posted on Monday, November 15th, 2010 at 2:49 pm and is filed under BASEBALL, RotoRob. You can follow any responses to this entry through the RSS 2.0 feed. You can skip to the end and leave a response. Pinging is currently not allowed.