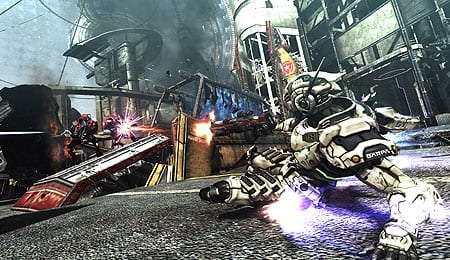 With a release date positioned between a trio of heavyweight shooters, Vanquish looked to be facing an uphill battle. The presence of Shinji Mikami, creator of the Resident Evil series, helped raise its profile a bit, but it needed to deliver something gamers weren’t going to find in Halo: Reach or the upcoming Call of Duty: Black Ops. To that end, Vanquish succeeds in impressive fashion.

We may as well get this out of the way: Vanquish will have a familiar look and feel for anyone that’s played Gears of War, and those similarities begin with the controls — reloading and weapon switching are identical. You’ll mantle, pop into and out of cover, and do evasion rolls the same way as well. Of course, given how polished all of those things are in Gears that should be considered high praise.

Vanquish does differentiate itself with the ability to use thrusters to boost across the battlefield as well as slowing time with your combat suit’s AR Mode. This can be manually engaged by holding down the left trigger and pushing “A,” though it also kicks in automatically if you absorb too much damage.

Everything controls crisply with weapons providing ample recoil. My lone complaint is boosting while manually slowing time can be a bit cumbersome when you’ve got to adjust the camera as well. This leads to instances where you get too close to enemies or waste precious AR seconds trying to simultaneously manipulate the camera and aim.

The visual star of Vanquish is the Augmented Reaction Suit (ARS) that you wear. It features an incredible amount of detail work and just looks really cool (even if the visor is over your mouth), especially when your weapon is transforming. Backgrounds are also well done and do a good job of creating the feeling that you’re aboard a massive structure.

What’s really impressive about the graphics is the sheer amount of stuff filling the screen at any one time (troops, robots, bullets, explosions, etc.) and the game’s ability to handle all of it without a hint of slowdown in the frame rate even when playing directly from the disc. Slowing time is also striking as all those graphical details you don’t have time to see at full speed come into focus.

Gunfire and explosions boom through your speakers and the musical accompaniment matches the tenor of frantic action. That’s the good. The dialogue is another matter. Veteran voice actor Steven Blum does an over-the-top gravelly voice for seasoned military man Robert Burns that I found to be too cartoonish, which isn’t something you want in a game where people are being killed all around you. The other primary characters (Sam Gideon and Elena Ivanova) aren’t nearly as stereotypical, but still fail to add much emotional depth to the story.

Set in a future where global overpopulation has given rise to famine, Vanquish opens with a new militaristic Russian faction taking control of a massive space station and using its microwave energy array to unleash complete devastation on San Francisco. Calling themselves the Order of the Russian Star, these terrorists intend on making New York City their next target if the President doesn’t offer up the United States’ unconditional surrender. Not on your watch!

Instead of curling up into the fetal position, the President dispatches the marines to take back the space station. Accompanying them is Sam Gideon (you), a researcher at the Defense Advanced Research Projects Agency (DARPA), along with his fancy ass-kicking AR suit. Now it’s up to all of you to get in there and stop an army of robotic Russians from wiping NYC off the map.

The set up for Vanquish is solid enough, but the character and plot development represent the game’s low point. There are too many predictably implausible twists that make little sense, and the characters never seem to advance beyond who they are in Act One. Some of the stuff in the final act plays out so confusingly that I’m almost convinced a cut scene was left out of the final build.

However, that unfocused and baffling storyline is in direct contrast to the game’s fantastic action, which throws you knee deep into the shit almost immediately and rarely allows you time to breathe as you fight wave after wave of enemies. As noted earlier, Vanquish definitely has a similar feel to Gears of War, but it never feels like a rip off. Instead it builds on those strong third-person cover mechanics while mixing in fast-paced boosting and the sweet bullet time slowdown for a feeling of controlled chaos.

Basic combat primarily consists of moving from cover to cover and mowing down robots, but some of the larger machines require more advanced tactics — this is where Vanquish ups its game as you slide across the ground at absurd speeds, outflank an enemy and then slow time while unloading a full clip into his weak spot. You’ve only got a finite opening for both abilities, though, and once your meter runs out the suit “overheats,” leaving you vulnerable while it cools down. This turns some of the tougher battles into a game of cat and mouse.

Boss battles generally feature that same hit-and-run strategy, but with a twist. These things can kill you with one hit. While that might sound cheap, it rarely feels that way. Bosses tend to telegraph their attacks, giving you ample opportunity to avoid them by either boosting or entering cover. If you sustain a fatal blow, you head right back to the checkpoint, which are very well spaced, and the only real lasting effect is a point penalty at the end of the mission.

In addition to the gun play, the game features some God of War-style quick time events where you’ll need to mash a button or rotate the analog stick to pull off high impact moves. You can also melee your enemies, but for some reason punching a robot overheats your suit. It’s a weird decision and because of it I almost never used melee. If a robot got too close I’d simply jump back, slow time and fire since that combination was just as effective without the drawback of overheating.

As you progress, you’ll be given the opportunity to upgrade your weapons as well. This can be done by grabbing upgrade cubes that have been dropped by defeated foes or by picking up an identical weapon to one you’ve got equipped when your current one has full ammo. You’re able to carry three at a time, and the game contains a healthy mix of the familiar (shotgun, sniper rifle, assault rifle) and the unique (a low frequency gun that penetrates walls with a bubble of death).

Completing the game should take around seven hours, including deaths, but once you get the feel for it you can zoom through it much quicker than that. After completing each act, you’ll unlock challenge levels (five total with five rounds apiece), which present some of the more difficult moments in the game as the screen literally fills with enemies. It gives the game some added replay value, which is important since Vanquish has no multiplayer component whatsoever — no team slayer, no co-op, nothing. I understand why it wasn’t included, as much of what makes Vanquish different really wouldn’t translate well to PvP, but that omission could still be a deal breaker for some.

Despite its status as a single-player game in a multiplayer genre, Vanquish is absolutely worth picking up if you’re any kind of third-person shooter fan. It’s familiar without coming off as a copy, challenging without being cheap and frenetic without being gimmicky. If you can’t get past the lack of multiplayer you’re only denying yourself from playing one of the top shooters of the year.

By HC Green
This entry was posted on Saturday, October 23rd, 2010 at 1:14 pm and is filed under Herija Green, Video Game Reviews. You can follow any responses to this entry through the RSS 2.0 feed. You can skip to the end and leave a response. Pinging is currently not allowed.