Dear RotoRob: The Dangers of Micromanaging 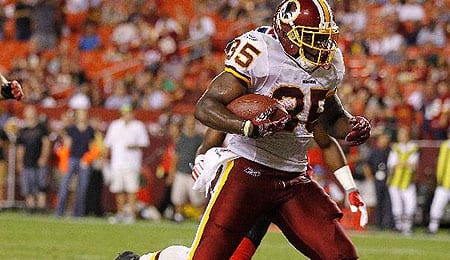 Keiland Williams looked like a sleeper, but he’s slipped down the Redskin depth chart.

I have the ATL defense and was thinking about playing it against the hapless 49ers…this would mean benching the Steelers Defense vs. the Ravens. Who would you play? Both defenses are at home.

By the way, I did screw up by dropping Felix Jones for Keiland Williams…man, I thought I was getting a sleeper. Now Ryan Torain looks like the No. 2 guy in Washington. I’m thinking of dropping Williams for BenJarvis Green-Ellis, Javon Ringer or Rashad Jennings.

I know playing the matchups can be tempting, but I firmly believe you don’t bench a stud — and right now, the Steelers’ defense is a stud Fantasy unit. Even looking at the matchups, what has Baltimore’s offense done to make you worry? They scored 20 points combined in two games against New York and Cincinnati with six turnovers, and right now Pittsburgh’s D is better than either of those so I’d stick with them.

The short answer to your second question is yes. I would not have dropped Jones for Williams. I like Williams’s potential – Mike Shanahan has a long history of finding backs, and he likes Williams — but Jones is a home run hitter. Eventually, the Cowboys are going to find a way to get him loose. Ringer and Jennings are true reserves behind more talented and durable starters, making that switch a lateral move at best barring injury.

Green-Ellis is interesting now that Laurence Maroney and Kevin Faulk are out of the equation. If you can’t get Jones back, I’d make the swap of Williams for Green-Ellis.

Also, don’t forget to enter our contest for a chance to win one of two free copies of Hydrophobia.

By Herija Green
This entry was posted on Friday, October 1st, 2010 at 1:27 pm and is filed under Dear RotoRob, FOOTBALL, Herija Green. You can follow any responses to this entry through the RSS 2.0 feed. You can leave a response, or trackback from your own site.