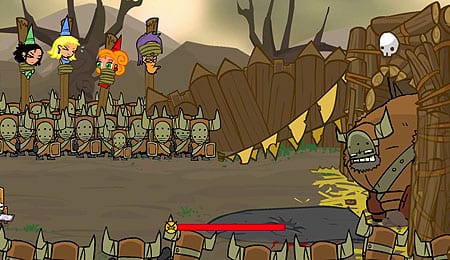 Beaten, bruised, bloodied, it’s just you against an army of…what, ten? Twenty? Hundreds? You grab your trusted blade, look at the devastating sword battles around you, grit your teeth and prepare for the fight. Yes, video gamers have seen this situation umpteen times in the past. But never before has it been so adorable, and almost never as fun. Castle Crashers wowed XBox Live players two years ago, and now it’s doing the same thing on the Playstation 3.

PS3 owners new to Castle Crashers will notice a lot of similarities with the earlier Scott Pilgrim vs. The World. At its core, Castle Crashers is a beat-em-up affair. And as with all beat-em-ups, be they current gen or old-school 8-bit style, the key to great controls is crispness, and Castle Crashers succeeds here. The button map is a standard brawler setup: one button to jump, one to attack, and one for an alternate heavier attack. As befits the fantasy setting, Castle Crashers also adds in a magic attack. Each of these actions responds with the according crisp feel necessary to give you the feeling of complete control when dealing with hordes of evildoers.

Longtime gamers may remember old fantasy brawler Golden Axe, which pitted loin-clothed warriors against an army of nasty villains while moving from left to right. Picture that through the filter of cartoon director Genndy Tartakovsky (The PowerPuff Girls, Samurai Jack) and you’ll have the visual aesthetic of Castle Crashers. The characters and background all have a cartoon, cel-shaded feel to them, which puts the violence purely in a fantasy world. It keeps the mood light and fits the frenetic pacing of the game. Bosses and backgrounds work perfectly with bright colours and appropriate flair. Despite the overall goofy mood of the game, it’s gorgeously done and a delight just to watch.

The musical score isn’t anything to write home about, but they generally aren’t for PSN/XBox Live releases. It works for the game, as do the sound effects, but you won’t find yourself humming any new tunes or quoting the game to your fellow Crasher friends.

It seems so simple, right? Bad guys invade and do bad things. One (or two, three, or four) heroes emerge, fight off billions of bad guys — some bigger than others — and kiss a few ladies along the way. It’s a core formula that’s worked since the infancy of video games, and Castle Crashers doesn’t mess with it. What it does do, however, is create a frenetic pace against stunning artwork, then it brings all together with fun co-op play and a little RPG variation.

Yes, you hack, slash, and magic your way to the goal all the way on the other side of the screen. Each stage is chosen (or re-visited) on an overworld map, including the ability to go back to your home base for additional weapons. Then it’s on to the next fight. Will you go it alone or will you bring some buddies with you? Whether local or online, Castle Crashers co-op is a blast to play, thanks to its crisp controls, non-stop enemies, and colourful graphics. Invite a friend over or online, crack open a brew, and have fun for a few hours.

There’s depth in the gameplay thanks to Castle Crashers’ leveling system. It won’t wow any RPG veterans, but it adds an element to the game that also invites replayability; by the time you get to the end of your journey, you’ll have tweaked enough character traits to make your hero your own. Of course, you can go back and hit other levels to try to max absolutely everything. With the lure of online co-op, that’s a pretty attractive notion right there.

In a word, Castle Crashers is fun. In fact, it’s a ton of fun, and it’s even more fun with a friend. It looks great, it controls great, and you’ll have a blast playing it. I admit that I’m a PS3 guy, so this was my first introduction to the game despite its long-standing XBox 360 availability, and it was absolutely worth the hype.

Don’t forget to enter our contest for a chance to win one of two copies of Hydrophobia!

By Mike Chen
Tags: Video Game Review
This entry was posted on Thursday, September 30th, 2010 at 2:56 pm and is filed under Mike Chen, Video Game Reviews. You can follow any responses to this entry through the RSS 2.0 feed. Both comments and pings are currently closed.