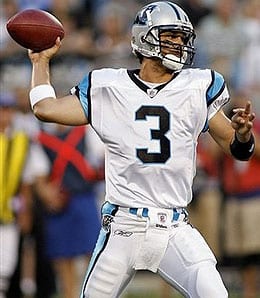 Matt Moore suffered a concussion in Week One, but may not miss time.

Kolb threw ten passes before his first start of 2010 ended. While being sacked by Green Bay Packers linebacker Clay Matthews, Kolb was driven into the ground head first, resulting in a concussion. While many NFL experts were immediately speculating that the Michael Vick era would begin, on Monday morning, head coach Andy Reid said that this is still Kolb’s team as long as he’s healthy.

Kolb won’t practice until Friday and will have to pass a test to play. Fantasy owners that took a shot with him should hold on to him for now. He had a rough go of things in Week One, but with a potential matchup against the Detroit Lions this week, he could offer some value if he starts.

Clearly, the heat is on, though, as Vick performed well and a few more clunkers will get the Philly fans riled up enough to call for Vick to take over permanently.

Stafford was 11-of-15 for 83 yards on Sunday before a Julius Peppers sack ended his day and potentially knocked him out of the lineup for a month. Stafford has a separated shoulder, which won’t require surgery, but it will keep him sidelined for a while.

The Lions looked somewhat decent in the opener so there is no reason to drop Stafford at this point if you’re in a deep league. If you are desperate for a roster spot, he can be cut for a few weeks because, even when healthy, he’s nothing more than a borderline No. 2 Fantasy QB. But if the Lions offense continues to improve, after he returns Stafford could be a viable option down the stretch of the season.

NFL fans know that the Carolina Panthers question whether they even want Moore as their starting quarterback, which means Fantasy owners should be on the fence even more so. Moore had a dreadful first game, going 18-of-33 for 182 yards, one touchdown and three interceptions. What’s worse is that two of his interceptions were in the Giants’ end zone. Without question, the game would have taken a different turn if the Panthers even garnered field goals out of those red zone entries.

Nonetheless, it’s time to drop Moore, even if he may not miss any time with this injury. It’s not that Jimmy Clausen is ready quite yet, but the time is ticking for Moore anyways, and now he’s suffered a concussion and put forth a horrible performance. If he’s your starting Fantasy quarterback, either you’re in a 32-team league or your worst enemy drafted your team. Drop Moore.

NFL fans saw the Packers look impressive in their opener and one of the reasons why is they were able to run the ball. First-string running back Grant left the game in the first half with what was originally thought to be a sprained ankle but wound up involving torn ligaments, meaning he is done for the season.

As a result of this serious loss, backup Brandon Jackson is definitely worth a pickup. NFL betting cappers saw him pick up 85 yards in Grant’s absence (63 rushing, 12 receiving) and the Packers get a visit from the feeble Buffalo Bills this week. Given the fact that the Bills have a pitiful run defense, Jackson could have a big game, and either way he’s bound to be among the week’s hottest waiver wire pickups.

It was quite evident that Fitzgerald was not 100 per cent in the opener against the St. Louis Rams. He lacked the explosiveness that we are used to seeing from him. Fitzgerald’s knee pain is a concern for NFL betting handicappers and Fantasy players. From a logical standpoint, it doesn’t make sense that the injury gets better from here on in, but Fitzgerald suggests that he’ll be back to full health in a couple of weeks. Owners can only hope that to be the case.

He is a good sell-high candidate if anyone wants him. Anderson is bad and if the Cards switch to rookie Max Hall, it may diminish Fitzgerald’s Fantasy value even more.

Recommendation: Hold, but try to sell high if possible

By RotoRob
This entry was posted on Tuesday, September 14th, 2010 at 11:00 pm and is filed under FOOTBALL, Injuries, RotoRob correspondent report. You can follow any responses to this entry through the RSS 2.0 feed. You can skip to the end and leave a response. Pinging is currently not allowed.