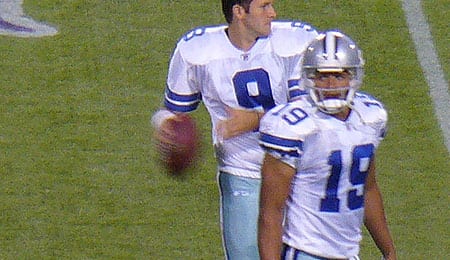 Miles Austin (19) is likely to face plenty of double teams this season.

The 2010 RotoRob NFL Draft Kit concludes today with our final cheat sheet. Tomorrow, we’ll be releasing updated rankings based on recent events, so keep an eye out for that. While you wonder why the Seahawks suck so badly after bye weeks (5-16), let’s take a look at the top wide receivers in Fantasy football.

Nonetheless, we are here to alleviate or exacerbate your concerns.

Andre Johnson is probably the closest thing to a sure bet out of this year’s group. He has posted consecutive seasons of 100-plus receptions and over 1,500 yards receiving. Also, Matt Schaub (when healthy) is a pretty good gunslinger.

Although Randy Moss will be 35 in February, I’ll still throw him at the top. Even in an alleged down year for Tom Brady, Moss still tied for the league lead in touchdown receptions with 13. He is probably not going to venture back to 2007 form, but he’ll still be a pain for defenses.

This tier should renamed the Red Flag Gang. All of them, of course, are the clear cut number ones for their team, but every present danger exists.

Reggie Wayne finished last season in less than stellar fashion. Over the season’s final seven weeks, he posted just one 100-yard receiving day. In fact, he only eclipsed 50 yards once over this span.

DeSean Jackson is to wide receivers what Rob Deer was to power hitters. It’s either a home run or nothing much else. Plus, he has a new quarterback and a struggling offensive line to deal with.

Larry Fitzgerald will be catching passes from Derek Anderson or perhaps a young man by the name of Max Hall. Clearly, you should tread lightly with Fitz.

Calvin Johnson should rebound after a tough 2009…if he stays healthy, that is. Matt Stafford should improve which would be of great assistance to Megatron.

Miles Austin is likely to face a season full of double teams from opposing defenses. He might start out slow, but he might be the best bet of this bunch.

There is slightly more safety in this next group. Roddy White had a contract squabble last season, but got cooking during the regular season with a career-high 11 touchdown receptions. He has been steady over the last three seasons. His only negative is the Falcons are likely to remain a running offense. Thus, explosive plays that are more common with the Johnsons and Moss, will likely be missing from his repertoire.

Playing with what might be the best offense in the NFC gives Greg Jennings a leg up over receivers like Brandon Marshall, who plays for a Miami team that needs more balance. However, Jennings needs to be far more consistent than in ’09.

The Saints tend to pound the rock a bit more than Green Bay which makes Marques Colston’s ceiling a bit different from Jennings. However, Colston has been the more consistent performer of the two; thus, the higher ranking.

These guys were borderline Top 10 receivers just a few years ago, but injuries and Father Time are calling.

The only receiver who doesn’t quite fit the billing is New York’s Steve Smith, who had a breakout season in 2009 with 107 catches. Expect more of the same from him as the Giants’ running game has weakened over the past two years.

The other Steve Smith in Carolina is a one man gang, who will be feast or famine until Carolina’s interminable search for a second receiver stops.

Anquan Boldin may find a big difference between the Arizona and Baltimore passing schemes. The new Raven will find it tough to duplicate his success due to Baltimore’s penchant for running.

Chad Ochocinco will be Robin to Terrell Owens’ Batman, but will Carson Palmer be Commissioner Gordon or The Joker? If Palmer returns to form then Ochocinco stands a decent chance at building upon last year’s bounceback campaign. However, Palmer may have too many mouths to feed for Ochocinco to be anything more than a glorified number two.

If Michael Crabtree stops fighting with Vernon Davis, he might be the bust out of guys of this group in this, his second year.

Percy Harvin’s migraines and a lack of Sidney Rice might prevent him from a strong sophomore campaign. However, with Bernard Berrian’s struggles to grab the mantle as the man in Rice’s absence, Brett Favre may have no other choice than but to utilize Harvin’s many talents.

Be careful of Robert Meachem’s injury history. Otherwise, he’s a decent option because of his big play ability.

Meanwhile in Indianapolis, Pierre Garcon will try to once again distinguish himself from teammates Wayne, Austin Collie, Anthony Gonzalez, and Dallas Clark. There are a ton of weapons in Indy, but hopefully not too many to dull Garcon’s Fantasy value.

Sleeper alert: Mike Wallace was a yards per reception monster last season (he averaged a league-best 19.4 yards per catch).

Santana Moss and Jeremy Maclin may both be frustrating, but for different reasons. Moss is past his prime while Maclin is still trying to figure things out in his second season.

If Fitzgerald’s stock is plummeting, Steve Breaston’s is not in good standing either.

Hines Ward, Donald Driver, and Derrick Mason are all in the same boat; experienced receivers that have big games in them, but cannot carry the load any longer.

The other big sleeper seems to be Devin Aromashodu of Chicago. His collective numbers from last year were by no means awe-inspiring, but a strong finish gives hope that he might be ready to jump another level in 2010.

Until Terrell Owens becomes something that looks like the Terrell Owens, it’s hard to jump on that bandwagon again.

There is a lot of mediocrity of this group, but if Aromashodu does not work out in Chicago, someone has to lead the pack. That someone would be Johnny Knox.

Mike Williams of Tampa Bay falls under the “player to watch” category in this tier. It’s likely that the Bucs will struggle again and if Josh Freeman does not make a second year push, Williams will not have much success in 2010.

Also, we’ll put Sidney Rice in this tier for now.

Julian Edelman and Dez Bryant are the two names to watch in these tiers. Edelman could be in store for a solid season, but that may be largely dependent on what happens with Wes Welker.

Bryant is likely going to spoon fed until he can unseat Roy Williams as the number two receiver in Dallas.

By Derek Jones
This entry was posted on Tuesday, September 7th, 2010 at 4:30 pm and is filed under 2010 RotoRob NFL Draft Kit, Cheat sheets, Derek Jones, FOOTBALL. You can follow any responses to this entry through the RSS 2.0 feed. You can skip to the end and leave a response. Pinging is currently not allowed.