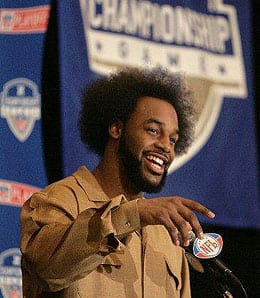 Donovan’s ‘do alone is enough to paint him as a bust.

The 2010 RotoRob NFL Draft Kit continues today as Derek checks in with his first offering. So while we wonder how huge a season Andre Johnson will have, let’s take a look at ten players we’re going to avoid this season.

It’s that time of year again to determine who might be in store for a bumpy 2010. Alas, we proudly present 10 for ’10, an ode to Fantasy busts.

Matt Schaub, Houston Texans: The oft-injured Schaub actually made it through an entire 16-game schedule and posted the sixth-highest passing yardage total in league history. His 4,770 yards led the NFL last season and his 29 touchdown ranked fifth. Schaub will still have Andre Johnson catching passes, but problems persist in 2010. Tight end Owen Daniels is trying to get back into the flow after suffering a torn ACL last season. Meanwhile, without a stellar running game, Schaub attempted 583 passes in ’09. If the running game doesn’t turn it around, envisioning Schaub dropping back 600 times without suffering some sort of an injury may be wishful thinking.

Brett Favre, Minnesota Vikings: A 40-year-old quarterback who is coming off a career year screams bust potential, even if it’s one of the greatest field generals of all-time. Favre reported to training camp this year nearly to the day that he pulled the same trick in 2009. However, there are plenty of red flags for Minnesota before discussing Favre’s ailing ankle. Receivers Percy Harvin and Sidney Rice are already ailing; and of course there remains the issue of Favre’s ankle. It’s hard to imagine Favre getting through the season unscathed once more. Remember, in 2008, he played with a torn bicep and his performance tailed off dramatically by season’s end. Eventually, Father Time comes to get all of us. He may very well be on Favre’s doorstep by season’s conclusion.

Donovan McNabb, Washington Redskins: Does anyone really think the Eagles would trade McNabb within the division to a good situation? When the Redskins face Dallas on September 12, McNabb’s starting receivers could be Santana Moss and Joey Galloway. That would have been a great duo in the early to mid 2000s. Now? Not so much. Look for McNabb to throw to tight ends…a lot. While he may approach his 22-touchdown total from last season, he will labour to get there. Also, McNabb has played a full 16-game slate once in the last six seasons (2008). And keeping him healthy behind an average offensive line will not be easy.

Maurice Jones-Drew, Jacksonville Jaguars: Get out a piece of paper and write down five things you like about the 2010 Jacksonville Jaguars. Once you get past Maurice Jones-Drew, it’s a struggle. After a career season in 2009, Jones-Drew’s numbers may be in store for a dip. His physical running style is not conducive to a long NFL career. He totaled 365 touches last year en route to a 1,300-yard, 16-touchdown effort. That heavy workload was the first for Jones-Drew, whose previous career high in carries was 197. Expect a bit of a decline from him after the busy ’09 season.

Cedric Benson, Cincinnati Bengals: Someone in Cincinnati is going to lose touches because of newcomer Terrell Owens and it could be Benson. Cincy’s lead back finished 16th in standard scoring in a big rebound 2009 campaign. Of course, the Bengals were committed to rushing the football a year ago, finishing fourth in attempts (505) with Benson accounting for roughly 60 per cent of those carries. While those principles still might be intact, Carson Palmer will need to placate not only Owens but also Chad Ochocinco in the passing game. A team does not bring Owens in to be an idle figure. An uptick in attempts for the 26th-ranked passing offense should be expected and, in turn, a decline in Benson’s numbers.

Steven Jackson, St. Louis Rams: Not that anyone expected the Rams to look sensational in the preseason, but they look like the same fare of the previous three years. Jackson had back surgery in the offseason after rushing for 1,416 yards last year. Was that from his performance last year or from carrying the team? Alright, just an insanely bad joke, but point made. As a historical point of reference, Jackson followed up his only other year of 1,400 yards or more in 2006 with a 500-yard decline the following season. Over the same span, he saw his touchdowns drop from 13 to five. Look for another drop in 2010.

Larry Fitzgerald, Arizona Cardinals: A season removed from one of the greatest individual post-season runs in NFL history, Fitzgerald came back to earth in 2009. While he tied for the league lead in touchdown receptions with 13, he barely eclipsed 1,000 yards receiving. The big play was missing from his arsenal in ’09 and it does not figure to improve with Matt Leinart (assuming he isn’t dealt) or Derek Anderson throwing the rock in Arizona. Also, Steve Breaston and Early Doucet will attempt to take pressure off Fitzgerald, who may miss the attention drawn by former teammate Anquan Boldin. The biggest blow for Fitzgerald will likely be the potential bomb that could be the Cardinal quarterback situation. When he was locked in, few in the NFL were better than Kurt Warner. Leinart has a long way to go before he can achieve such praise. Fitzgerald’s production will likely carry the burden of Leinart’s inconsistency. Throw into the mix the sprained MCL Fitzgerald has been dealing with this preseason and we have a recipe for disaster.

Anquan Boldin, Baltimore Ravens: The newly-minted Baltimore Raven receiver will find it difficult to repeat the success he experienced in Arizona. While the Ravens will likely flirt with spread sets with his addition, Boldin’s numbers declined over the past two years in a pass-heavy offense. The days of him catching 80-to-90 balls for 1,200 yards are in the rearview mirror.

Sidney Rice, Minnesota Vikins: Even before the hip injury, he had a spot reserved on this list.

Brandon Marshall, Miami Dolphins: Over the last three seasons, Marshall has caught 307 passes. Now he goes from the pass-happy Broncos to the run-oriented Dolphins. Miami ran 509 times which ranked third in the NFL in 2009. A team that is so devoted to the run (and the wildcat in particular) is not going to quit cold turkey and transform into the Dan Marino Dolphins of the ’80s. Marshall’s touchdowns could hit double digits, but expect the receptions and yardage to take a hit with his new team.

As an added bonus, we’re including this related video — Fantasy football freaks will definitely enjoy this. Perhaps some of you can even relate?

By Derek Jones
This entry was posted on Friday, September 3rd, 2010 at 3:30 pm and is filed under 2010 RotoRob NFL Draft Kit, Busts, Cheat sheets, Derek Jones, FOOTBALL. You can follow any responses to this entry through the RSS 2.0 feed. You can skip to the end and leave a response. Pinging is currently not allowed.