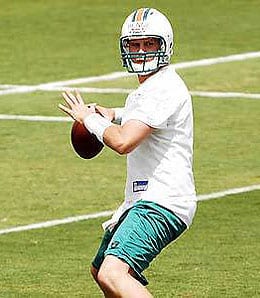 Now that he has better targets, keep an eye on Chad Henne this season.

The 2010 RotoRob NFL Draft Kit rages on today. So while you wonder whether Pacman Jones can make a successful return to the NFL, let’s take a look at the Top 10 Sleepers for the upcoming season.

1. Chad Henne, QB, Miami Dolphins: The former University of Michigan star did not have dazzling statistics in a run-based Dolphin offense last year, throwing for just 2,878 yards with 12 touchdowns and 14 picks. But an off-season trade for wide receiver Brandon Marshall is surely to improve those numbers, as Marshall is one of the best receivers in the league as evidenced by a 21-catch game last season. The Dolphins also have speedster Ted Ginn, Jr. for Henne to throw it to and with Ronnie Brown near full health, this could be a dynamic offense, allowing Henne to become a Fantasy stalwart.

2. LeSean McCoy, RB, Philadelphia Eagles: Unlike all other running backs on this list, McCoy walks into training camp as the starter, not having to really battle for his spot. Former starter Brian Westbrook is gone. Former quarterback Donovan McNabb is gone. But McCoy is still there and looking to show he can carry the Eagle offense. He has excellent hands which should be a huge benefit for new QB Kevin Kolb in the passing game. McCoy could eventually emerge into a Top 10 Fantasy running back, perhaps even by the end of the season, as he has all the skills necessary to be a star.

3. Matt Moore, QB, Carolina Panthers: Moore has kind of just hung around on the Carolina roster since he was drafted in 2007. Now, with the removal of Jake Delhomme from the Panthers, Moore finally has a chance to be the full-time starter and show what he can do. He has shown he can be effective at the quarterback position, and with two of the best running backs in the league behind him in DeAngelo Williams and Jonathan Stewart, the Panthers won’t always have to rely on Moore’s arm. Steve Smith gives him a veteran target at wide receiver, so Moore should be considered a legit Fantasy option.

4. Zach Miller, TE, Oakland Raiders: While at Arizona State University, Miller was consistently one of the best tight ends in a tight end heavy Pac-10. The last three seasons, he’s had the unfortunate task of playing tight end for not only a piss-poor Oakland Raiders team, but having JaMarcus Russell as his quarterback. He still produced respectable numbers, last season catching 66 passes for 805 yards and three scores. This year, Miller has a much more reliable quarterback in Jason Campbell and he should be one of his main targets. We are not saying Campbell is Peyton Manning, but he is a clear upgrade over Russell.

5. Hakeem Nicks, WR, New York Giants: Nicks was a pleasant surprise in his rookie campaign with the Giants last season. He is currently battling with Mario Manningham for the number two receiver slot behind number one Steve Smith, giving the Giants a bounty of fantastic young receivers. Last year saw Nicks catch 47 passes for 790 yards and six touchdowns, giving him an outstanding 17 yards per catch. The kid is fast, real fast, and on a strong New York team he should be a viable Fantasy option for anyone this season.

6.  Justin Forsett, RB, Seattle Seahawks: A sixth round pick, no one expected much from the slightly smaller Forsett. But last year on an anemic run offense he showed some flashes of brilliances, including a 5.4 yard per carry average, tops on the Seahawks. He finished with 619 yards rushing and four touchdowns on the season, and with the team clearly having lost faith in Julius Jones, Forsett looks to be the starter. There was a slight road bump in the offseason as the Seahawks acquired LenDale White from the Titans, but they quickly released him, helping to reassure Fantasy owners that Forsett could be a viable option at the RB position.

7. Ahmad Bradshaw, RB, New York Giants: Last season, Bradshaw rushed for a career high 778 yards on 163 attempts while scoring seven touchdowns. Giant starter Brandon Jacobs only slightly rushed for more, gaining 835 yards on 224 attempts. Bradshaw is the lightning to Jacobs’s thunder, a true home run threat every time he touches the ball. Even if Jacobs can rebound from a poor season, expect Bradshaw to continue to receive a ton of carries and be a Fantasy star.

8. Donald Brown, RB, Indianapolis Colts: Brown wasn’t left with much of a chance in his rookie season with the Colts, only earning 78 carries for one of the league’s worst rushing offenses. But this season, if incumbent starter Joseph Addai struggles at all, expect Brown to split carries and maybe even earn the starting spot with the AFC defending champion Colts.

9. Mike Wallace, WR, Pittsburgh Steelers: Wallace is fast, as in Speedy Gonzales fast. He emerged on the scene last year to replace Nate Washington and caught 39 passes for 756 yards and six touchdowns. Wallace is projected to be the starter opposite Hines Ward this season and the only downfall will be quarterback Ben Roethlisberger’s four-game suspension to start the season. But Wallace still has the capabilities to have a 1,000-yard receiving season with ten touchdowns.

10. Golden Tate, WR, Seattle Seahawks: Mmmmm….donuts. When not breaking into Seattle donut chains, Tate possesses the ability to be a top end receiver. With last year’s star acquisition T.J. Houshmanzadeh not performing to expected levels for the Seahawks, expect Tate to step in and get reps immediately. He showed at Notre Dame he has quick feet and good hands which will translate well into new Seahawk coach Peter Carroll’s offense.

By Daniel Olson
Tags: 2010 NFL Draft Kit
This entry was posted on Friday, August 27th, 2010 at 12:54 pm and is filed under 2010 RotoRob NFL Draft Kit, Daniel Olson, FOOTBALL, Sleepers. You can follow any responses to this entry through the RSS 2.0 feed. Both comments and pings are currently closed.