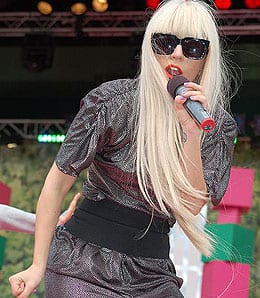 Picking a kicker can be as confusing as shoe shopping with Lady Gaga.

The 2010 RotoRob NFL Draft Kit is back, with yet another cheat sheet to help you prepare for your draft. While you wonder if the Houston Texans will ever make the playoffs, let’s take a look at the top 15 place kickers.

There are Fantasy owners out there that believe that locking up an elite kicker in the middle rounds is one of the keys to success. Seek out these owners and invite them to your league; they are known as “contributors” — and are key to your Fantasy financial success. While almost every Fantasy league requires you to start a kicker, trying to predict which of the boatload of booters out there will put up big numbers is nearly as confusing as going shoe shopping with Lady Gaga. As an example, last year’s top kicker — Nate Kaeding — finished just seventh in kicker scoring in 2009 and tenth in ’07. The 2008 champ finished sixth last season, while the ’07 king finished seventh the following year. While a group of kickers have enjoyed consistent success over the years, their respective ups and downs defy Fantasy prognostication, and it’s not a puzzle you should endeavor to solve.

That being said, successful Fantasy owners do keep a few principles in mind when spending that final draft pick on their place kicker. Obviously, a team with a potent offense – and especially a strong running game – will usually produce a bundle of field goal attempts. Many owners also heed the climate in which their chosen kicker plies his trade, with “warm weather,” or, even better, dome kickers winning a great deal of Fantasy favour. It’s definitely preferable to watch your kicker lining up his placements in climate-controlled comfort than to be sweating out a 45-yarder in swirling snow with a 25 mph crosswind.

It’s perfectly okay to wait until the last round to draft your kicker in most leagues, though it’s acceptable to jump forward a round if there’s a guy you particularly like.

1. Nate Kaeding, San Diego Chargers (1): Kaeding tied for the NFL lead in field goals last season, and his 50 extra-points led all kickers. The Bolts booter has compiled at least 118 points in each of the past four seasons, and racked up at least 127 in three of those campaigns. He is currently the most accurate kicker in NFL history, possesses solid range and plays half his games in one of America’s best climates. The Chargers figure to light up the scoreboard again in 2010, and Kaeding will be there to knock it home when the scoring machine stalls short of pay dirt. What’s not to love? Oh right…his playoff performance last season.

2. Ryan Longwell, Minnesota Vikings (1): Longwell is one of the game’s best dome kickers, and he’ll be indoors for the Vikes’ Week 13, 14 and 15 games this season. He has a strong and accurate leg, having converted all eight of his attempts from beyond 50 yards over the past two seasons. The return of Brett Favre (have you heard about that, by the way?) buoys Longwell’s Fantasy worth, since Tarvaris Jackson does not appear to be ready for a starting NFL gig.

3. Stephen Gostkowski, New England Patriots (1): Gostkowski has averaged 137 points over his past three seasons, and 31 field goals his past two campaigns. He has attempted just five field goals from beyond 50 yards in his four-year NFL career, but his 85.1 field goal accuracy overall is sixth best in NFL history. Gostkowski is money in the bank (one of those good, no-bailout banks, mind you), but beware his late season schedule: road games at Chicago and Buffalo, sandwiched around a home tilt against Green Bay. Gostkowski is a fine “mudder,” but the potential for gruesome weather looms during his Fantasy playoff weeks.

4. Mason Crosby, Green Bay Packers (2): None of Crosby’s three NFL seasons have seen him produce fewer than 127 points or 27 field goals, and 2010 should bring more of the same. Crosby is not the most accurate kicker out there, and his aim tends to drop along with the thermometer – not a good thing when you call the Frozen Tundra home. Still, the Packer offense should be a veritable pinball machine again this season, meaning Crosby should see plenty of opportunities to pad his scoring total.

5. Garrett Hartley, New Orleans Saints (2): Hartley was suspended for the first four games of the season last year, then watched his teammate John Carney handle kicking duties until Week 13. Once he made it onto the field, though, Hartley was very good – knocking home nine of his 11 field goal attempt and converting 10-of-11 extra point tries. The Saint kicker carries some level of risk, as his pro career consists of just 13 games, but if he can keep it together he could be in for a monster season.

6. Rob Bironas, Tennessee Titans (2): After a slow start, Bironas piled up 68 points in the second half of the ’09 season, and he should maintain that form if quarterback Vince Young continues his renaissance. Bironas has a strong, accurate leg – he boomed five field goals from 50-plus yards last season – and should once again be among the league scoring leaders, given the opportunities.

7. David Akers, Philadelphia Eagles (2): Akers has amassed 283 points and converted 65 field goals over the past two seasons, and he has been arguably the league’s best kicker during that period. He ranks this low on our list due to the uncertainty surrounding the Eagle offense as it adapts to life without Donovan McNabb and Brian Westbrook. Feel free to talk up the gloom and doom of this eventuality in front of your league mates – in the hope that Akers slips to you in the draft, of course. We think Kevin Kolb will be everything McNabb was and more, and Akers should keep racking up the placement points in 2010.

8. Jay Feely, Arizona Cardinals (3): While with the Jets, Feely finished seventh in kicking points last season, and he could be even better in the desert this year. His accuracy has improved since his early days in Atlanta, and his leg strength remains solid. Feely is a decent low-end No. 1 kicker, but be prepared to cut bait if the Cardinals offense sputters with Matt Leinart at the helm.

9. Matt Prater, Denver Broncos (3): Prater followed up a strong rookie campaign with an even better season in 2009, improving his accuracy and maintaining his aptitude from long range. The Denver offense has produced 68 field goal attempts over the past two seasons, but extra point tries could be in short supply in 2010. Prater carries some risk, but he should produce enough to warrant starting most weeks.

10. Lawrence Tynes, New York Giants (3): Tynes posted a career high 126 points last season, and tied his lifetime NFL best by knocking home 27 field goals. He should receive plenty of scoring opportunities for what looks to be a good, but not great Giant offense. A note of caution for you weather watchers: the Giants will be in the sometimes blustery Meadowlands in Week 15, and on Lambeau’s Frozen Tundra for a Week 16 tilt with the Packers.

11. Robbie Gould, Chicago Bears (3): Despite playing half his games in the Windy City, Gould is one of the league’s most accurate kickers. He struggled through a sub par season in 2009, but should be a solid choice as a low-end No. 1 Fantasy kicker again this year.

12. Jeff Reed, Pittsburgh Steelers (4): Reed has a rep as a scatter-legged kicker, but he has converted at least 87 per cent of his field goal tries in each of the past three seasons. He is not very accurate from beyond 50 yards, though, and his lack of range relegates him to low-end starter status in most Fantasy leagues.

13. Dan Carpenter, Miami Dolphins (4): Carpenter converted over 89 per cent of his field goals last season, and racked up a serviceable 112 points for Miami’s pedestrian offense. The Fins should employ a ground-pounding attack again in 2010, and if quarterback Chad Henne continues to develop, Carpenter could be a prime beneficiary.

14. Matt Bryant, Atlanta Falcons (4): Bryant took over as Atlanta’s kicker in Week 13 last season, and could be in line for some nice numbers as the team’s full-time booter in 2010. He knocked home 131 points for Tampa Bay back in 2008, but bear in mind that he is just 3-for-12 in his career on field goals of 50-plus yards.

15. Shayne Graham, Baltimore Ravens (4): Graham is currently in a battle with Billy Cundiff for the Ravens’ starting gig, but we expect Graham to win the job. If you’re looking for a lower-end Fantasy kicker with plenty of upside, look no further than Graham, who knocked in 130 points for Cincinnati back in 2007. Baltimore’s offense is typically field goal-friendly, making him a sneaky pick in larger Fantasy leagues.

By Buck Davidson
Tags: 2010 NFL Draft Kit
This entry was posted on Monday, August 23rd, 2010 at 12:17 pm and is filed under 2010 RotoRob NFL Draft Kit, Buck Davidson, Cheat sheets, FOOTBALL. You can follow any responses to this entry through the RSS 2.0 feed. Both comments and pings are currently closed.