The Wire Troll: This Bud’s For You 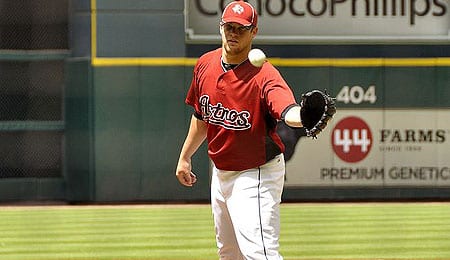 The Astros have been working Bud Norris hard lately, but he’s showing no ill effects.

It’s getting to that time when we can start looking forward to September callups. I’ve expanded the Wire Troll this week to include some of the possibilities for September, so to avoid the rush, you should start shopping now for those players that can bring assistance to your Fantasy squad over the last few weeks of the regular season. Without further ado, let’s take a look at this week’s options.

Bud Norris, SP, Houston Astros: Norris has four wins in his past six starts — an amazing feat for a Houston starter — and has gone at least six innings in each of those starts. Don’t expect a repeat of that 14-strikeout performance against the Pirates any time soon, but Norris has turned into a viable option in all formats. Those playing in H2H formats should seriously consider him as an option as a two-start pitcher this coming week.

Russell Branyan, 1B, Seattle Mariners: After going 20 games with only one homer, Branyan has pulled out of his swoon and has now slugged five dingers in his past seven games. He’s still very much an all or nothing sort of guy, but for those needing a quick power fix, Branyan could be just what the doctor ordered.

Aroldis Chapman, RP, Cincinnati Reds: It’s been an up and down first season for Chapman and control issues have been the primary source of his problems. Since moving to the bullpen in August, he’s racked up six saves while allowing only four hits, four walks and two earned runs with a phenomenal 19 Ks in 11 1/3 IP. Batters are hitting a measely .103 against Chapman this month. The Reds sorely need a power southpaw in their bullpen for the stretch run to take some of the pressure off overworked righties Francisco Cordero and Nick Masset.

Hisanori Takahashi, RP/SP, New York Mets: This week, Jerry Manuel named Takahashi as his go-to guy in the ninth. Francisco Rodriguez is done for the year, so Takahashi is a great acquisition if you’re chasing points in the saves category. Takahashi has a solid history in a closer/set-up role and did earn 15 saves for the Yomiuri Giants back in 2006. In leagues with designated slots for both starting and relief pitching, you get an extra bonus as he can occupy a starting pitcher slot, allowing you to run an extra closer.

Juan Gutierrez, RP, Arizona Diamondbacks: The revolving door for save opportunities keeps rolling in the desert with Gutierrez closing out Saturday’s game against the Rockies. He appears to be the current flavour of the week, so if desperate times require desperate measures go get him and pray his problems with the long-ball are a thing of the past.

Jesus Montero, C, New York Yankees: Jorge Posada isn’t getting any younger and Francisco Cervelli is now 2-for-August. Montero has been solid at Triple-A with 16 homers, 60 RBI and .285 BA, offering the Yanks a very nice insurance policy and some depth for their stretch run.

Matt Belisle, RP, Colorado Rockies: Is Huston Street hurting? You have to wonder if the Rox closer is okay when in his last four outings he has allowed eight hits, five walks, and five runs (three earned). Belisle, on the other hand, has allowed 10 hits, one free pass, struck out 14 and has not given up an earned run in 10 1/3 IP in August. Despite the endorsement of Street by Jim Tracy — or is that the kiss of death? — a change could be coming in the Mile High City.

Ross Ohlendorf, SP, Pittsburgh Pirates: The 28-year-old has very quietly been putting up solid numbers over the past six weeks. He does have St. Louis and Milwaukee on the agenda this week, but for Fantasy owners in H2H leagues, Ohlendorf is an option.

Ivan Nova, SP, New York Yankees: Andy Pettitte isn’t getting any closer to returning and Nova was enjoying a great season down on the farm. In 145 IP at Triple-A Scranton, Nova allowed 135 hits and 48 walks while striking out 115 with a great 2.86 ERA. He should get at least a couple starts down the stretch while the Yankees sort out their rotation.

Will Rhymes, 2B, Detroit Tigers: Rhymes is an all-speed, no power middle infielder, but he is playing on a regular basis and with playing time comes opportunity, making him worthy of a look in AL-only leagues.

Mark Trumbo, 1B, Los Angeles Angels: I really thought the Halos would take a look at Trumbo long before September, in fact we picked him as a possible wire selection way back at the end of May when Kendrys Morales went down, but I guess we won’t see Trumbo until September after all. Morales’s celebration-induced injury left a huge hole at first base for the Angels that was never filled, but Trumbo and his jumbo power (29 homers and 101 RBI at Triple-A) could spell some relief.

Yamaico Navarro, 2B, Boston Red Sox: Dustin Pedroia’s return from his fractured foot lasted a whole two games. The BoSox have turned to Navarro, 22, who managed to slug 11 homers, drive in 60 runs, swipe 18 bags, and compile a decent .272 BA in 382 at-bats at two levels in the minors. Navarro is a solid option in AL-only leagues while mixed leaguers should keep this situation filed away as there is no current timetable for Pedroia’s return from this DL stint.

Jordan Zimmerman, SP, Washington Nationals: Zimmerman’s rehab looks like it’s run its course and it was a very successful one at that. The Nats will be very cautious with Zimmerman, especially in light of the impending visit Stephen Strasburg has with Dr. James Andrews. Expect Zimmerman to be on a very strict pitch count, so tempering your expectations here would be the prudent route to take in the short term.

Josh Bell, 3B, Baltimore Orioles: Be;; smacked two homers Saturday against Cliff Lee. How many can lay claim to that feat?

Eduardo Nunez, SS/3B, New York Yankees: Alex Rodriguez has hit the DL with a strained left calf and the Yankees welcome Nunez, 23, to the fold. Nunez brings speed (23 stolen bases at Triple-A) and infield flex for those playing in AL-only formats.

Mike Moustakas, 3B, Kansas City Royals: Wilson Betemit is not the answer. Do we have a September callup in the works for KC’s top prospect?

Brandon Allen, 1B, Arizona Diamondbacks: Does the fact that Adam Laroche is rumoured to have been put on waivers mean we’ll be seeing a lot of top prospect Allen in September?

Jim Thome, DH, Minnesota Twins: With four homers in his past ten games, the vet is proving he can still smoke the long ball.

By Tim McLeod
This entry was posted on Sunday, August 22nd, 2010 at 5:03 pm and is filed under BASEBALL, The Wire Troll, Tim McLeod. You can follow any responses to this entry through the RSS 2.0 feed. You can skip to the end and leave a response. Pinging is currently not allowed.